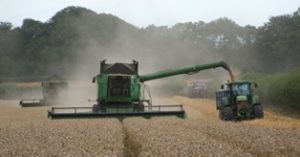 We have had great fun this year with another demonstrator combine, it has been here for much of the harvest, very fortunate considering how the weather has messed us about for so much of the time.  We have at last pretty well finished, being just left with one small field of beans which are not yet fit, and the three fields of sunflowers, which we hope will be ready to cut before the end of the month.  We could not have had this combine here for so long if we had not made pretty clear noises about our intention to buy it, the old one has now done eight seasons, which is a lot of work on this acreage, and we feel we can justify the new one.  The old machine has processed something over 60,000 tons of material in its life, by passing it all through a gap of no more than an inch and a half, 66 inches wide, which is the widest gap at which you can set the threshing drum.

The new machine, a John Deere STS, utilises a different threshing system to that we have used before, it gets greater output from a similar sized machine by using a more aggressive approach, the straw ends up much more beaten up because of this, which is fine for some straw users, but not for others.  Also, if it gets rained on, the more mashed up straw takes longer to dry out, and will probably need fluffing up with a tedder before baling. 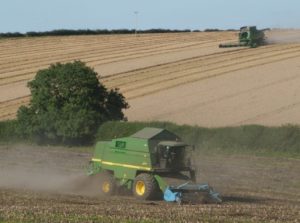 The first picture here shows our old combine in the foreground, with a special header on the front, which we hired in to pick up the borage, a new crop to us, with its own unique challenges.  It was swathed by a contractor with a special machine at the beginning of August, and then endured about three inches of rain whilst it was lying in the swath supposedly drying out, before we tried to pick it up last week.  Some of it was very close to the ground, which was still wet, that we had to have two goes at it.  We have now got a small heap in the barn, but quite a lot of it is soil and stones, which we will get cleaned out when our seed cleaners visit later in the autumn.  In the background of the first picture is the STS, steaming through some wheat on the other side of the road, using its sat nav system, which steers it automatically.  Once you have plotted a line up one side of the field, The machine maps out the field in 30 foot strips,(the width of the header), and will then steer itself down the nearest line you point it at when on the headland.  The second picture shows how well this works, it means more time is spent with the machine cutting with a full header, the driver can pay more attention to other settings, such as getting a cleaner sample of grain in the tank, it is also less tiring if you haven’t got to steer the header to the edge of the corn all day, all good for productivity! 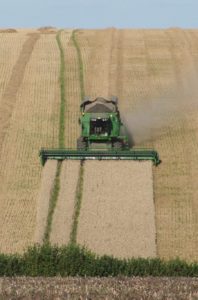 The price of grain has been in the news lately, having rocketed up around the world over the last few weeks, putting a grin on the face of arable farmers who didn’t sell too much grain before harvest, and a groan on the minds of stock farmers, who still have to buy this expensive feed for their animals. 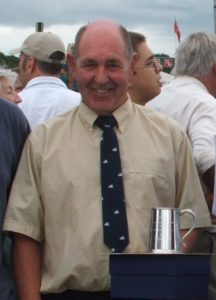 On Saturday we had the excitement of a trip to the Dorchester Show, where the highlight was seeing Norman Hardy receive a long service award for over 40 years spent working on the same farm, firstly with Mr Humphrey Gifford on Durweston Farm, and then since 1973 on Travellers Rest and Durweston Farms.  This remarkable dedication to a career in the countryside was marked by the presentation of an engraved tankard and a certificate by the President of the Show, as well as lifetime membership of the Dorchester Agricultural Society.  Refreshments were then enjoyed in the members area! 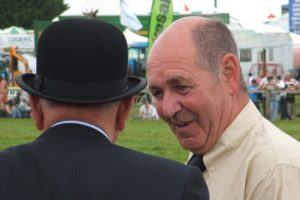