Well that was a humdinger of a harvest.  Having started on 14th July, pretty normal timing, we finished the wheat on 18th August, which is the earliest since 1995, however we hadn’t finished harvest completely because the poppies weren’t fit until after it started raining, and we couldn’t complete cutting them until last week, on Sept 8th.  As soon as the harvester was out of the field we were in with the combine to tidy up the mess the poppy harvester leaves, and to collect another few tonnes of seed from the odd stalks that fall over and are missed by the contractor’s machine, a modified forage harvester with a specialised header.  It only cuts off the tops of the plants, so we have to cut off the stalks before we can cultivate. 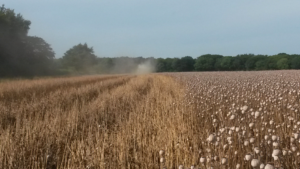 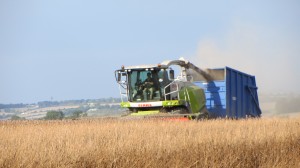 The lovely August weather has given us the easiest harvest for many years, day after day of sunshine and no serious night dews meant that we were able to cut most crops without having to dry them, saving on drier fuel, and the combine behaved itself with very few breakdowns, meaning we had 13 cutting days on the trot, something of a rarity in the recent past.  Yields have been pretty average, mainly because of the poor weather in June, although grain quality is good.  The merchants tell me that as quality is up, we should have less need to import the higher quality bread-making wheats this year, and because we have lower yields, we will have less grain to export, which we must hope might lead to a slight improvement in prices. 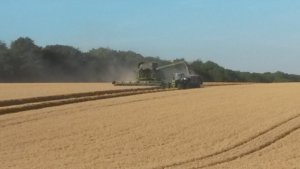 The Brexit vote led to a fall in the pound for a short time during harvest, which translated into better grain prices, but since then the nonsense talk of a brexit bounce has seen it rise again, and we are now £10 per tonne back below the top price available when everyone was too busy harvesting to actually sell anything.  Where we will end up once all the necessary trade deals have been made and a new agricultural policy has been cobbled together, is anybody’s guess. 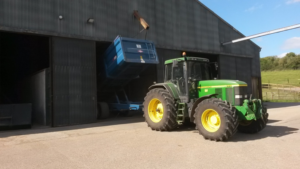 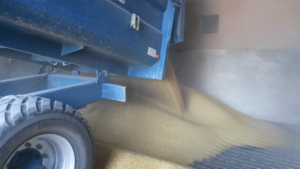 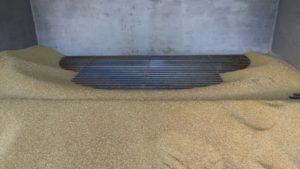 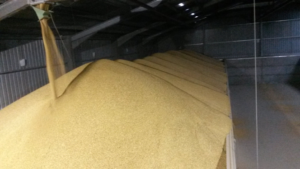 As well as cutting and hauling grain into the store, there is straw to bale and haul, and lorries to load out to make sure there is enough room in the store to fit the harvest in, we usually ship out the rapeseed as soon as it’s cut.

Here is the handler picking up a bucketful of rapeseed to put into a lorry. 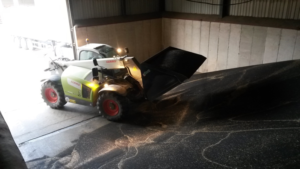 Once there is some ground cleared, Gary moves in with a selection of cultivation machines, this could be the discs to create a stale seedbed, or a subsoiler to work in the recently applied chicken manure. We also buy in and spread some fertiliser on the seedbeds ready for the next crop.  Last week some of this material arrived in a lorry with a ‘walking floor’, and the floor was not up to the task of pushing the fert out onto the yard floor.  This presented a problem, either we have to shovel out 24 tonnes of stinky grey stuff by hand, or we have to build a ramp out of previously delivered fert and drive our handler up into the lorry to dig the stuff out.  This seemed pretty radical, and was not something I had done before.  There was less than 2 inches clearance on each side, and I did not want to damage the lorry trailer, or our handler.  Anyway, patience was rewarded, and we managed to extract the whole lot. 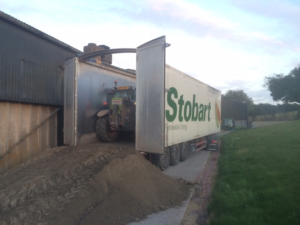 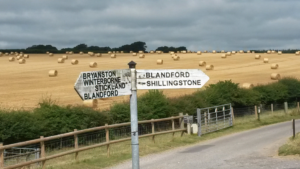 The old fingerpost along the road caught my eye during harvest, with the round bales in the background setting it off beautifully.  The timing was fortunate, because only a few days later the hunt came past on horseback, exercising the hounds, and a kerfuffle with a passing car caused one of the horses to knock off the Shillingstone finger with its back end.  It turned out that the timber is badly rotted, and the whole thing is in need of a rebuild.  Not only that, but the letters are plastic stick on ones, what a disgrace!  The council no longer undertakes maintenance of these old signs, and it is left to volunteers and lesser bodies to take on responsibility for them.  A little research uncovered some very useful pages from the AONB:  http://www.dorsetaonb.org.uk/our-work/rural-roads/fingerpostproject, with advice on materials and where to find them.  I can see a winter project beckoning.  It turns out that Bryanston Parish Council have decided to overhaul the signs on their patch, and have already passed on lots of helpful information, even the roundels on the top of the posts can be repaired or even completely replicated if they have gone missing. 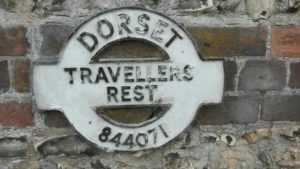 The endpiece of this little tale takes us right back to the seventies, when our then combine knocked off the roundel of this particular signpost with its grain unloading spout.  It remained in the farm office for many years until I fixed it to the wall outside the farmyard.  Now I know who to ask to mend it, I hope to get it fixed and reinstated to its rightful home.