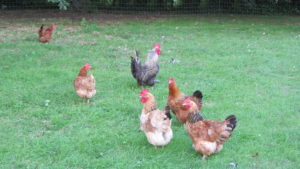 Our cockerel survived a full frontal attack by a fox last weekend, only thwarted by pure luck as I crossed the farmyard and witnessed the foxy scoundrel pounce.  Feathers flew, and then so did the language, only a lot of shouting was enough to get him to drop the bird and run.  Since then our usually free range chicken flock have been penned up in securely electric fenced summer quarters.  As the crops around the farm yard grow taller, the foxes grow bolder and can sneak up close.  No one will be safe now until after we have harvested all the fields and such vermin will have to retreat. 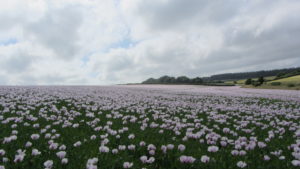 Elsewhere on the farm our crops are edging towards harvest, in spite of the cool and wet month of June.  Endless damp days do our winter barley and especially the wheat no favours at all, rain during flowering inevitably causes fusarium, a fungus, to grow on the ears, it eventually cuts off nutrition to the ears and developing grains, and we end up with shrivelled and blackened grains, as well as reducing the yield.  2012 was the last time we had a very bad fusarium year, and we hope that things will warm up very soon and slow the disease down so that we don’t plumb those depths again. 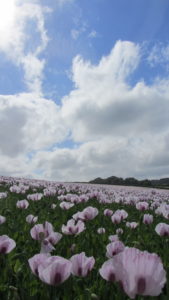 On a more positive note our poppies are flowering beautifully, and have been for much longer than is usual, mainly because they are thinner than normal, and each plant is throwing up branches and extra capsules until the field reaches some ideal level that we do not yet fully understand.  Last year flowering was over in less than a week, this year it has lasted 3 so far, the later sown two fields have just joined in this weekend, and look a picture. 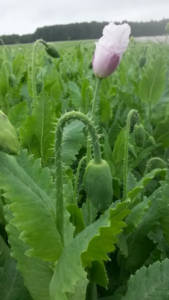 The extending stems are normally quite spiky, and it is interesting to find that subsequent branches on the same plant do not normally produce spikes.  Can anyone explain why this might be? 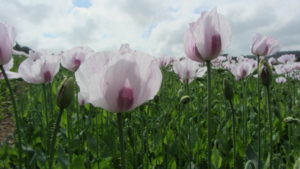 In the field opposite these is a barley crop hopefully destined to be next year’s beer, it looks fine when it’s dry, but the wet is not helping, we need sunshine please. 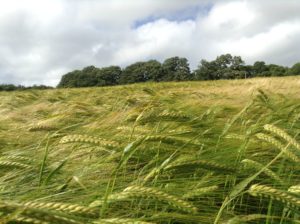 I took a trip to a large arable event in Cambridgeshire last month, where all the machinery manufacturers and other support industries have stands, and pack them with shiny kit and try to attract business.  There are also a number of organisations encouraging farmers to diversify in all sorts of ways, and it was noticeable this year how many had planted attractive wild flower plots on their stands. 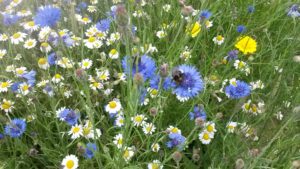 It was surprising to find that although the event is located in a huge flat open field, many insects could be found foraging on these plots, such as this bumble bee on a beautiful Cornflower.  Our own field margins are looking attractive with wildflowers this season, plenty of field scabius, ox-eye daisy and birds foot trefoil, though sadly no cornflowers, something I would like to try sowing here next year. 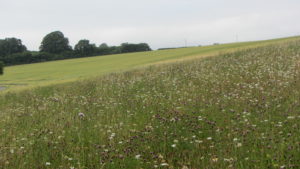 It was rather sobering to find in so many fields of the eastern counties that there are terrible infestations of Blackgrass amongst the wheat crops. 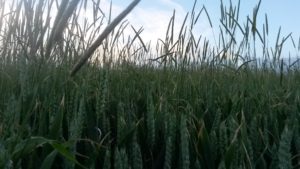 Blackgrass is a serious problem weed which is rendering arable farming extremely difficult in some areas.  It favours heavier soils, and long runs of winter cropping.  Repeated use of the same herbicides over many years, and endless crops of wheat year after year has encouraged resistance to develop in some blackgrass populations  It is a very well adapted weed, it produces vast numbers of seed from every head, and has short dormancy, meaning that it will spread from a few plants to a field wide problem in a very short time, and farmers need to pay very close attention to pulling it up as soon as it is seen, or mowing it off before populations explode.  It can swamp a wheat crop and reduce the yield drastically, many farmers will spray off badly infested fields with glyphosate early in the season rather than risk seed being shed on the soil in large numbers.  Our own wild oat rogueing team is on the alert for it, as we are terrified of a weedkiller resistant invasion. 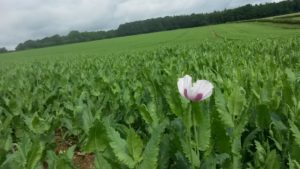 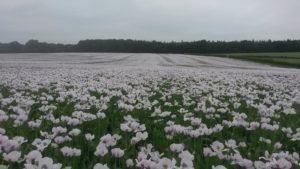