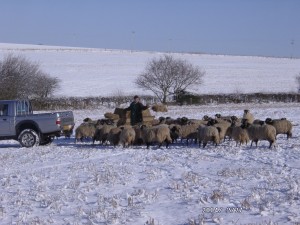 All was going swimmingly until 4.00pm on Thursday (27th), when the snow swept in from the west and rapidly put paid to rolling and cultivations for spring barley sowing.  What had been a lovely dry seedbed soon became a white and tacky mess, which turned the rollers into brown sticky sausage rolls.

Spring sowing had been going well, 120 acres of beans and nearly 100 acres of Golden Promise barley for malt are in the ground, though sadly not yet quite all rolled, if it does not dry out enough to finish the rolling before the seed germinates, then we will have to wait for over a month to finish it, when the plants have got at least 3 leaves. The rolling is very important, because if the flints are not rolled down, they can do seriously expensive damage to the combine. 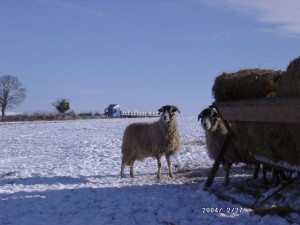 The drier weather recently has meant that we have been able to get going with early spring fertiliser spreading, except that it has been a bit of a stop star affair, deliveries of fert have been later than planned, as our suppliers Mole Valley Farmers have been waiting for a ship load of Ammonium Sulphate to arrive at Plymouth docks.  The icy weather last week didn’t help much either; a 25 ton load arrived here while the lanes were still like an ice rink. 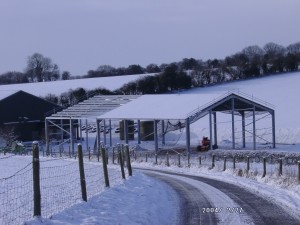 The new grainstore at Travellers Rest is now a reality; the last two weeks have seen the whole steel frame erected, most of the roof and some of the concrete panels installed.  Concreting of the floor is planned for the next week, weather permitting.  The excitement is infectious….

Last week a group of local barley growers visited the Hall and Woodhouse brewery for a very educational tour to remind us what happens to our barley.  When it leaves the farms of Dorset, much barley goes to Southampton to be loaded onto ships to head for the maltings and breweries of Belgium,HollandandGermany, where it finds its way into many well-known and popular lagers.  A smaller proportion of Dorset barley is bought by the maltsters and brewers of East Anglia and the North of England, unfortunately this incurs a haulage charge of at least £12 per ton to get it there, so it needs to be pretty good quality stuff to justify that.  The Woodhouse brewery uses well over 100 tons of barley per week in their brews, it mostly comes from East Anglian maltsters, and sadly not much of it is likely to have originated in Dorset 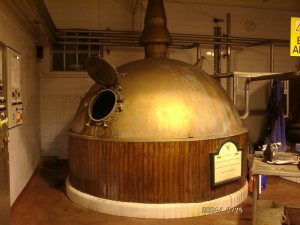 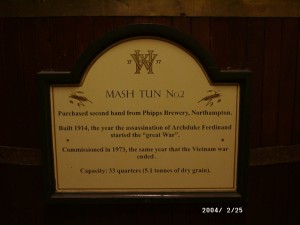 Many Dorset farmers would like to see their barley being used by local Brewers such as Hall and Woodhouse, however this would mean doubling the haulage cost.  The beer market is as competitive as many others, and that extra cost would be hard to absorb, unless perhaps the brewer could be persuaded that using Dorset Barley in their beer would make it more attractive to drinkers, and hence could stand the necessary increase in price.  A few pence per pint only I expect.

You may well recall my previous scribblings about beer and barley, when I have rambled on about the older varieties we grow which are favoured by some of the small breweries such as Ringwood, Palmers, Teignworthy, Youngs and Marstons for their real ales.  These beers require more specific malts with particular flavour characteristics, the barley producing this malt attracts a price premium, and is malted on a small scale in more local floor maltings like Warminster or Tuckers at Newton Abbot.