We finished autumn sowing of all winter barley and wheat comfortably in time for a bit of a break for half term, which is always our target, after a long  and heavy period of work since mid July, when we started harvest.  Most crops have gone into very good seedbeds, with just the right amount of rain so far.  All the earlier sown fields are now a pleasant shade of green, although in some cases the wheat or barley is augmented by unwanted volunteers from the previous crop, which will need attending to sooner or later, before they swamp the crop. 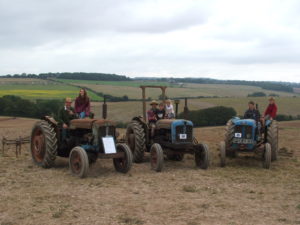 During September Mark Farwell hosted his annual vintage tractor working weekend, we had wonderful time with our collection of 3 Fordson Majors, and gave them a good workout hitched up to some rusty old machines we hauled out of the bushes for the occasion.  It was a joy to see Mike Taylor’s old Massey Harris 780 combine working in the field, cutting some wheat that Mark had left specially for the occasion. 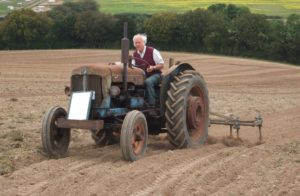 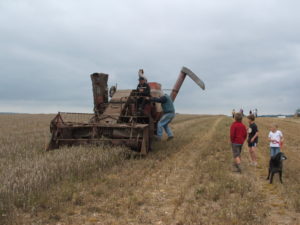 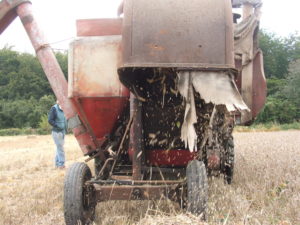 In the last fortnight we have sent off quite a lot of malting barley, which was sold long before the market took off to the stratospheric levels it is now at.  We sold at about £80 per tonne below today’s price, which makes it a bit galling when the buyer still makes a claim for too high moisture levels, admittedly it is what the contract dictates, however knocking off a pound or two per tonne for a 0.13% moisture excess is a bit painful.  The reasons why the grain market has picked up so much over the last year are many fold, however the main driver is a worldwide level of grain stocks at the lowest level it’s been for over 20 years.  Suddenly after years of plenteous cheap food, are some people remembering that food may actually be more important to worry about than petrol for their cars, or their next holiday in the sun?  I wonder.

The malting barley market is a bit different. After years of a market in the doldrums, when many maltings around the world have closed, and farmers have started growing other crops because of poor returns, there is suddenly a real shortage, which has more than doubled the price of barley of the right quality.  To keep this in perspective, it means that the value of the barley used to brew a pint of beer has risen from 0.8 pence per pint to around 1.8 pence!  Likewise, when the baking industry starts whining that the price of bread will have to rise because of the wheat price rise, I should point out that a year ago, the value (to the farmer) of the wheat in an average loaf of bread would have been around 4 pence.  Well that has now risen to more like 9 pence, in a loaf costing say 90 pence, that is admittedly a five percent rise, but some of us would argue that the wheat has been grossly undervalued for a long time!

I suppose I should mention bluetongue disease.  The protection zone relating to the outbreaks in the eastern counties (last reported at Sevenoaks) now reaches as far as a semi-circle to the east of Blandford, running through Spetisbury, Chettle, Ashmore and Shaftesbury.  This is because EU rules state that a 150 km exclusion zone must be put in place around any outbreak.  The disease is spread by the culicoides midge, which is a pretty common little biter.  Of course the midge is no respecter of exclusion zones, and it is highly likely that the whole UK will be a protection zone before long.  A few weeks of frost of course would slow it down considerably, but it will most likely come back next year, in the same way that it has gradually swept across much of Europe in a succession of favourable weather conditions.  It is theoretically perfectly possible to vaccinate against this disease, as we do against a number of others, however, it seems that this will not be possible very quickly.  The following statement from the DEFRA website explains why:

“Vaccine production at Merial (animal drug company) has been temporarily halted since laboratory tests revealed a possible link between the outbreak of Foot and Mouth Disease in Surrey and the Pirbright site and the use of live virus at the Merial facility was suspended. Detailed inspections are urgently being completed at the site and, provided these are fully satisfactory, we hope to be able to allow the use of large amounts of live (bluetongue) virus within the next few weeks, which would enable Merial to re-commence vaccine production.”

In other words, the government’s causing of the foot and mouth outbreak at Pirbright has also managed to prevent the production of a vaccine to stop Bluetongue in its tracks.   According to the NFU the necessary vaccine protection of our livestock won’t be possible until at least half way through next year.  What a bloody cock up.