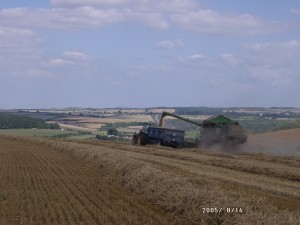 Things have moved on a bit since I last wrote in these pages.  We have just finished harvest, with only minutes to spare before the promised thunderstorm that never arrived.  As an update from last month, the barley test results were good in parts.  It seems so long ago now when we were waiting for a break in the weather and we still had 1300 acres to cut.  The Golden Promise spring barley I was most worried about was between 14 and 20% pre-germinated, which makes it useless for malting, and very disappointing.  The rest of the spring barley, the Optic, although very low yielding, does at least have the required quality.  Most of our wheat this year, which yielded a bit below average, has been of reasonable quality, the breadmaking Malacca should be making its way into loaves sometime in the next few months.

The price of oil will not have escaped most people’s attention recently.  In May we were paying 29p per litre for tractor diesel, last week it was nearly 38p.  Fortunately the weather has been kind, and we have not had to use very much this year to dry the grain, the sun has done it for us. Although the combine can devour up to 500 litres on a busy day. 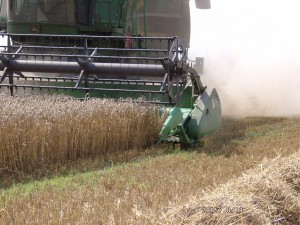 This picture above is of part of a demonstration combine we tried out for a day during harvest.  It is equipped with GPS technology, which is supposed to steer the combine automatically, so the driver can attend to other settings on the machine.  The problem is that it has a pretty wide margin of error, and does not fill the header as well as a real driver.  Also it can only cut in straight lines and cannot cope with bends, not much use on this farm! 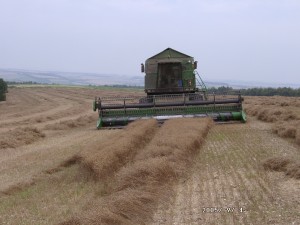 Here we are about to cut the last ten yards, on shillingstone hill, on Sunday afternoon (4th September) at 2.30pm. This was after a long and tedious battle against the linseed, which unless it is bright and sunny with a following wind is a real pig to cut, it wraps around things very easily and drives the driver mad. 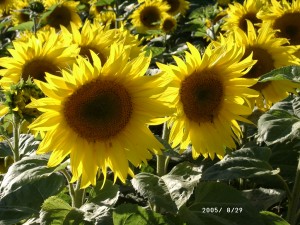 In several areas of the farm this year, we have sown different mixtures of seeds for bird cover and food, including phacelia, vetches, maize, sorghum, buckwheat and sunflowers.  It has been surprising to see how dominant the sunflowers are, however they look fantastic at the moment and are well worth a look.  The most accessible are in Searchlight and Woodclose, and the Knoll is visible from a wide area. 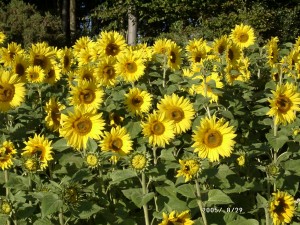