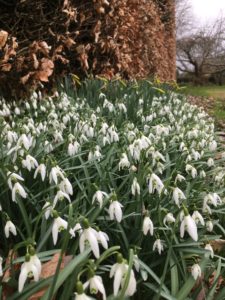 Snowdrops and daffodils; a sure sign that spring is springing, in spite of the cold and wet, which is starting to drive us mad.  We so want to get on with the spring work in the fields, we have 20 tonnes of spring barley seed in the shed waiting to be put in the ground, and 110,000 litres of nitrogen fertiliser to apply to our winter crops as soon as the weather and soils will let us.  We don’t want to make huge muddy ruts in the tramlines, so will have to be patient and wait for the right opportunity.   In the drier parts of the last 3 weeks, we have had contractors delivering and spreading manure and anaerobic digestate, and Gary has applied 28 tonnes of Muriate of Potash to the parts of our fields that GPS-aided soil sampling tells us needs it.

And now for the science:

The main fertilisers we apply to our crops are Nitrogen, Phosphate and Potassium.  We apply as much as we can in the form of livestock manures, but this is time consuming as they are much more bulky than bag fertiliser.  Nitrogen has the most direct effect on yield, it is a major component of chlorophyll, the compound by which plants use sunlight energy to produce sugars from water and carbon dioxide (i.e., photosynthesis). It is also a major component of amino acids, the building blocks of proteins.

Potassium is fundamental to many metabolic processes in plants. These include the synthesis of proteins and sugars required for plant growth. Although only a relatively small proportion of the plant’s total potassium requirement is needed for this. The majority is required for the essential role of maintaining the water content of plant cells.  As with nitrogen, potassium is taken up in large quantities by most crops during the rapid growth phases in spring and early summer. An adequate supply of potassium is required for increasing the thickness and strength of cell walls, hence reducing the likelihood of lodging (the crop falling over). This is also helped by its influence on osmosis and turgor pressure, (using water to keep cells plump and structurally useful). We normally apply Potash in the spring, nearer to the time the crops will need it, also reducing the risk of it being washed through the soil too quickly by rainfall over winter.  Since we started having our soil testing guided by GPS, we have reduced our use of bag potash.  (All our arable fields are soil tested every 4 years).  Many areas of fields have large areas naturally high in potash, where there is no benefit to adding more.  In the past we would apply blanket dressings to all fields, paying no regard to variation within individual fields.  Now the use of GPS technology means we are much more targeted, usually it means we spread more on the areas which are naturally very short of potash, and less where there is plenty. 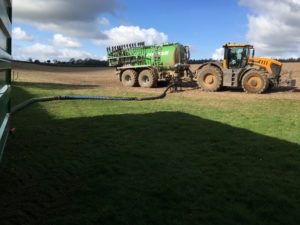 This monstrous outfit has applied 15,000 litres of anaerobic digestate per hectare to our stubbles soon to be sown with spring barley.  It is supported by a nurse tank on the headland which is kept topped up by a stream of lorries.  This digestate will supply nearly half of the nitrogen and much of the potash for this year’s crop.

With most of the manure now in place, we would like to get on with cultivations and drilling please. 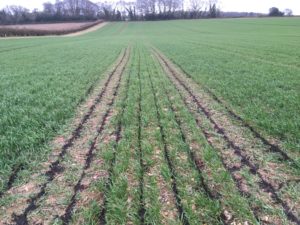 We have also tried for the first time applying the digestate to established crops, this photo shows the effect.  The wheelmarks are a bit worrying, especially as the machine is only 12 metres wide, our tramlines are 36m, so we have to endure 2 extra sets of wheelings between every tramline.  Our hope is that the wheat will recover and we won’t notice in a few weeks time. 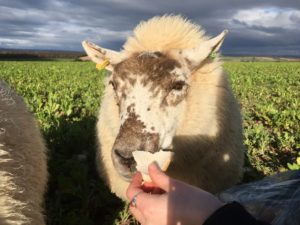 All of our sheep are grazing turnips over at Thornicombe, we wish they would eat a bit faster so we can get on with sowing barley in the same fields.  At least they are in the last field now.  It is always a bit of a balancing act, keeping them on turnips long enough until the grass starts growing, but not so long that we compromise the timing of barley sowing, also not wasting too many turnips. However, we can now pretend they are simply a cover crop, there for the sake of the soil and the environment, rather than just as sheep grub. (see item on trendy cover crops in December issue). 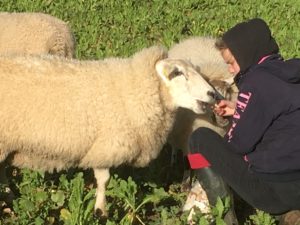 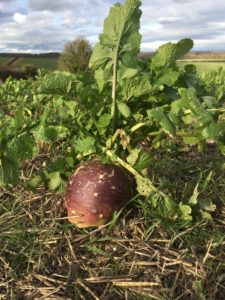 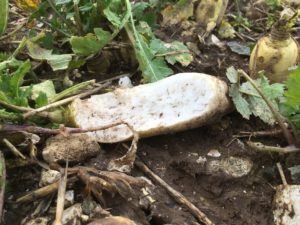 The ewes are at one end of the field, aiming for lambing in about 8 weeks time.  At the other end are the remainers from last year’s lamb crop.  Our old friend John Baily from Farway, in Devon (not Far Far away), has been in with his lorry a couple of times in the last month for a load of lambs, his skilled hands can tell us accurately which lambs are at just the right weight and shape for the butchery trade.

We will keep back some of last year’s ewe lambs for breeding, so they will join the ewe flock next autumn, and have their own first lambs in May next year.

Talking of remainers, dare I touch on Brexit?  UK farmers find themselves in a perilous position right now.  After 40 years of the Common Agricultural Policy, much though we hated it, many of us did all right out of it, thanks to the riotous French farmers, it now feels like we are staring into an abyss.  A straw poll conducted at the National Farmers Union annual conference a couple of weeks gave a resounding ‘non’ when members present were asked if they had any faith at all in our political leaders’ ability to arrive at a sensible deal for home grown food, environment and farming.  It has been said that 70% of farmers voted to leave the EU, turkeys voting for Christmas doesn’t cover the half of it!  I am staggered by this statistic, if true it indicates a truly suicidal tendency amongst my colleagues.  Where on earth are we to sell our lamb, barley and milk products if access to the EU is closed to us, and the floodgates open for all sorts of dodgy food to be imported into the UK under WTO rules, which could mean hormone soaked meat and dairy products from America, and crops grown with chemicals long ago banned in Europe, from Australia, and everywhere else? 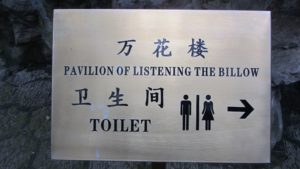 Enough of that, serious though it is, the editor will only cut me off!  This picture of a sign I found on holiday in Shanghai recently I felt rather neatly sums up the hot air that infests the media regarding recent events. 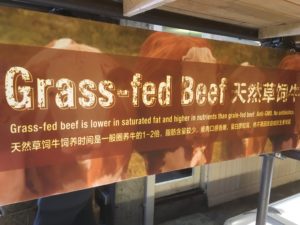 And in case anyone hadn’t realised how switched on the Chinese are in so many ways, this notice in a rather smart restaurant could have been found in Islington rather than Shanghai. Clearly plenty of the wealthier Chinese understand the importance of the provenance of their food.  I couldn’t have put it better myself. 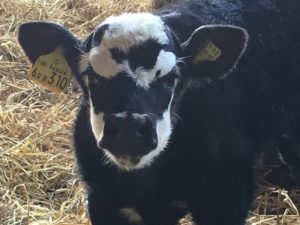 Whilst we were away, calving started, and has progressed steadily over the last 3 weeks.  More than 20 of our 60 cows have now calved, and here is a picture of a particularly attractive little new arrival.  We have had two sets of twins already, and a couple of tricky calvings, involving large calves, which means we have to employ the calving winch, an ingenious device.  To use it we loop light ropes around the feet of the unborn, then position the base of the winch against the rump of the cow, attach the ropes to the winch, then work the handle back and forth, which ratchets itself along a metal leg, gradually exerting pull on the calf, which, as long as the head is correctly presented between the front legs, will slowly reveal itself to the world.  Whilst doing this, the midwives need to watch where they stand, because the cow in her efforts is quite likely to give you a mucky shower if standing in the wrong place. Once the calf is out, the cow immediately forgets the pain of childbirth, and any suspicion of humans, and only wants to give the calf a really good licking, accompanied by constant gentle grunt-mooing.  A cow’s tonge is huge, and quite rough, so the calf gets a very good going over.  This process stimulates the youngster into action, and in only a few minutes will be staggering up onto its wobbly legs, and looking around hungrily for its first drink. 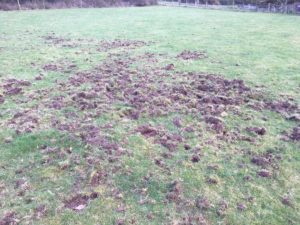 Does anyone know which very annoying wild animal causes this kind of mess in pasture?

And which even more annoying animal does this in remote rural gateways? 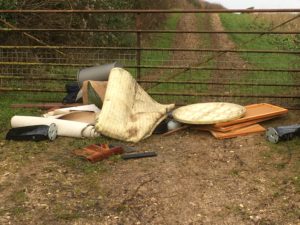