There’s an old saying about there being nothing as happy as a pig in muck, but where’s the one about a pig in apple pulp?  This old sow was certainly happy to guzzle away at the pulp remaining after we had squeezed the juice out of a fair mountain of apples the other weekend.  Freshly squeezed apple juice is delicious, even when the juice is from Bramley apples, though ideally a blend of dessert apples with cookers makes it taste even better. 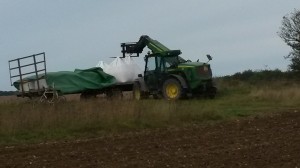 Since my last broadcast we were very lucky to go TB clear at the test I mentioned last month.  This meant that we were able to send our 18 month old cattle to market very shortly afterwards, although the paperwork that had to be processed beforehand nearly caused a postponement.  As with too many areas of modern living, tedious bureaucracy too often gets in the way of getting on with life. 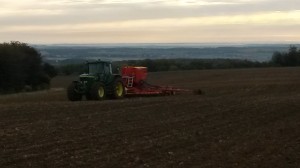 As the weather has deteriorated over the last 3 weeks, we have struggled to complete our autumn sowing campaign, however the team were out in force last weekend, taking advantage of a couple of drier days, and 140 acres of wheat and barley were sown on Saturday and Sunday, into surprisingly good quality and friable seedbeds.  As of today, only one field remains to be sown with wheat, fingers are crossed for another dry break.

What was probably the last school visit of the season at the end of September, was blessed with good weather, lively children, and grateful teachers!  After a tour around various points of interest, we stopped for lunch, after which some of the visitors enjoyed charging up and down the hill, and then found a fine climbing attraction. 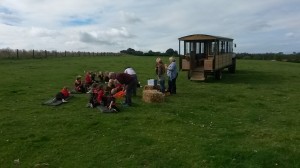 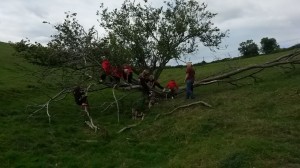 On a similarly non-agricultural note, a couple of weeks ago we hosted a trial day for a new fund raising venture for a well known national charity, who wanted to try out a 100m long water slide in a field with varying slope, so they could experiment with angle of slope and how much water and detergent to add to the slide to give the best ride. 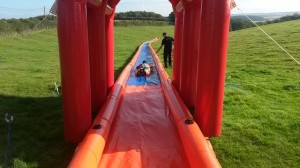 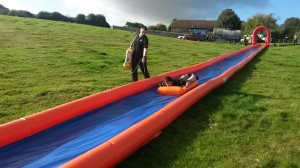 Whilst making my way through the village the other Sunday I came upon this peculiar sight parked alongside the church.  Four of the more senior members of the village were gathered around an unusual carriage that I had not seen before. I wonder if any readers can shed any light on what might have been going on? 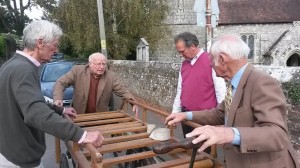 Back on the farm, various wet weather jobs have been enjoyed(!) over the last few weeks, this has involved footbathing, worming and sorting sheep, in all-day incessant rain; cutting logs in the wood, in similar persistent all-day rain, and preparing the haybarn for winter occupation by the cows.  There may be noisy times ahead, weaning time approaches for the calves, and they won’t like it.  The cows will be off to their winter quarters at Shepherds Corner, and the calves will be moved to the yard at Websley, for a diet of silage and straw.  We are changing tack slightly, previously the youngstock have spent the winter outside on stubble turnips topped up with silage, this usually  involves a lot of mud.  So this year we hope they will fare better with some protection from the weather, and a firm straw bed underfoot. 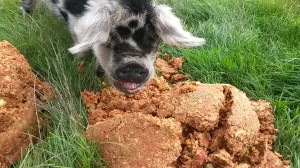 Pork and apple anyone?