It’s a beautiful early spring, the woodlands and hedgerows are bursting with life, colourful flowers are emerging everywhere and the crops are growing well.  There’s plenty of moisture and the warm weather early in the month has brought the season romping along.  Other good news is that our 6 hens are producing a lot of eggs, 5 per day most of the time since January! The crops are several weeks ahead of last year, and a small drawback is that the good conditions mean that weeds and diseases in the crops are also making their presence felt. 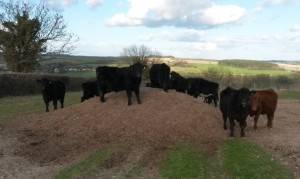 We had a big turn out of cattle last week, the cows and calves are now in two groups, at Folly and in the Glebe, and the youngstock, pictured here playing on a pile of dried chicken muck after breaking the electric fence that was supposed to be keeping them on the turnips, are now on lush grass down in Bucks Close near Middle Lodge.  The bulls are still indoors at Websley, although have had to be kept separate for most of the winter as they have been getting too aggressive with each other.  We are feeding them up in preparation for their busy time of year, due to begin in a couple of weeks.

The shearers are booked for next week, so we are hoping for a bit of dry and warmth for the ewes, who are now not far off lambing.  After shearing we will be spreading them out in the Valley and Glebe area, and as always at this time of year, I would like to ask people to take great care when walking the footpaths amongst and near sheep, especially when accompanied by dogs.  Sheep spook easily, and it only takes one to jump up and run when given a fright, for the whole flock to charge off to the other end of the field, not good when heavily pregnant. 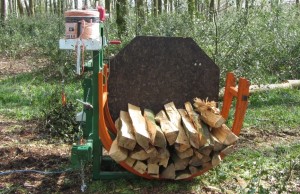 If walking near the woods recently you might have noticed newly cut bundles of next winter’s firewood.  We have been splitting newly thinned beech near Folly, and will shortly be moving on to the fallen trees in Sutcombe wood, where the winter storms knocked over 30 or more beech trees.  The bundling is designed to enable us to mechanise a job that is generally very labour intensive, the bundles can season in the wood, then we can move them with our handler when convenient, and stack them up near the log store for the day when we start cutting them into logs. 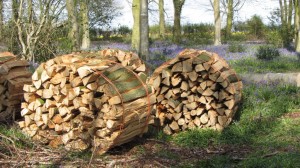 Whilst in the woodland, one can enjoy the bluebell carpet, even as the primroses are still blooming, and this week I happened upon some beautiful early purple orchids which I have not seen before.  The wild garlic is just beginning to flower too, although it is rarely found in the same area as bluebells, and the wood anemones prettily dot the woodland floor with white stars. 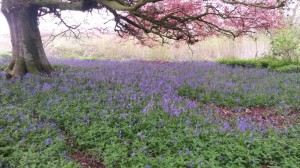 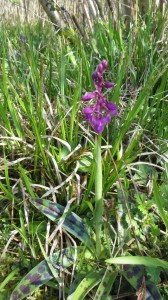 It may be hard to believe that the harvesting of oilseed rape and poppies will only be about 3 weeks apart in the summer, when you see how different their growth is at the moment.  The poppies are only just beginning to be visible, whereas the rape is now at its bold and beautiful best bright yellow. 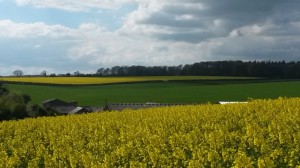 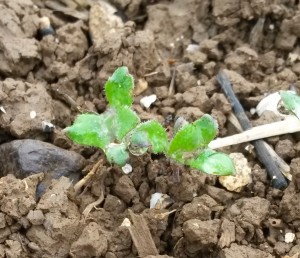 We will shortly be applying the first weedkiller to the poppies, this is a tricky operation, because the chemical we use is a dessicant, rather than a specialized herbicide.  The idea is that it burns off the weeds, and because the leaves of the young poppy are very hairy, it can withstand the dessicant and grow back more quickly and vigorously than the weeds.  We have to be careful with the timing and weather conditions though, because we have managed to do quite a lot of damage to the poppies in the past by not getting it right.

The recent warm conditions have caused a bit of a mushroom and general fungal explosion here and there on the farm, but have you ever bought a log like this and watched shitake mushrooms grow out of it?  Some clever person has developed a technique of inoculating logs with spores of the shitake mushroom, and if kept in the right conditions they will produce beauties ready for the cooking pot in days. 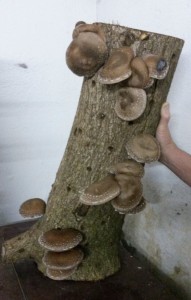 Whilst touring out of the county before Easter, I discovered that there is another country-dwelling creature who lives in a hole very similar to the sett of our old friend Mr Brock.  I wonder whether any readers can identify who might be the inhabitant of this dwelling.  He is a nocturnal fellow, and commonly rolls around in the local farmer’s crops at night rather like Mr Brock does closer to home.  He wears a very spiky coat, and prefers a climate rather warmer than ours.  His name suggests that he might be related to our piggy friends, and even live in a tree, but don’t be deceived.  Find out the answer next month, or look below. 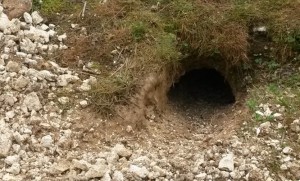 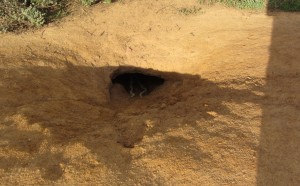 The spiky character is 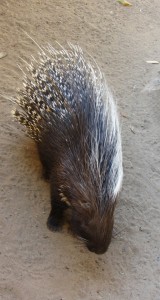