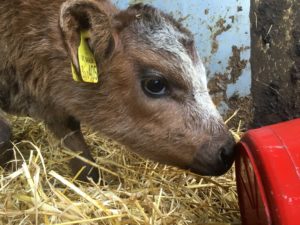 Readers may remember from last month my report of a difficult calving quite late one evening, well this lovely fellow is the result, he is very tame and cocky.  His Mum is still friendly too, but he has taken it to another plane, when bigger he could be a bit of a hazard. He likes bootlaces.

There are just 5 slowcoach cows remaining to calve, our friendly vet did the long-armed exercise this week to decide who really is really in calf and who is pretending, in order to get the best grub.  The vet was here for the second half of a TB test that had been forced upon us.  Luckily we are clear, unlike the farm that caused us to have the test in the first place.  We are normally on annual testing, (soon to be reduced to 6 monthly as the government tightens the rules with ever tougher measures to stamp out TB).  However if a farm gets closed down with a TB breakdown within one kilometre, we are obliged to have a test ourselves.  We have not actually got as far as a one year interval yet, because a one km radius takes in a lot of other cattle farms and plenty of TB, and our last 2 tests have been because of the one km rule, before that we were closed down ourselves for several months.  Having said that, in the last 10 years we have had numerous tests, a few inconclusive results, which have their own special rules, but no confirmed reactors.

Whilst discussing cows, I thought it would be worth sharing this article which a friend sent me last month.  If the price of milk falls when we leave the EU this could be something to try. 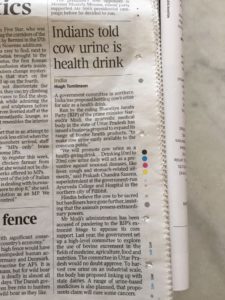 The awful wet March weather has completely stuffed up our spring sowing plans, as I write this on 8th April we have sown just 30 out of 114ha of barley, and no poppies.  This by far the latest we have sown our spring crops for probably 30 years, and I dread what effect such late sowing could have on harvest outcomes.  One should however be optimistic and believe that in some way the season will compensate with a warm dry summer, and the crops will catch up. The winter crops are well behind normal development for calendar date, but they still require fertiliser and various sprays to keep them healthy, which has been tricky during this catchy weather, when soils have been so wet and we don’t want to damage them with heavy machinery when so vulnerable. 170mm rain in March is no joke, the average is 70mm. 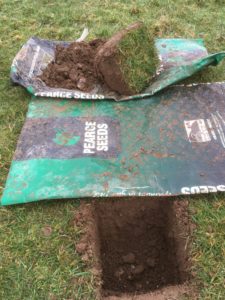 To while away the time during this extremely frustrating cold and late spring, I decided it would be interesting to conduct a worm survey.  This exercise was triggered by reading a message online by a researcher investigating soils and worm activity, based at Rothamsted Research (established in Hertfordshire in 1843).  Called the 60 minute worm project, they have developed ‘60 minute worms’ – a test with a ‘traffic-light’ rating system to signal healthy soil management practices. They were asking for farmers to help to test it.  The assessment involves digging 10 spade-size topsoil pits, sorting and identifying the 3 types of earthworms. 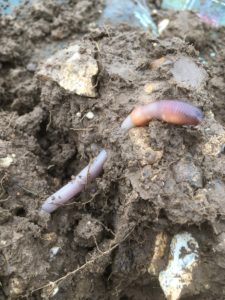 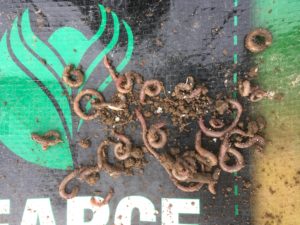 Tillage intensity, crop rotation and organic matter applications all influence earthworm communities in arable soils. The 60 min worms test shows how decisions above the ground influence the millions of earthworms that are engineering the soil ecosystem below.

There is a meeting at Rothamsted next month to deliver the results, and maybe to give us some pointers how to encourage worm activity in our soils.

I dug 10 holes in one arable field with wheat growing in it, finding that worm numbers varied between 28 in one hole, to none in two of the others, with an average of around 10. For comparison I then dug a hole in a 40 year old pasture over the hedge and counted 43 worms. A further 5 holes in each of two arable fields which had been in stubble over winter also yielded approx 10 per hole. Calculations show that this is approx 250 worms per square metre. The experts say that you need 400 per sq m before you can expect any improvement in crop performance. Allowing for 3 worms per gram, 10 worms per spade hole is equivalent to 833kg per hectare. In the grassland this weight is 4 times greater, at 3.3 tons per ha. Much more than the weight of any livestock that good grassland will sustain all year round. An average stocking rate for cows would be 2.5 per hectare, at a weight of 800kg each that is 2 tons. There is an old farmers rule that a stocking rate of 1 cow per acre the weight of flesh (worms and things) under the ground should be higher than on top of the ground for the soil to be healthy.

I found surprisingly few of the large Lumbricus species, the one that digs lovely vertical tunnels which help soils to drain and to keep oxygenated.  Surprising because it is easy to find their middens, little piles of stones or straw around the entrance to their holes, dotted across the soil surface.  Perhaps they go deeper in colder weather.  I must try the test again when the soils have warmed up in a couple of months.

It seems a long time ago now fortunately, but some images from the snowy weather are interesting, this is from the second dose of snow in mid March. 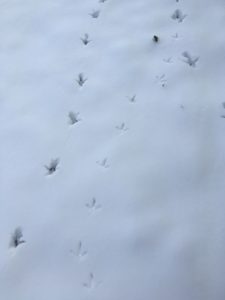 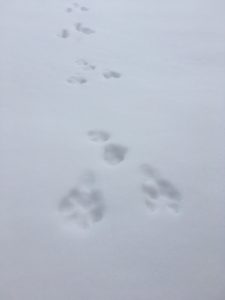 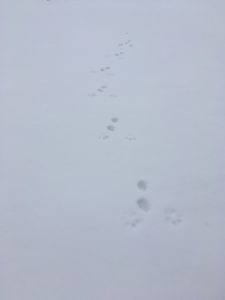 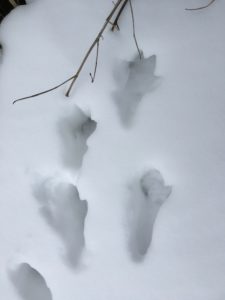 Who has star shaped feet? 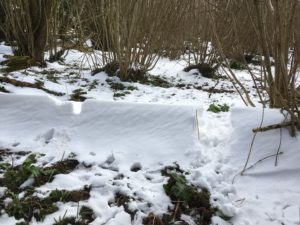 No one stops for snow 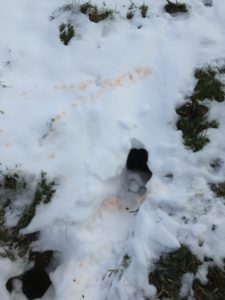 Who knew that rabbits pee was orange, and that they peed everywhere ? 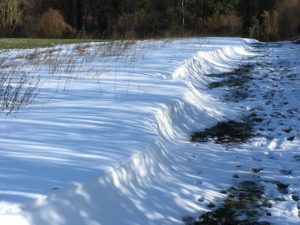