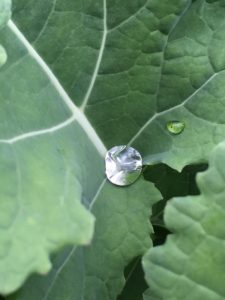 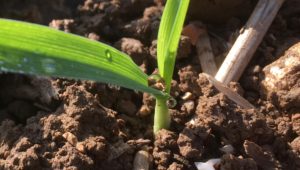 What better way to explain surface tension?  These beautiful drops of dew resting on a rape leaf and a barley plant demonstrate very clearly why we have to pay attention to droplet size and additives when we are spraying pesticides onto our crops.  If the droplets are too big they will just roll off onto the ground.  We can control droplet size by using the right size of nozzle and pressure, and we can affect how droplets stick to the leaf by adding a wetter, a bit like washing up liquid, which reduces the tension of the water droplet and allows it to spread across the leaf, which in turn allows any chemical present to transfer into the plant.

From a less technical angle, this is just an opportunity to marvel at nature.

Our autumn crops are all up and away, the weather has been wonderful for getting them off to a good start.  The lack of rain has discouraged slugs from getting stuck in, and the warmth has allowed plenty of growth, possibly too much in the case of the rape, which is nearly at welly height! 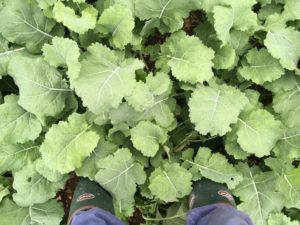 October, traditionally the wettest month of the year, this year has been the driest since 1985, just 48mm  of rain fell, (approx. 2 inches), just enough to keep the crops and grass growing while it has been warm enough.  Here is a lovely sunset from last week. 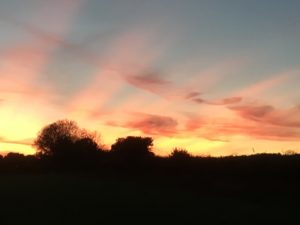 To complete the autumnal theme, the apple harvest has been another stunner, we produced 120 litres of delicious juice in a Sunday afternoon, from a blend of old cottage garden, and bramley apples.  The freezer is now bursting at the seams. 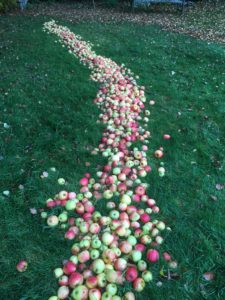 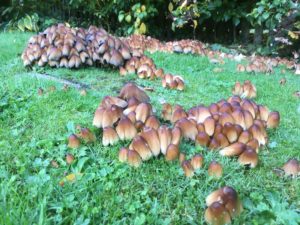 A forest of fungi fighting their way out of the ground.

We are planning to bring the cattle indoors in the next few days, the grass is running out, and the ground is getting wetter, so their big feet will make a mess if they stay out much longer.  The calves will be weaned into the yards at Websley, where we have been repairing the floor to try to improve the drainage.  Water had been running in the wrong direction, so some of the straw inside was permanently wet last winter.  We relocated some of the chalk floor from outside to in, and brought in a few tonnes of road planings and stone to alter the levels so that the gradient now flows from inside to out, we hired a really neat rotating laser level which helped us to get the levels right, and a good heavy roller to finish the job properly.  It seems a shame to spoil the clean and neat effect by bringing in a load of un-housetrained cattle. 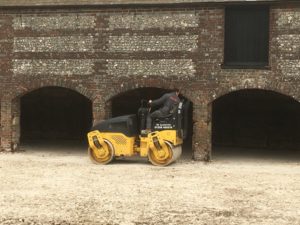 One of those necessary post-harvest jobs that keeps getting put off is cleaning the combine and painting the header, to stop it rusting.  We have managed the header, but the combine is still a dusty shade of green.  The men from Smarts have already begun the combine’s winter service, and this year they have discovered some very worn parts, which are eyewateringly expensive to replace. 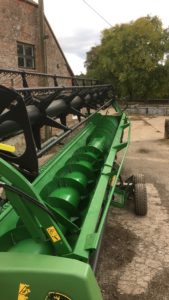 The combine has now 10 seasons for us since new, and this year performed as well or better than in any year since we bought her.  Much of this is to do with the easy cutting conditions this summer, but also has a lot to do with careful servicing, and the replacing of suspect parts before they fail, rather then in a rushed emergency on a boiling hot day in August. 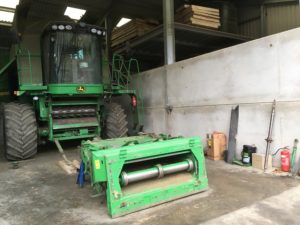 I have a particularly sad tale to relate  this month; hooligans have been driving into our freshly sown barley fields at night, and charging around chasing hares, presumably with dogs, killing the hares and leaving them behind.  In one 50 acre field we found 3 dead hares.  This would be the whole hare population for this particular field, where I used to enjoy trying to count them as they run about when working there.  This kind of cruel and destructive activity is utterly depressing to witness, worse than fly tipping, which is on the rise, and equally mindless, but when innocent and relatively rare animals suffer in this way one is rendered speechless. 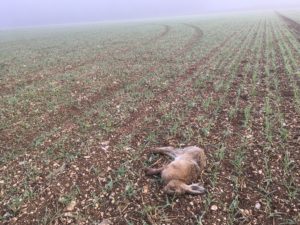 On a lighter note, spotted as part of a wedding cake in Puddletown, Shaun the sheep and his friends: 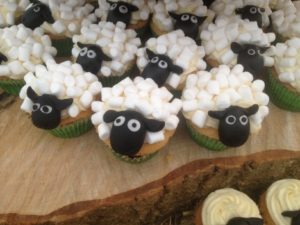 You may have seen in the press recently an account of a visit by members of the Royal Family to Prince Charles’ Poundbury ‘village’ in Dorchester.  One of the events they participated in was the opening of a new Hall and Woodhouse pub, the Duchess of Cornwall.  There were a selection of beers on tap, quite a bewildering choice in fact, as is H&Ws way these days.  (not my picture) 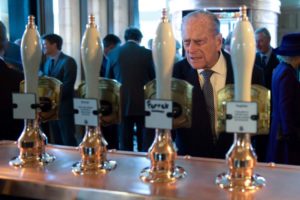 Shall we run a caption competition?  Add your suggestion in the comments box below.