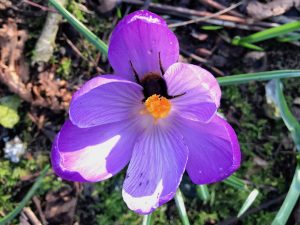 Who woke this poor bumble bee up on 23rd February? It was surely too early when there is so much potential winter still ahead.  The bumblebee conservation.org website tells us that all the old season queens, males and workers die at the end of each year, leaving only a new crop of already fertilised queens to hibernate and create a nest of young for the new season. I wonder if this was a young queen I found head down in a crocus.  I fear she would have been disappointed because I doubt that much nectar was yet flowing. 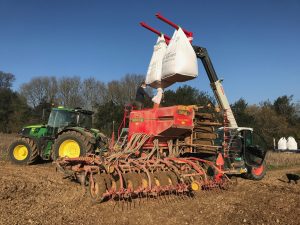 Worrisome times for bees, however farmers were happy with the spring preview, it gave us a chance to get some barley sown, into amazing soil conditions for February.  We managed around 72 of the planned 114 hectares of spring barley before the weather reverted to type, and since then not a single wheel has rolled in the arable department.  Prior to sowing we had the usual early spring rush which always happens when the weather comes right. Muck, lime, digestate, biosolids and fibrophos fertiliser spreading proceeded at great pace, with several different contractors involved, then Gary was flat out with different machines to suit different soils, to get these organic fertilisers worked in. The latest word from DEFRA is that incorporation times are soon to be shortened for these types of manures, from 24 hours to just 12.  This could be a challenge, because the muckspreaders can cover the ground far quicker than we can get it cultivated.  The reason for this change is to prevent ammonia being lost to the atmosphere from the manure, which is a sensible enough desire, if we can deal with the logistical difficulty, though volatilisation of this kind is less of a problem in the cooler weather of February, than it is in autumn, when we spread in front of oilseed rape. 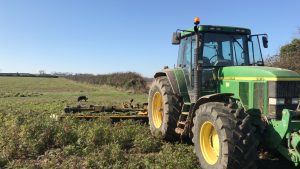 Another job needing to be done before we could even spread manure, was to finish the topping off of the cover crop, so it wouldn’t block up the cultivator.  It seems a shame to cut off all this lovely foliage which has kept the soil healthy over winter, but we somehow have to sow a harvestable crop, and as the cover crop remains slowly rot down, it will supply some of the nutrient required by the next crop as it grows through the year. There will still be some available for next year’s crop too, the organic content of the soil should rise a little, and we are also providing the worms with something to work on.

The blades on machines like the topper hitched to the tractor pictured are driven by a PTO (power take off) shaft which connects to a stubby shaft that sticks out the back of the tractor. These shafts when new are neatly protected by shiny plastic guards, which sadly never seem to last very long, the plastic gets damaged, or it gets brittle and breaks.  None of them seem to be fit for purpose.  As well as being flimsy, you need tiny triple-jointed hands and fingers to attach the shaft to the tractor, and the guard make its almost impossible to apply the all important lubricant to the shaft bearings, which allow the shaft to flex as the machine moves behind the tractor, and at the same time deliver continuous power.  The all-important element in the design is the Hardy-Spicer universal joint, but neither Mr Hardy nor Mr Spicer seemed able to invent a guard to match the ingenuity of the universal joint.  I have been trying to find a new design of guard which might last longer, and even allow easier lubrication.  At last, after a long search, I have found the answer to my prayers, in the shape of a very robustly designed guard, made in Australia, which, fortunately, is available in the UK.  The first one arrived yesterday, and as billed, I found it very easy to install, it allows easy coupling and lubrication, and should keep the health and safety inspector happy. Result. 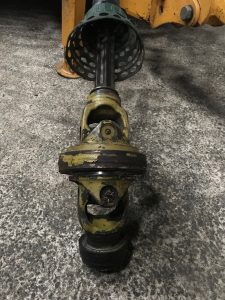 Here is a picture of the double universal jointed shaft on the topper, with the remains of its broken guard, and below is the same shaft safely ensconced in its new guard. (It is double, to allow a sharp turning circle for the tractor without fouling the shaft.)  The front part unclips and is removed easily, and the rear part unclips and slides back.

In order to get the spring barley fields ready for sowing, we had to abandon some of the turnips, and put all the sheep into one field together.  The lamb numbers reduce every time we have a visit from our friendly fieldsman John Bailey, he took another 43 this week, and only 25 or so remain, so they, and the ewes have now been spread thinly on the grass fields, so we can complete the barley sowing.

Having not had a sheep dog on the farm for several years, we have to use every resource at our disposal to move the sheep in the right direction.  This usually involves a lot of running, but can also include bribery, of the small number of tame sheep, formerly orphan lambs, who will always fall for a few pellets of grub in a rattled bucket, or some dry old toast, and be first out of the field.  The rest of the flock will nearly always follow.  Here you can see Naama (born 2014) trotting along in front, she is definitely the greediest. 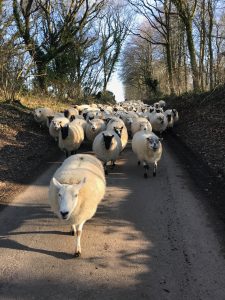 Calving has progressed well over the last month, we have only 12 out of 55 remaining to pop now.  One of the pre-calving jobs we had to do was a bit of hair-dressing.  We have to record the numbers of the cows as they calve, so we know which calf belongs to who, and some cows have, or had, very hairy ears, so out come the trimmers, and off comes the hair.  The ear tags are now very easy to read.  Another area that gets some attention is the tail, which if left untrimmed, inevitably collects some of what comes out the back end, and can make a bit of a mess of you as it swishes around, if the cow needs any help with calving. 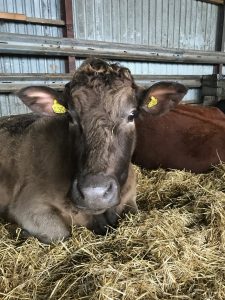 This cow had particularly hairy ears, now we can read her tag easily. 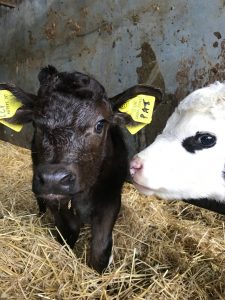 Two of the new crop of calves, one showing her new type of ear tag, which has an electronic chip in it, for easy identification with a magic wand, and it has space on which we can write the name of her father, so we know straight away not to put her in the same field as him if we keep her for breeding. 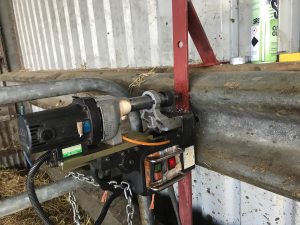 This is a very useful tool, a mag drill, which magnetises itself onto the metal which is about to have a hole drilled in it.  Here we were fixing brackets to the wall in the cow shed so as to be able to make individual pens for freshly calved cows. 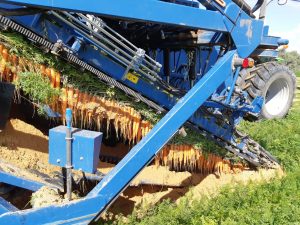 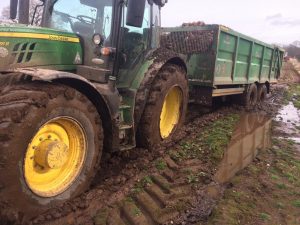 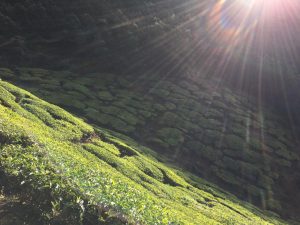 Our correspondent in India has sent this lovely picture from the highest tea estate in the world, and has also observed an interesting variant on cow husbandry in Agra. 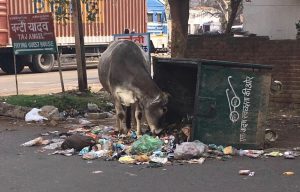 And we worry about urban foxes…..