You may recall that two months ago our large cattle were playing football with straw bales at Websley.  This got beyond a joke, so the great beasts were herded into a lorry a couple of weeks ago, and taken to Shaftesbury market, from where they moved on to someone with access to cheaper feed and stronger walls and gates, who will put the right finish on them rather more efficiently than we could.  The younger yearling cattle are strip grazing turnips above the village, mixing their diet with a few mouthfuls of tasty silage. 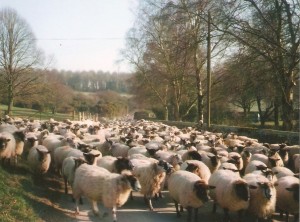 All the ewes have been seen by the tups now, who have all gone home for a well-earned rest…  The ewes are wintering on stubbles, with ad-lib supplies of hay.  In a normal year, most of them should be on turnips, or at least grass, but the dry autumn put paid to that, we barely have enough turnips for the fattening lambs.  We will be doing the first pick of lambs (well, hoggets really) this week, so hopefully we will be able to send on a decent load.  After New Year we are supposed to call last year’s lambs hoggets.  They will be going straight to Lloyd Maunder’s abattoir near Exeter.  They will not be enjoying the cold wind this week, as we’ve just had a visit from our shearers, who came to trim all their bottoms.

Hedge trimming is progressing well, our contractor Mark Stevens has smartened up much of the farm, though is waiting for drier weather to do the insides of the fields.  Most of our hedges are now trimmed every other year, which allows much more fruiting on the older growth, for birdfood.  We have around over 23 miles of hedge on the farm. 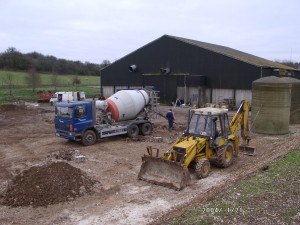 The foundations have now been poured for our new grainstore here at Travellers Rest.  With luck the building will begin to rise in a week or two, this is an exciting development, with great implications for making life easier at harvest.  There’s lots of work to do first though, concrete to lay, and grain conveyors to install, as well as the usual farming. 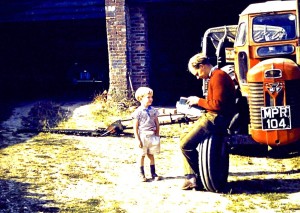 After watching the Trilith films last week, I find myself asking how much has actually changed, we use bigger machines, and no horses of course, but the principles behind rotations, fertility and good agricultural practice we ignore at our peril.  However I like to think that we blend in modern technology effectively, and pay more attention to marketing, in a world that is fiercely globally competitive, something of a contrast to the austerity of the war years.  The biggest difference when you think about it, is probably in the people.