Happy sheep grazing turnips, in spite of a biblical 20 inches of rain in the last 6 weeks.  It is remarkable how they manage to stay afloat in such conditions.  Half of our average annual rainfall has fallen within 6 weeks, giving us a 29 year monthly record for both December and January, and January isn’t over quite yet either.  Too many people have suffered from the incessant rain, and I only hope that those unlucky enough to have been flooded in our village have managed to get cleaned up and back to normal by now.  The cattle don’t seem to cope with the rain so well, their feet carry more pounds per square foot, and they create mud wherever they go.  We have had to move our outwintered youngstock into a chalkier drier field, where they do look much happier.  They’ll have to go back to the other field when things eventually dry up a bit. 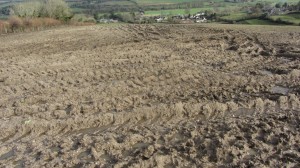 Visits to our local tractor dealers are often an excuse to run one’s eye over some shiny new kit, and this week was no exception; the John Deere shop always has a fine line up of green and yellow beauties out front, and at C & O tractors in Blandford  this week we found a brand new combine, 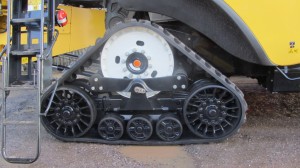 destined for a local farm, with a set of tracks on.  This is unusual for Dorset, as our ground is mostly free draining.  Tracks are very helpful on heavier clay land which takes much longer to dry out in a wet period.  The tracks spread the weight of the combine over a much larger surface area, so it does less damage to the ground, and can travel when conventional wheels would perhaps sink in, or get stuck.  Needless to say, the tracks add a considerable amount to the cost! 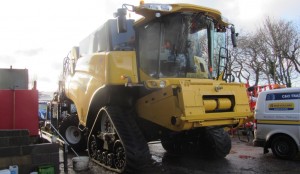 On this farm, a yellow combine would just not look right, there are strong allegiances to particular manufacturers, and having been green for getting on for 40 years, changing the colour of the combine would be a pretty drastic move.  We are quite jealous of the tracks, but not of the rest of the machine.  The different makes all have their attributes, one also has to bear in mind the backup service available from the manufacturer and the local dealer when considering the purchase of such an important piece of kit.  The last time we owned a combine which wasn’t green it looked like this, as driven by Roy Jeans sometime in the 1970s, a classic Allis Chalmers. 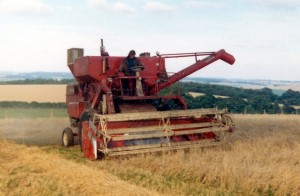 I am often perplexed by the sight of plastic bags hanging in hedges, and on fences, even on gateposts: 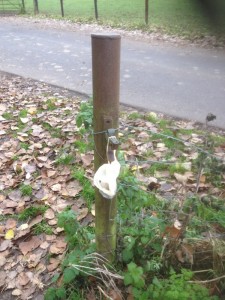 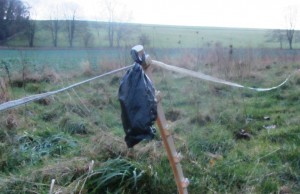 Eventually it dawned on me that people hang them there after filling them with dog muck.  Now why would this be?  Were they intending to retrieve it on their way home after their walk?  Well what silly old forgetful things they must be, and how many people must think the same way, because it is surprising how many times one sees this in the countryside.  Or is the answer rather more complicated?  In their confusion caused by parish councils and the letters pages in the local papers banging on and on about dog fouling, they are happy enough to pick up the mess in a bag, but is it a step too far to be expected to carry it anywhere?

“I know, I’ll just hang it here in the hedge, where it won’t get trodden on.”  But it might get splashed everywhere when the hedgetrimmer comes along, or perhaps the local farmer enjoys collecting this kind of thing, a bit like the used condoms found in gateways?

Please, please, please, when your dog makes a mess on a path where it might be trodden in, if you can’t face bagging it and taking it away, just nudge it under the hedge with your shoe, or a stick, where the bugs and birds can make use of it and nature will take its course.  Please don’t create an even worse environmental nightmare. 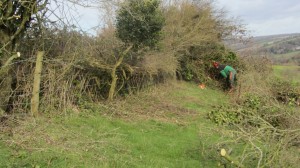 Our hedge restoration programme has continued this winter.  The process usually begins with the removal of the old fence, sometimes on both sides of the hedge, and this can involve a lot of hard graft, as shown in the picture, where the hedge has completely engulfed the fence, and old man’s beard, ivy and brambles have swarmed all over the hedgerow trees.  The aim is to restore the hedge to a line of healthy and vigorous native species such as hawthorn, blackthorn, dogwood, spindle, holly, vibernum etc.  A lot of old wood is cut down, and the younger most promising shoots are then laid, as close to the ground as possible, from where they will produce new growth in subsequent seasons. 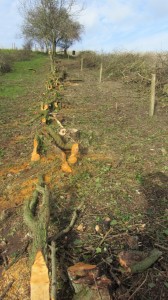 Any gaps between trees will be filled in with new plantings of whips, in treeguards, between now and the end of March, and a good stock and deer-proof fence will be erected along both sides.  Previous winters’ works are showing good progress in various parts of the farm, and usually, after 5 or 6 years, the hedge is once again thick and bushy, and a fine environment for birds, insects and small mammals to thrive in.  A network of healthy hedges acts as a system of corridors for wildlife to move around the countryside between different areas of woodland and downland.  On the arable land, where we have established 6m grass and wildlife margins around many fields, the corridor effect is magnified, with the hedge as a magnet, or refuge, in the middle. 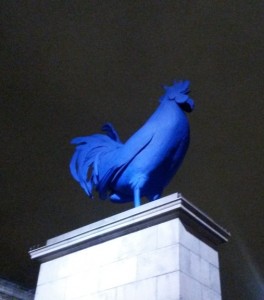 A short update from the poultry department:  the strikingly bright fellow shown here was spotted recently, beyond the Dorset border I must admit, I wonder if anyone can identify him?