There is something about cattle, their lumbering good humour and inquisitive sense of mischief, which makes them very entertaining and likeable for most of the time (except of course when you are trying to get them to do something they don’t want to do).  Our heifers, who are now in the yard at Websley, whilst the ground outside is at its wettest, are currently being fed on some good hay which we managed to make last summer, and they are being entertained by a young and handsome Aberdeen Angus bull, whose attentions will hopefully result in a clutch of newborn calves around November time.  Soon after he arrived, on snowy Thursday, he was seen to be keenly performing his duty, but had unfortunately failed to check first the limitations of his surroundings; the yard is surrounded by an undercroft, where the cattle can lie in comfort on dry straw, and in the heat of passion, he whacked his head on the ceiling timbers above, giving the whole place a bit of a tremble. 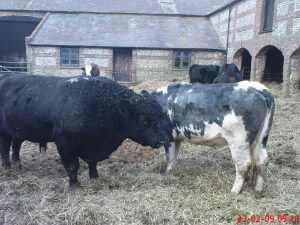 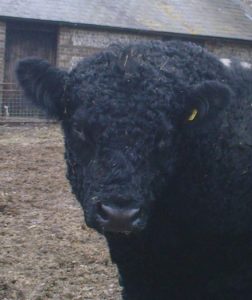 We have also been entertained by our pet rabbit, who has taken to laying eggs.  I had noticed a hen on top of the rabbit’s house on several occasions, looking like she wanted to get to know the rabbit better, and had assumed that she simply wanted to clear up the mash that the rabbit had carelessly split on the floor after we put her out in her run.  However a couple of days ago I discovered in the hay-filled downstairs bedroom, a nice little nest containing 10 eggs, which the rabbit had managed not to break.  One wonders whether, if left, the rabbit would have hatched them out herself, or if she would have endured the hen staying in there full time to incubate them for the next three weeks.

The snow gave a lot of people a real chance for a bit of fun, for the first time in many years there was enough to do some real tobogganing.  It was probably more snow than anyone under the age of 20 had seen at home before.  In all honesty it would have been quite fun to have had a little more, because there wasn’t really enough on the road to justify going out with the snowplough around here.  If one is too eager to hitch on and roar out on the biggest tractor, with flashing lights blazing, it is all too easy to make things worse by compacting the snow into a lethal ice layer, unless the snow is so deep that vehicles physically can’t get through it.  It is amazing to be reminded that in the infamous winter of 1963, the lane from Durweston up to Travellers Rest was blocked with snow for six weeks.  These days I like to think that we would dig it out with forklift and JCB digger.  I did use the forklift to clear slush off the road a couple of times, early enough in the day for it to dry off before nightfall, but it wasn’t real snowploughing. 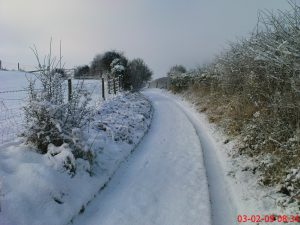 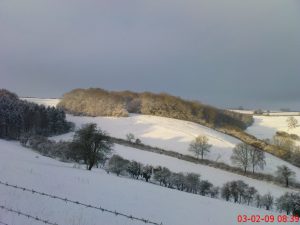 This week the snow is a distant memory, and we have managed to start sowing some spring beans, on some of the lighter soil.  A little winter sun would be a great help, if anyone is listening!