If anyone knows an easy, legal way of dispatching large numbers of pigeons please let me know.  The grey feathery menace is chewing our winter rape into the ground, hence the loud bangs every 30 minutes up in Great Ground, apologies for the noise, but now that the rape has had all its fertiliser, it should grow away if we can just keep the blasted things off for a couple of weeks. 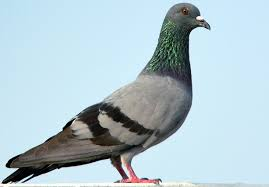 Funnily enough, it was only a couple of weeks ago that a bunch of farmers convened at the Langton Arms, (still in action despite being badly burned a couple of weeks earlier), to brush up on looking after farmland birds.  I have to admit that pigeon welfare was not on the agenda, but we were keen to learn how to encourage lapwings, skylarks, grey partridge, even stone curlew, and many other birds.  Many tips were given by speakers from the RSPB and the Game Conservancy Trust, the most important things to provide are nesting habitat, adult food sources, and most importantly and most difficult, chick food sources. 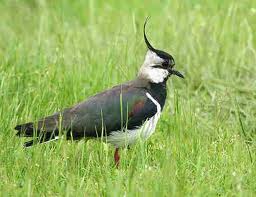 Modern agriculture has been moulded by government and European policies for the last 50 years, whereby if we wish to benefit from subsidies, we must grow crops to claim them.  Sensible enough, we shouldn’t expect something for nothing, the trouble is that it has got us into a position of producing food at less than the actual cost of production, and in the mean time, if we wanted to grow some wild bird food crops for example, not only did we forego the profit from growing the crop, but the subsidy as well, a bit of a double whammy.  Fortunately, this should all be about to change, as a new regime is to begin next January, under which we should have more freedom in what we grow.  Fingers crossed that Defra don’t screw it all up with daft small print which has caused so much trouble in the past.

Some consternation has been caused in the village, for which I must apologise for not mentioning earlier.  We have recently coppiced a hedge on the brow of the hill next toMilton Lane, this is done on the advice of the people who run the South Wessex Downs Environmentally Sensitive Area Scheme.  The hedge, which had become more a gappy row of old thorn trees, 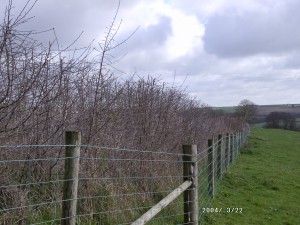 was gradually falling over and disappearing.  Now it has been coppiced, and gapped up with new plants, it will be fenced in, and allowed to grow up again from the old stumps, and within five years, will look much more like a proper hedge again, and will provide much better habitat for birds and small mammals than before.  The photo shows part of another hedge that was coppiced about three years ago. 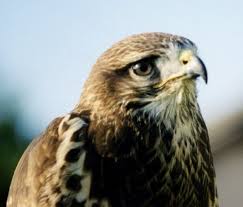 One more note on birdlife, whilst cultivating on Shillingstone Hill a few weeks ago, Norman reported seeing sixteen buzzards following the cultivator for worms.  This started me wondering what the collective noun for buzzards is.  Any suggestions, please send in for next month.  In fact, why not try the quiz on page ??

Lastly, birdlife on a far more local scale, in action this week at home: 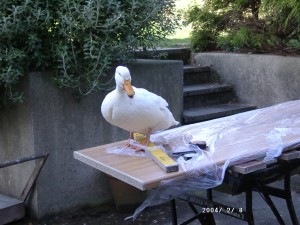