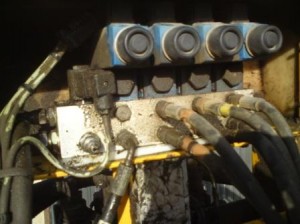 This month’s baffling technical picture was one of our winter time maintenance tasks.  It shows an oil manifold, where electrical solenoids (above) control the flow of oil to different parts of our sprayer, operating rams that fold and unfold the booms, and raise, lower and tilt the boom, so that spray is applied to the crop from the right height.  This manifold had been slowly leaking oil for several busy months, and we felt it was time to investigate.  It turns out that there was a slow seep of oil through the aluminium body of the manifold, which was only visible when the tractor was pumping oil through the pipework.  When at rest there was no clue where the leak was, but under pressure it wept though the flat surface of the metal, through what must have been a microscopic crack.  Several phone calls, several days, and £300 later, we had a new manifold.  Now came the fun, disconnecting all the pipes and wires, after carefully marking them, replacing a bucketful of small rubber washers, and then reassembling it all.  Fortunately, all was done correctly, and the machine is now working happily again, with no oil leak. 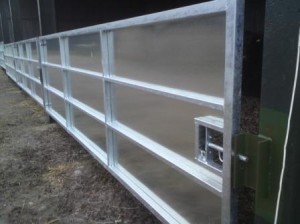 Calving time approaches, and last week we took delivery of some new gates for the haybarn at Shepherds Corner, where the cows are to live for the final stages of pregnancy, and where they can be more easily kept an eye on, in case of difficulties.  An old friend came along to weld on some hinges for the gates, and now the shed looks pretty smart, and ready for occupation. 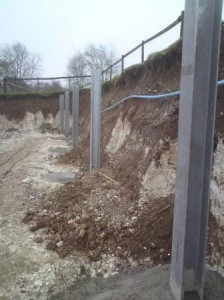 Elsewhere on the farm we have been indulging in larger scale engineering, erecting a retaining wall at Travellers Rest, to hold up the soil bank where we excavated for the new tractor shed which we hope will be in place before harvest.  This has required the digging of holes in the ground to lay a concrete foundation, into which a base plate is set to bolt steel pillars to, then more concrete on top to hold it all in place.  Once the concrete is set firm, we can insert the heavy concrete panels shown in the picture into the steels, and then backfill the gap behind with chalk spoil from the holes.  The wall will be around 3 metres high, which, with a perforated drain pipe laid along the bottom behind, we hope will hold up the soil for many years! 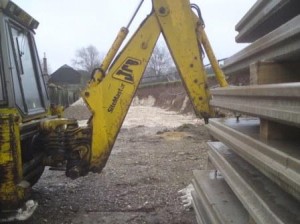 In what now seems to have been a very busy beginning to the year, we have also been fencing.  Down in the Glebe, some may have noticed that we have coppiced off a rather threadbare and overgrown hedge over the last two winters.  After an intense period of nettle control in the hedgeline last summer, we are now erecting a new guard fence on both sides of the hedge, which will protect the newly gapped-up hedge from marauding deer and sheep, and will give it a chance to re-establish itself, hopefully with a good vigorous and thick base.  Gapping-up is the planting of new hedge plants in the gaps between old mocks, so we once again have a continuous corridor of vegetation, which should benefit many types of wildlife.  The speed and efficiency of our fencing has benefited from some lessons from a friend who is a fencing contractor.  He and his gang have helped us get on top of the new field project in the Sutcombe valley, where around 900 metres of new fence have been erected around a new field formed by grassing down a few acres of Wynchard, to bring a very steep and inaccessible bank back into properly stocked management, as well as some scrub clearance in the bottom of Sutcombe wood to create an area of woodland pasture up the valley which leads to Foxwarren and on towards Folly. 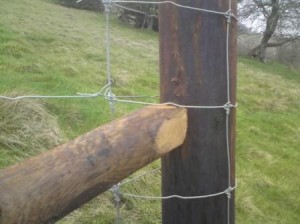 Various new fencing techniques have been learnt, from the strutting of straining posts to straining technique, no longer requiring a tractor to strain up the wire, but using a pair of straining tools, and then using heavy duty crimps to fix the wire together.  This all allows us to strain up longer lengths of wire at a time, and more tightly, as we are now using high tensile wire, which should be longer lasting.  I could now go off on one about the declining quality of fence posts over the last 20 years, posts are rotting off which have only been in the ground for 10-15 years, but I really would then be turning into a boring fencing nerd.  So until next time……..