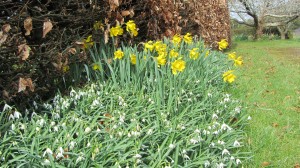 A couple of weeks of frost has done no end of good, for a start it is a break from rain, secondly it kills off some unwanted weeds in our winter crops, and thirdly it slows down and can even kill off bugs and diseases in the crops.  The local flora hardly knows whether it is coming or going, I can’t remember such a big overlap between the snowdrops and the daffodils.  The snowdrops have been beautiful, and have lasted for weeks.  The first daffies appeared in the middle of January, which is frankly ridiculous, and we are just about at peak flowering now, in the second week of March, way earlier than normal.  They seem to have ignored the frost and flower buds have continued to open daily regardless. 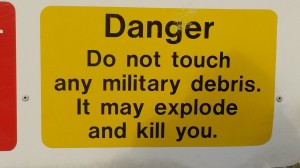 During half term we took a trip to Northumberland to visit sheep farmer friends near the Scottish border, we found snow on the ground, beautiful cold sunny days, cows calving in the barn, and our friends working as hard as ever to earn a living from the harsh hills, which are part of the Otterburn military ranges.  One can often find pieces of expended military equipment such as flares, lost uniform, or worse, scattered across the hills.  One day we visited the local quad bike shop, the most essential piece of equipment on the farm, we found they had a heap of 32 brand new bikes still in their crates.  I was assured that all would have been sold by lambing time (april).  They also have a good supply of second hand machines. 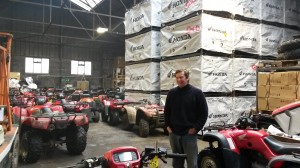 On our last day we went with our friends to Hexham market, one of the biggest in the country, where they were selling off two heifers, and some cull sheep. It turned out to be a good day at the market, there were plenty of buyers, and prices were good.  My picture shows one of the Blackface cull tups they were selling.  Cull loosely means ‘retired’, they could be bought by another farmer for further breeding, on a less harsh lowland farm, or by a butcher if they are carrying enough meat. 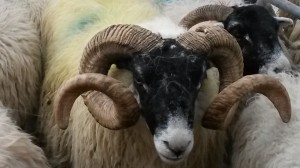 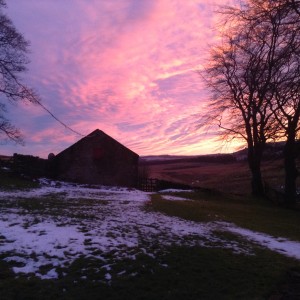 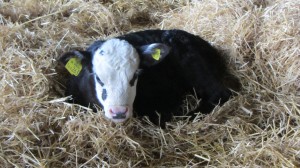 Back in Dorset, our cows started calving a couple of weeks ago.  We have now had 10 of them produce their bouncy little offspring.  On Saturday evening one of them decided to start calving just after midnight.  My brother has just returned from a congenial evening with friends, he popped in to check the cows, found a pair of feet sticking  out of one of the cows, so decided to go and have a bath in the hope that the calf would have popped out by the time he came out again.  Sadly this was not to be, it took him till nearly 3am to pull the little devil out using ropes and a calving jack.  He is HUGE.  Another bath was required before bed…….. 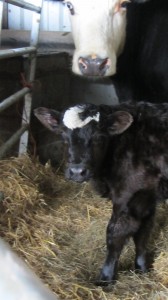 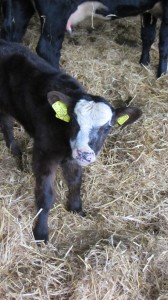 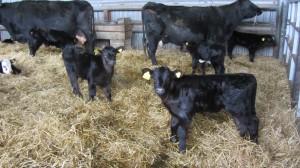 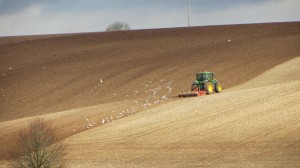 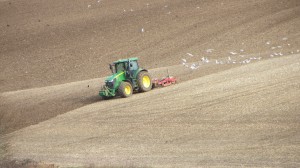 Last week the muck spreading men were busy, several hundred tons of chicken muck have arrived, and most has been spread and worked in now.  Today Gary has started preparing seedbeds, and shortly we will be sowing spring barley.  This year we are growing a variety called Propino, which is popular with many brewers, especially for lagers and light bitters.  Much of the Propino grown by farmers along the south coast will be shipped across the channel from our southern ports, to the maltsters and brewers of Belgium and Germany, where it will be turned into delicious European beers. 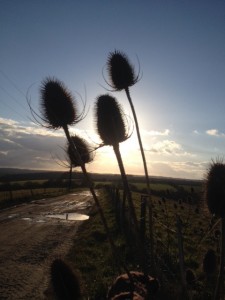 Markets for all grains are currently depressed, prices are lower than they have been for several years, due to several good world harvests on the trot leading to a glut of grains around the world.  This makes marketing our crops very tricky, prices have been falling steadily for the last two years, prices have fallen nearly 40% in that time, it is unrewarding repeatedly selling for less than we were being paid a month earlier.