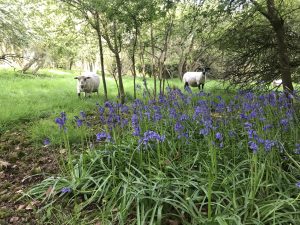 As the bluebell season draws to a close this pretty patch still exudes a beautiful rich blue, and has so far evaded being eaten by greedy sheep.  Sheep have been forefront in the mind lately, they were shorn over the bank holiday weekend, as strangely seems to happen too often, and then all too quickly started lambing.  We lamb late to try to catch favourable weather, as the ewes lamb outdoors, and we try to time shearing as late as we dare, but not so early that the sheep will get too cold. 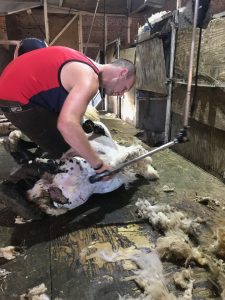 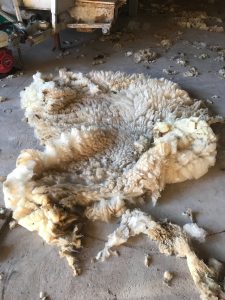 Once the wool is off, the ewes are much happier, the lamb load always generates extra heat, so as soon as the sun comes out they really don’t need that huge fleece.  Removing the wool early means it is easier to see what is happening at the rear end when lambing starts, and also helps to deter flies from laying eggs which develop into maggots, which are a horrible affliction.  If you have listened to announcements from Natural England recently you might think it could soon become illegal to control such pests as rats, mice and even flies.  The revocation of licences for the control of birds such as crows, magpies and pigeons has been an utter shambles.  If anyone needs any reminding of why crows in particular need controlling, it is here. 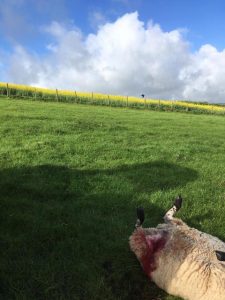 The picture shows a heavily in-lamb ewe who had got stuck on her back, and was attacked by crows, so badly that they got through to her womb and pulled a lamb’s tail from the wound.  The ewe died before we could despatch her humanely.  How much pain was inflicted before we found her one cannot imagine.  Quick thinking by one of farm team resulted in this picture, which shows the ewe and one of the gang of four crows that attacked her.

Crows and magpies will also attack new born lambs. Many of our crops are plagued by pigeons and rooks when emerging, or just before harvest.  The corvids (magpies and crows) also take birds eggs and fledglings from hedgerow and songbirds, as well as pheasant poults, especially the ones hatched and reared in the wild.

We use a variety of non-lethal bird deterrents at different times of year, including bangers, both gas and rope, scarecrows, whirlygigs, plastic bags/flags, cut-outs of birds of prey on long poles etc.  None of these work particularly well, the growing populations of certain species need proper control with traps or guns.

Natural England could have put their hand up and admitted there was a problem, and asked all parties to bear with them while they prepared something legal which would enable us to carry on largely as we have done for a great many years.  Instead they left it wide open for mischief makers like Chris Packham to exploit the situation and stir up what they knew would be a hornet’s nest. 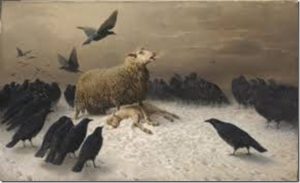 We clearly need to train our sheep to become more assertive

Over the Easter weekend we hosted a university reunion for around 60 people.  The fabulous weather provided the perfect backdrop for a farm walk when the cowslips were at their best. 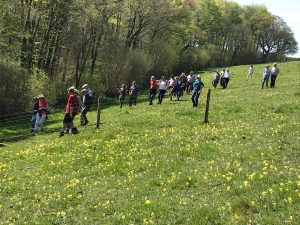 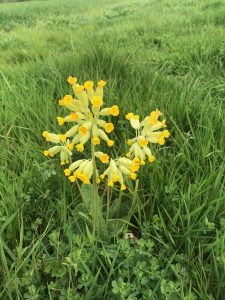 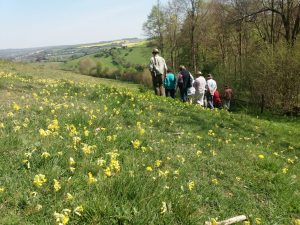 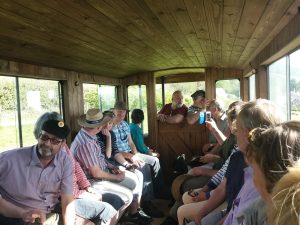 Over the next few weeks we will be welcoming the Durweston Cameo club, the North Dorset CPRE and a number of schools for visits on the farm, let’s hope the sun shines on all of them! 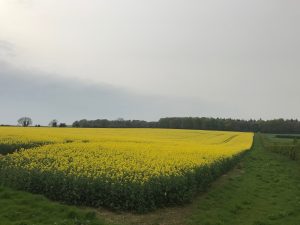 Readers may recall my reports of very disappointing oilseed rape crops due to attack by flea beetles and their larvae.  The bright yellow flowers disguise the unevenness in the crop, and the shortness and distortion of many plants.  We will have to wait and see at harvest time what the end result will be, in the mean time we have to decide how much OSR to grow next year.  Was this a perfect storm of conditions which favoured the beetle and did for the rape?  Is it a one off, or are we seeing a sign of what OSR growing without insecticides will be like in the future, in which case will we have to reduce our exposure to it ? 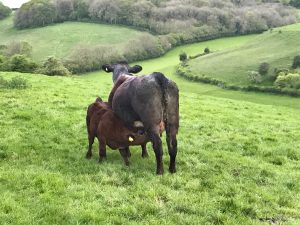 Our bulls were re-introduced to the cows in the first week of May, to ensure a prompt start to calving at the end of next February, even though there are still 3 who have not yet produced this year’s offspring.  It requires a bit of concentration to keep the calving interval to a year or less, late calvers have to be removed from the herd, or else they will tend to get later and later.  The bulls need to be taken away promptly once all cows have had sufficient time to cycle twice or a maximum of three times.  Any that do not conceive in that time will have to stay empty until next year, and if more than five years old are likely to be sold.  As old cows are retired, (some of our oldest have now given us 11 calves), we need to bring new breeding stock into the herd, so we choose the best behaved and most well grown heifers from amongst our youngstock to keep.  For the last three years we have put our young replacements through a programme at this time of year, to synchronise oestrus, and then to have them served by AI (artificial insemination, not intelligence).  There are two reasons we do this, firstly, the heifers are the offspring of one or other of our two bulls, so we have to ensure they are not mated by someone too closely related to them.  And secondly, we reserve our best pasture, on the river meadows, for our youngstock, they grow better there than they would on the slopes higher up the farm where the cows are grazing with the bulls and this year’s calves.  Serving them by AI means that once served they can go back with their brothers and sisters on the meadows, for the rest of the summer, and continue to grow well, before the developing calf takes too much nutrition from them.

Heifers waiting for the Vet

The process requires a visit from the vet to insert CIDR (controlled internal drug release) wands into the heifers, these deliver progesterone, which brings the animals to the same point in their oestrus cycle.  One week later they are injected with a dose of estrumate (a synthetic prostaglandin) to stimulate the shedding of an egg.  Once the inserts are removed, one day after the estrumate, AI should follow 54 hours later.  A man in a van with a supply of suitable equipment, including semen straws from selected bulls, and arm length gloves, will visit on Monday afternoon.  3 weeks later we will be on the look-out for ‘bulling’ behaviour, meaning the animal is cycling, and the AI did not work.  A second attempt can be made within 18 hours or so, and if this fails again we have to decide whether to give up, or to present the animal for a real life experience with the bull who is not her father.  Good record keeping should enable this to be possible. A fascinating fact to add here:  The average duration of standing heat is 15 to 18 hours, but heat duration may vary from 8 to 30 hours among cows. An oestrous cow usually stands to be mounted 20 to 55 times during her oestrous period. Each mount lasts three to seven seconds.

Possibly not all with the same bull. 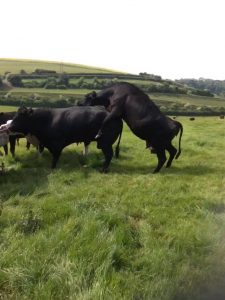 The cows and calves from the valley field managed to escape through a gate left open by person unknown, one Sunday evening recently.  We were alerted by our school neighbour to say that they were grazing on the sports field. We had to act quickly before the running track was ruined, a little manure may have been spread, but fingers crossed there was no serious damage. 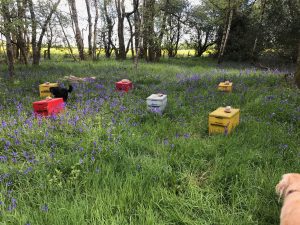 Our beekeeper friend Robert Hogben has been in with extra hives whilst the rape is flowering, as he always does at this time of year.  What is new however are these polystyrene insulated beehives, which I have not seen before.  The bees seem perfectly happy and I suspect have survived the cold of winter rather better than they would have in the more traditional wooden hives. The coldish weather during flowering will not have encouraged nectar flow as well as it would had it been warmer, but the bees were out working on the day I visited them. 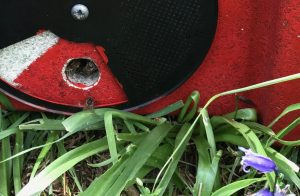 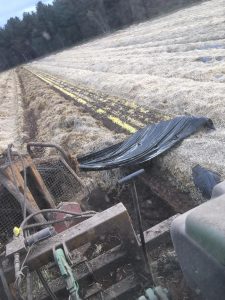 Our reporter in the carrot fields of Nottinghamshire has been busy uncovering the carrot beds.  The carrots remain in the soil over winter, covered by a sheet of plastic with a good coat of straw on top, to prevent them from freezing. Once orders are received from the supermarkets, the staff set to and remove the straw and plastic, and lift the carrots, hoping the soil is not too wet, then haul them off to be loaded into lorries, and thence to a washing and bagging plant, from where they are sent direct to the shops.  There is video here: 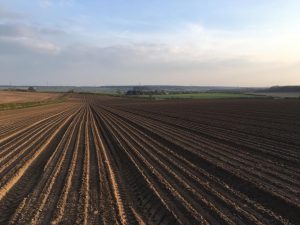 Elsewhere on the same farm, onions have been planted in immaculate beds. 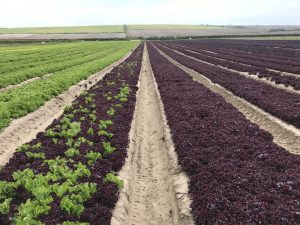 Nearer to home, near Owermoigne, the salad leaf season is well under way, three crops per year can be grown if the right kind of soil and a plentiful supply of water can be found together.  At this location, also at Tincleton and Bere Regis, The Watercress Company grow many acres of leaves, once harvested they take them to their bagging plant at Waddock Cross.  Irrigation is essential for such sensitive crops, and only a single cut can be taken, because apparently we customers don’t like our salad leaves to have too many straight edges. Once cut, the remains are ploughed in and another crop planted. 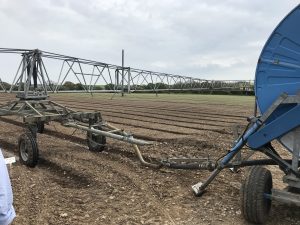 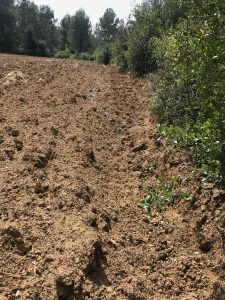 A recent trip to Catalonia, whilst interesting and relaxing, inadvertently reminded me why we no longer use the plough on our own farm.  We found plenty of land like this picture, badly ploughed, too deep, too close to the hedge, risking damaging hedge roots, and leaving little space for wildlife to occupy  between fields.  Leaving the soil like this in the sunshine bakes the clods into solid lumps.  Bad ploughing soaks up more power by going deeper than necessary, therefore wasting fuel, it also needs more work to bash the clods into small pieces to make a seedbed than if it had been done with more care, and with more suitable machines.  I was also reassured that their rape crops looked little better than ours. 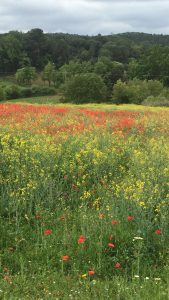 Lest anyone wishes to accuse this author of smugness, here is a recent picture of our worst field of rape.  Oops. 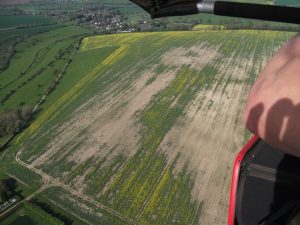 And just for fun here is the same field in 2012, it was supposed to be white poppies, not red. 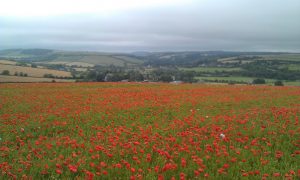 The rent such fields pay not.