Life would be very dull in a long winter if we didn’t have a few animals about to keep us entertained and occupied.  We wouldn’t want to be like those fat lazy and boring eastern counties arable farmers now would we?  They only have to work for three months, and spend the rest of the year in the pub.  I remind myself of this when I am out in the field in the pouring rain, when the lambs have broken through the electric fence at one end, and the cattle have broken out at the other.  Which ones should I get in first?   Or should I go back to the farm for a freshly charged fence battery to replace the flat one, which is the reason why they got out in the first place.

The animals have no sense at all, if they were left to their own devices they would starve in no time.  The cattle are so stupid that when we move the electric fence, allowing them access to a narrow strip of tasty turnips, they will start eating them keenly, but at the same time will walk all over the turnips, rather than stand still and eat what they can reach before moving on, they will tread them into the mud, and then will crap on them for good measure, just to make sure they can’t be eaten.  Then by the end of the day they are blaring again for more.  When our forebears bred domesticated animals, they were mainly focusing on meat or milk production,  and good mothering ability.  Brains didn’t much come into it, though I suppose if they did have any brains, they would soon learn how to switch off a fencer, and how to open gates.  As it is, a 500kg bovine beast is surprisingly easy to contain behind a tiny bit of wire carrying a belt of 3000 volts.  It doesn’t take terribly long to train them.  We used a length of electric fence to keep the cows and calves out of the way last week, while we mucked out their yard.  We didn’t bother to put a fencer on it though, as the cows know exactly what’s involved.  The calves however, who haven’t yet experienced real electric fence, chewed it, walked under it, over it, broke it and trod it into the mud.  What a shock they will get when they meet a real electric fence later in the year.

The lambs show quite different bevaviour around electric fences.  Cattle will escape through a fence when the battery is flat by simply pushing further and further forward, whilst munching at ground level, and will suddenly find they are the wrong side of the fence.  They will then wander up and down (treading more food into the mud) wondering how to get back with their mates on the other side.  With lambs, their fence is not moved daily, they have smaller feet, and do less treading damage, so we can give them a larger area to feed on, which will last 10 days or so, unless the weather is very wet.  When lambs stage a breakout, it is more often a team event, usually there will be a large group on the wrong side, but they still make out they are terrified of the fence even if it is flat on the ground, and it is hard to persuade them to jump over it.  Once they do start to move back, there will be a sudden charge, involving hundreds of pointy feet, and invariably the fence gets broken in several more places than before.  You then have to trudge back to the reels, loosen some wire on each of the 3 reels, walk back and try to find the broken ends, which have been dragged way out over the field, where the wire snags on stones and stalks, and twist them up together, rethread the wire through the posts, and finally go back to retighten the whole lot at the reels. 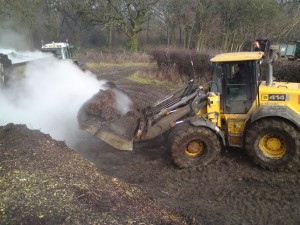 The late start to spring that we are experiencing means that we have not yet started any land work, as it has been either too cold or too wet so far.  We did manage to get some muck spreading done last week though, and the first heap was certainly very warm in the middle, you can see the steam in the photos.  The rain immediately after spreading helped prevent any smell, but has held us up from cultivating the muck into the soil. 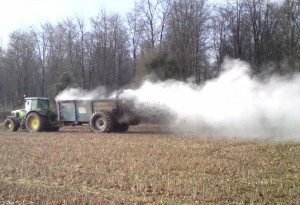