Dougal and his shiny steed sowing wheat at Thornicombe

With a huge sigh of relief we finished wheat sowing today, (10th October) after a rip-roaring week.  The weather came right last week and with several early starts and late finishes we managed to sow 215 ha in 6 days, approx 35 ha (nearly 90 acres) per day.  The machines behaved themselves, and the soil has been in great condition with good drying winds and fine days for a whole week (except Saturday), so the roller has been well up behind the drill, pushing stones down, and leaving a fine flat firm seedbed, just like we were taught at college.

Gary working down the land in front of the drill 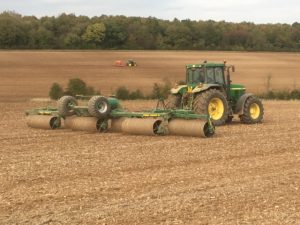 Brendan rolling behind the drill

We have sown 200 ha of winter wheat and 60 ha of Maris Otter barley in total, to add to the 140 ha of rape we sowed in early September, and another 25ha we had to sow for the second time 2 weeks later after the slugs and flea beetles had done their best to scupper our plans for next harvest.  Several bags of slug pellets and a dose of cypermethrin have given the remaining plants a chance, but we are keeping a very close eye on the redrills, which are still at the very vulnerable cotyledon stage.  If the slugs and others get their way it can end up completely gone, or else like this, where the turnips on the hill have suffered some grazing.  The latest pest we have to beware of is the turnip sawfly, which 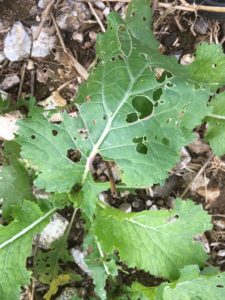 lays eggs on the leaves, these hatch and rapidly grow into greedy black caterpillars, and can reduce brassicas to skeletons if not dealt with.

Once the plants have got past these hazards there are diseases to negotiate, such as Phoma, which if left unchecked can turn into stem canker.  The fungus grows filaments through the plant, from the leaf where the phoma begins, and if not sprayed it eventually gets to the stem where it will form a canker, and kill off the upper plant in the spring.  Phoma appears as light brown blotches on the leaves with tiny black dots (picnidia) on them, and already these can be found on the newly established rape crops, which is earlier than in most years.

One would think that the plant breeders are breeding disease resistance into the modern varieties, however they will tell you that they are working so hard breeding varieties that give high yield, better oil quality, early maturity, and good standing ability as well as disease resistance, and that it is always a matter of balance getting the 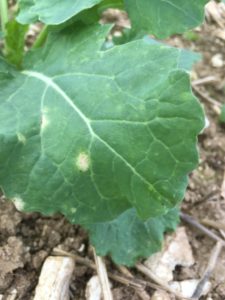 The beginnings of a Phoma outbreak on rape leaf

best mix of all of these.  We should remember that traditional breeding techniques are very long winded, and take many years of patient work to come up with new improved varieties.  Some breeders will tell you that they need to be allowed to use GM techniques to do this faster, which are still not allowed in Europe.

In many other parts of the world GM crops are very widely used.  A cynical person would point to the most common GM crops, such as roundup resistant corn (maize) or soya as doing little to reduce chemical applications, all it does is allow glyphosate (roundup) to be used on the growing crop, which is cheap, and saves the need to apply other weed killers which are more expensive.  In my opinion this technique will only speed the development of weeds which are resistant to Glyphosate, which would be a disaster.  (See last month for more on Glyphosate). 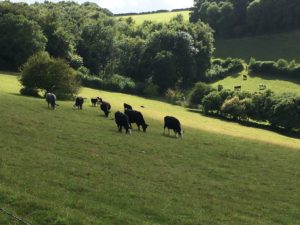 Is it more environmentally friendly to purchase and consume meat, or GM Soya?  They could be seen as directly comparable.  The likes of George Monbiot, in the pages of the Guardian, are exhorting us to abandon meat and eat more soya, they tell us that farm animals are destroying the environment and causing global warming with their constant farting and belching due to their grass diet.  Mr Monbiot believes the grass downlands, meadows and uplands should be rewilded, which means leaving them to grow thistles, ragwort, nettles and brambles for the next 100 years, until eventually they return to mature woodland.  Grass fed beef and lamb from farmland which cannot be cultivated due to being too steep wet or stony, is a very efficient way to produce protein for the human diet, we humans cannot digest grass, so this makes sense to me.  We might just need to regulate how much meat we eat as part of a healthy balanced diet.  Moderation in all things as Grandma used to say.

I wonder how easy it is for vegetarians to find out whether the soya products they consume come from GM free sources.  We cannot grow Soya in northern Europe, so it is quite hard to be certain of its provenance.  It is largely grown in tropical and sub-tropical areas, and we are told is often grown on land freshly carved out from rainforest. 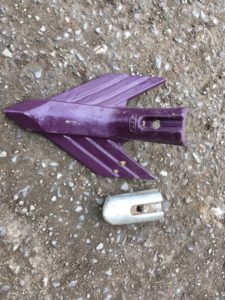 Talking of stony land, some of our stonier fields are quite punishing on our machinery, rubber tyres, and metal soil engaging machines can suffer badly.  This picture shows a brand new point for Gary’s cultivator, next to a worn out one, which had only been fitted that morning, 27 hectares earlier.  The purple paint is a new branding development, the paint does not stay attached for very long at all. 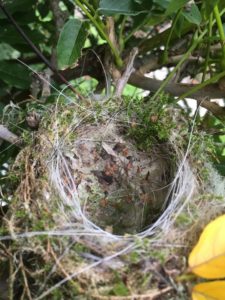 Here is a lovely nest I found while trimming the Wisteria on the side of our house.  Can anyone tell me what kind of bird might build a beauty like this?

A couple of weeks ago I went to Sturminster Newton Mill one Saturday morning, when the mill was operating. The visit had been set up by a friend in Pimperne who every year takes a bag of grain for grinding into flour, and then for baking into bread to help celebrate harvest festival in Pimperne church.  We usually get some of the flour back to use ourselves, in home baked bread for the next few months.  It has not been a particularly good year for milling wheat, and our farm is generally not fertile enough for the best quality, so it helps to blend the flour with some bought strong flour, to ensure that the dough rises.  A benefit from stone grinding is that it is a more gentle process than the high speed high output modern mills, and it is said to preserve the beneficial enzymes and proteins in the grain because the flour does not heat up much in the slow and steady, water driven, grinding process. I must admit, it looked painfully slow, taking more than an hour to grind just 20 kg of wheat. 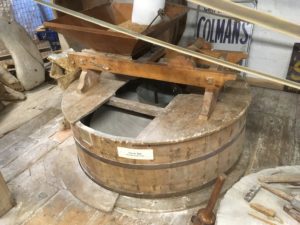 The partially enclosed grinding stones upstairs in the mill