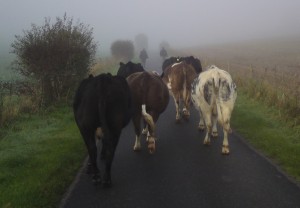 Great excitement last week, our first home born calf arrived.  We brought the broadest of the ladies up to Shepherds Corner a couple of weeks ago, so they are easier to keep an eye on as they near calving, and nearer to the buildings if they need to be brought inside at short notice.  Being heifers, they are first-timers, and have as little experience of calving as we do, so if they need a hand during the difficult bit, we may need to tie them to something immoveable, like a barn.  The first calf was born to a very clever mother, who popped her out in the middle of the night, and got her feeding well by morning. 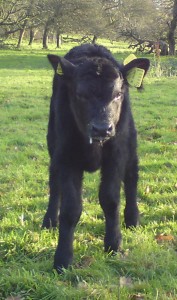 The second heifer announced her intentions early on Sunday morning, and when there was still little to show for it by after lunch, the vet was called.  He showed us how to use the calving machine, which is a bit like a sideways on car jack, which pulls instead of pushes, and in no time at all we were the proud owners of a bull calf.  As it turned out, the calf was coming the right way round after all, and mother would probably have pushed him out ok in her own time.  Human intervention can sometimes cause unnecessary complications, but it always helps to have a bit of experience in these things, and in the future we will try to be more patient. It wasn’t really very different to lambing a sheep, except by being a lot bigger,(and potentially messier).  So maybe we will be brave enough to do it on our own next time.

The next job is to adorn the poor calf’s ears with those attractive bits of jewellery you can see in the picture.  It is a legal requirement to register the calf’s birth, and put an ear tag in each ear within a week of birth.  This means doing it the day after birth, because otherwise you’ll never catch the little beggar, they learn to run very quickly, and there is always the chance that mum will get a little tetchy about her baby being interfered with. 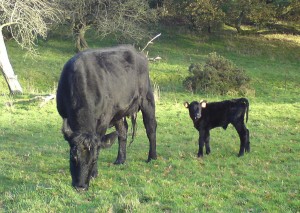 It is a two man job to do this, one to hold the calf and juggle tags, pliers and ears, trying not to end up with the tag implanted in your coat, and the other person has to ward off the worried cow.  Now we would much rather not have to do this at all at this stage, because disturbing the mother-calf relationship is not clever this early on, however if the calf is not registered and tagged in line with regulations, it is deemed a non-citizen, and cannot be kept, sold or bred from, and would have to be destroyed.  The rules were created after the horror of the BSE episode many years ago, when it was decided that full traceability of all cattle was essential.  In order to do this, a monstrous bureaucracy was created called the British Cattle Movement Service.  Every animal has a passport, which goes with it from farm to farm throughout its life, hence the importance of the ear tags too, the numbers on which must tally up with the passport.  This may all be a bit of a pain, however it does mean that every animal’s history can be traced right back to birth, and beyond, and that british beef can be eaten with complete confidence. 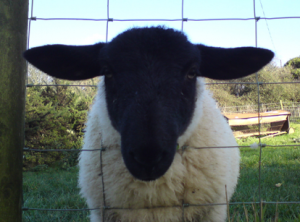 This picture shows the attractive and intelligent face of one of the orphan lambs we reared back in the summer.  They never let anyone pass their paddock without reminding them that they want their breakfast, again and again, all day long.  This one is called Cheeky, and some readers may remember meeting her on open Farm Sunday in June.  Here she is showing that a mere fence is not going to stop her showing her devotion to her fans.

During half term, we went north, and spent a few days with friends on their sheep farm in Northumberland.  They have so many sheep that they need seven sheep dogs, all of whom, as well as being very hard working, and mad about sheep, are very friendly and well behaved, we were entrusted to take them for long walks on the hills and dales, and they don’t mind getting their feet wet either. 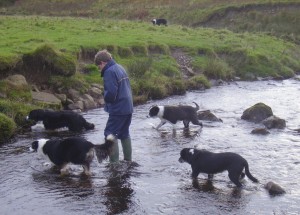 Our friends had recently been to various ram sales across the north of England, and to some of the wilder outposts of Scotland too, in search of the best bloodlines with which to improve their sheep.  These fellows, complete with their impressive headgear, were starting to fight each other, as there was a lot of pheromone in the air, and they were keen to get to work. 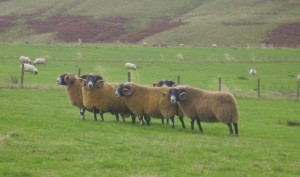 Sheep farming in that area is quite different to down here in the soft south.  For one thing there is very little fencing.  The ewes are ‘hefted’ onto their hills, which means that they will always live on the same part of the farm, without being fenced in.  The hefted flocks would have originally been taught to stay in the right areas by shepherds and dogs, and once the habit is established, it is passed down from mother to offspring over the generations.  The foot and mouth outbreak in 2001 messed up a lot of this, and where whole flocks were taken out, it is very unlikely that the farmers would be able to re-establish hefted flocks, because shepherds are rather more expensive than fences these days.