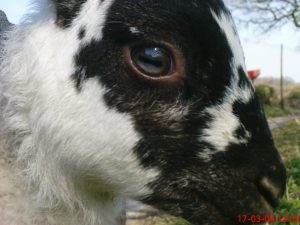 Spring is in the air, which is probably guaranteed to make it rainy/ windy/cold again, but the lovely weather has enabled us to get on with loads of outdoor work.  Most of the spring sowing is now done, 65 hectares of beans, 120 ha spring barley, 40 ha peas, and 20 ha of poppies to date, all rolled down into good quality seedbeds.  The barley is just poking through now, and the fields have that lovely pale green tinge to them.  We just have three fields left to sow, the two poppy fields are waiting for wessex water to complete deliveries of sludge, before it can be spread, worked in and sown, and the last barley field is waiting for the ewes to finish off the turnips before we can get on with the cultivations there.

We were expecting to grow borage again this year, but unfortunately the market is awash with borage oil, so no new crop is required by the buyer.  We had a bit of a panic last month when we found this out, and had to do a lot of research to decide what would be best to grow instead.  We have plumped for peas for several reasons, firstly the forward price is good, secondly, the field is pretty flat and one of our most suitable for peas, and thirdly, it is so long since we last grew peas, that we have forgotten how annoying they are to harvest!

Our new seed drill has settled in well, it is a metre wider than the old one, and consequently gets the job done a bit quicker, we were worried that the tractor would struggle to pull it, but it seems to be coping.  The drill seems to have done the job right and sown the seed the right way up, because the crops are coming out of the ground ok.

The animals are also behaving in a spring-like fashion, there are some naughty sheep, which we bought last autumn, who, by starting lambing two months early, are betraying the fact that they were visited by a ram when they shouldn’t have been.  They must have already been in lamb when they arrived, to some wild welsh hermit ram probably.  The rest of the flock are better behaved, and, as confirmed by the scanning two weeks ago, are due to lamb in May, when there should be more grass and warmer weather, more conducive to lambing.

Love is in the (h)are

Whilst out spreading fertilizer the other day, I saw several hares in different fields, although it is always tricky to judge whether they are just the same ones running ahead from field to field, just to fool me.  They were all displaying ‘Mad March Hare’ behaviour, more simply described as chasing each other around in circles, which I think is more to do with pheromones in the air than anything else. 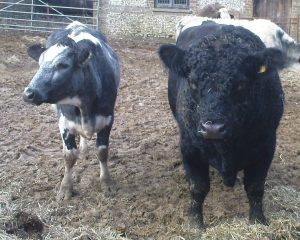 The Aberdeen Angus bull has been here for about six weeks now, and we hope that he has finished his work now, if not then he obviously didn’t do a very good job the first time round.  He and the  heifers are still tuking into prime hay in the yard at Websley, and still seem pretty happy and peaceful in there.  We had the vet round last week to do our 2 yearly TB test, which, fortunately went without a hitch or a reactor.  It’s a pretty pointless test mind you, seeing as the biggest source of TB is still allowed to run around the countryside spreading it about willy-nilly, and there is nothing anyone can do about it because of its ridiculous protected status.  I apologise for banging on about this again, but it is a national scandal that the government doesn’t have the guts to do the right thing, which is to allow the removal of infected wildlife, leaving only healthy wildlife, and healthy farm stock, to the benefit of all. 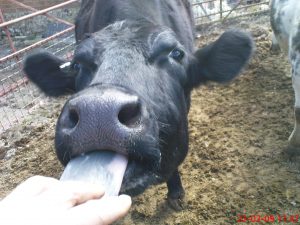