Sun’s out, coats off, now it’s time for a good old scratch.

This lovely spring weather has been a real treat, we have got most operations on the land fairly up together, most of the spring barley and all of the poppies were sown into lovely seedbeds between the 10th and 20th of March, about as early as we can ever manage.  The barley is up and away, looking beautiful in its vigorous straight lines marching across the fields. 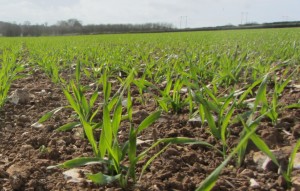 The poppies are slower to emerge, they would have liked a little more moisture and warmth to get the tiny seeds off to a good start.  They are only sown into the top few millimetres of the soil, so are quite vulnerable to drought until their roots get down into the soil, whereas the barley is sown at 30mm, where there is more moisture, the bigger seeds contain  more energy in the form of starch, to get the plants going more vigorously. 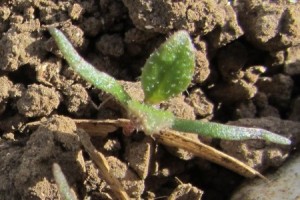 It seems crazy that we sow winter barley in October and harvest it in July, whereas the spring barley is sown in March only to be harvested 5 months later.  In our case the yield is actually higher for the spring barley too, however the winter barley we grow is a particularly sought after variety, named Maris Otter, which this year celebrates its 50th year since being bred.  It is a remarkable tale; Otter was a popular malting variety with farmers and brewers alike in the 70s and 80s, but eventually it was superceded by higher yielding and more disease resistant varieties.  As it became less widely grown and nearly died out, it was realized, fortunately before it was too late, that this was too important a variety to lose, its flavour in the brew, and reliability in the brewing process could not be matched by any of the newer varieties, and slowly it has crept back in popularity with a small band of growers who have a passion for growing something special, for an identifiable market, led by the new owners of its breeding rights, Robin Appel, who we now grow it for.  Demand has been steeply increasing for the reliable and flavoursome malt made from Maris Otter barley.  Many of the craft breweries that have been established in recent years understand the advantages to their beers that Otter brings, and as well as in the UK there has been an explosion of microbreweries in the US, and a busy export market has developed for the fine malting barley grown on English chalk soils. 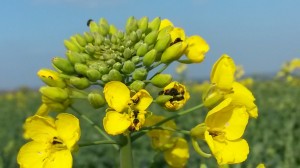 Elsewhere on the farm, the oilseed rape is bursting into flower, love it or hate it you can’t fail to notice the bright yellow fields at this time of year.  If you look closely, you may see this year that the rape flowers are crawling with small shiny black fellows, the pollen beetle.  It is easy to worry about these when numbers develop very quickly in a sunny but late season such as we are seeing this year.  They are intent on guzzling pollen, which does no harm to the plants if the numbers are not too high and the flowers are open, in fact they are an aid to pollination.  However we worry when they attack before the flowers have opened, because they will burrow into the back of the buds in search of pollen, and this will cause the flower to abort, and we will get no pod or seeds from that flower.  It is permissible to spray for pollen beetle if their numbers reach a certain threshold before enough flowers have opened, although we have to be careful to use chemicals that do not harm other insect species, such as bees, and beetle eaters. 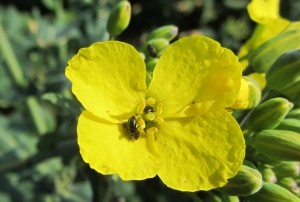 Generally winter rape does not need this treatment, as it flowers early in the spring, before beetle numbers have built too high, whereas spring sown rape can be a nightmare, because all the beetles that have fed on the winter rape for weeks suddenly find their food supply runs out when flowering ends, so they seek out other tasty pollen sources.  We gave up the battle to grow spring rape many years ago because of this. 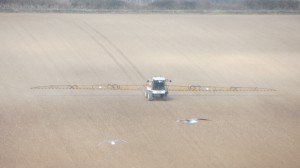 When the weather has allowed, the sprayer has been busy out in the fields.  On the spring barley we applied a pre-emergence weed killer, which will hopefully take care of a good deal of the weed population for the season.

On the wheat we have applied the first of four doses of fungicide to keep the dreaded Septoria disease at bay, plus a growth regulator to ensure the crop stays upright for the season.  We have also applied most of the fertilizer for the season now, also using the sprayer, we use liquid nitrogen fertilizer, which is quicker and easier to apply as well as being more accurate than traditional granules.  It is also less vulnerable to windy weather and light rain. 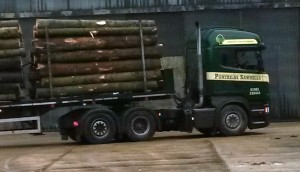 In the woodland this season’s thinning of spruce is complete, and a huge pile of logs at Websley is now being removed by large lorries, who are taking the trees to a sawmill in Wales to be turned into fence posts and garden fence panels amongst other things.

We had our first school visit of the season during March, a bit earlier than ideal, however we were lucky on the day, the children kept out of the wind in our farm tour trailer.  We visited the yearling cattle at Websley, and our orphan calf from last year, Mookie, who is doing his best to catch up with his brothers and sisters, by being fed pellets whereas the others only get silage.  Unfortunately no cows would oblige by producing a new calf on cue, although there are now plenty of calves to entertain, for video of calves playing in the straw, please click here.  The children also got a lesson in hedge laying, and a description of how to make hurdles and thatching spars, which our hazel coppice is turned into.  This winter we have had three men working on hedge and hazel at two gates.  Coppicing the hazel on a seven year cycle creates a unique environment which is a haven for a wide variety of plants, animals and insects.  The children also had a good chance to burn off some energy running up and down grassy banks. 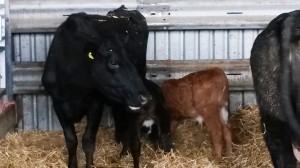 In the cow shed at Shepherds Corner calving is grinding slowly onwards, the last eight cows seem to be in no hurry to bring their young into the world, while the older ones are growing fast and are full of beans, always fun at bedding up time, they like to join in and charge round the pens helping to spread the straw. Click here for video.  We had a shock to find one day a few weeks ago that one of the cows had suddenly died, and we had an orphan on our hands, the only ginger calf of the season so far.  Fortunately he is a robust little fellow, and after a day or two of bottle feeding, which he wasn’t all that keen on, we realized he was pinching milk from other mums, especially when they were busy at the silage feeder.  Several weeks later and he is growing well like the others, so he must be getting enough milk.  Most of the cows have more than enough for two, we have two sets of twins as well, so someone is feeling sorry for him, or simply doesn’t mind.  Video of him feeding can be found here. 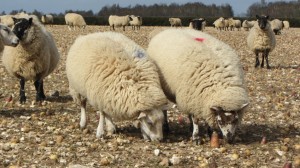 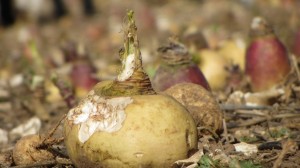 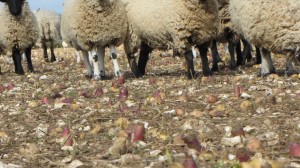 The sheep, some of whom are still clearing up the last of the turnips at Thornicombe, will be brought back this week, in preparation for shearing in a couple of weeks, we are unusual here in that we shear early and lamb late, a system that has worked well for the last 15 years.  The lambs arrive just as the grass growth gets into gear on our steep hills and valleys behind Durweston, and we don’t have to disrupt them for shearing in the heat of June like we used to.  As always we ask that people take please take great care when walking on footpaths at this time of year, sheep are very easily upset by noisy and bouncy dogs, lambs lose their mothers and can die from starvation. 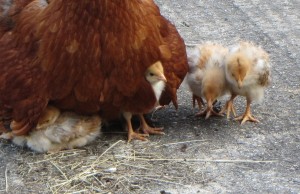 The hen and chicks who have featured here over the last couple of months are thriving and have long fled their stable.  One chick has been lost, we know not where, and last week the hen suddenly deserted her brood, she had obviously got to the point where she’d had enough, and they would have to fend for themselves.  Six weeks of mothering doesn’t seem much, though she seems very happy back with her own brothers and sisters.  The chicks flit about the yard in a happy troupe, and seem far too blasé about traffic on the road when they go out onto the verge outside the yard.