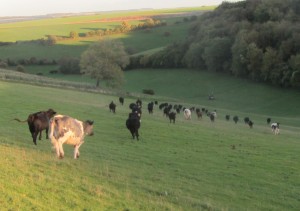 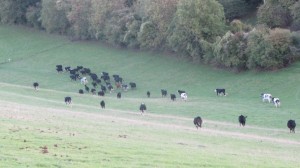 What is it about a steep slope that makes people (or animals) want to charge down it, without a single thought that they might have to climb back up it again?  Well in this case the cows and their offspring didn’t have to climb back up, they were on their way to fresher pasture down on the meadows, where they spent a few weeks before it was time for pregnancy diagnosis (see my notes from this time last year for the mucky details).  A couple of weeks later we weaned the calves, by then about 8 months old, and apologies for the night or two of excessive bellowing from behind Knighton School.  The mums are now indoors for the winter, at Websley, on a diet of silage, with straw underfoot. 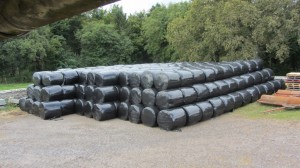 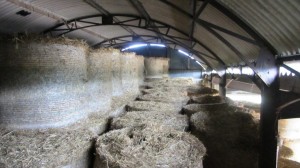 The big heap of black bales and barn full of straw bales will deplete steadily from now until next March, leaving us with a pile of lovely muck, and some plastic which will all go off for recycling, as well as, we hope, a new crop of calves when the cows have finished incubating them. 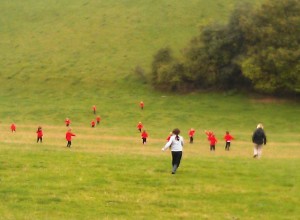 Back in September we had one of the last school visits of the year, and the most obviously enjoyable entertainment for the children was the easiest to organize:  “See that steep slope there, who can get to the bottom the fastest?”  The keener teachers seemed happy to join in, but were hard put to keep up with the 5 and 6 years olds!

Luckily the children did not leave the enormous divots that the cows kicked out of the ground as they charged down the same hill a couple of weeks later. 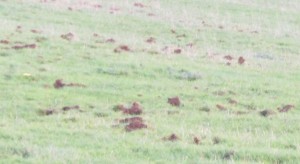 The PD exercise this year revealed that of the 58 animals presented to the vet, 55 were declared pregnant, three were empty, one a bit old and thin, who may now be past child rearing, one who will be given a second chance next year, and the third, a maiden heifer, will bear no calves no matter how many chances she is given.  Being a heifer this was her first time, and when the vet began his inspection he very quickly discovered she was what is known as a Freemartin, which means she is infertile.  This is due to the fact that she would have been one of a pair of twin calves herself, and her sibling would have been a male calf.  The male hormones from a sibling bull calf in the womb are sufficient to render a female twin infertile, as their blood supplies are shared from about the fortieth day of pregnancy. 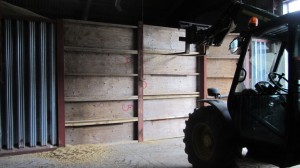 Since October we have been sending on a steady stream of lorries full of grain to the usual destinations; wheat to local feed mills or to boats at Southampton or Poole for export, and barley to the maltings of East Anglia.  The first couple of loads out of the store are always tricky, because we have to remove the boards that hold back the grain in the doorway, and this results in an avalanche of grain which pours out all over the yard.  We always need a couple of lorries here on the same day to be able to clear enough grain to enable us to close the door before nightfall, and we have to hope that it doesn’t rain during this operation.  These days the boards are designed so we can lift them out with the forklift, but a swift reverse is required if the machine is not to be buried in the avalanche. 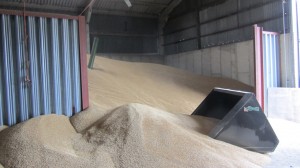 Luckily our wheat this year is of hugely better quality than the terrible shrivelled stuff which we harvested in 2012, due to the lovely summer we have had in 2013, which kept disease at bay, and enabled plenty of photosynthesis resulting in nice plump grain.  It is easy to see the difference in a handful of grain, it is also easy to see the difference when loading a lorry.  Last year our weighlog on the forklift never got beyond around 1.75 tons in a bucketful, whereas this year it is easy to fit 2 tons in every bucketful, a sure indication of the better density of the grain.  If only I could say the same of our spring barley, which tells rather a different story.  For reasons still not fully understood, most of our barley has produced a very poor sample.  Much of the grain has not met the specification for grain size, and so will have to go for animal feed, rather than the more valuable malting market.  This is no doubt due, as usual, to the weather, a very cold, slow start at the season had a major effect, followed by the dry summer months, which on the clay cap soils most of the barley was sown into this year, struggled to provide sufficient moisture for the forming grains.  Add to this the galling fact that many areas of theUK, and indeed most of northerneuropetoo, have had a bumper barley crop in 2013, which has depressed values of malt and of feed barley, all of which means that spring barley this year is the poorest performer of all of our crops.   Rather than finish on a miserable note however, I am happy to report that the poppies have had their best year ever, second only to wheat in the annual league table, the wall to wall sunshine through June and July was just perfect for maximum performance in the poppy field.

So an excuse for a couple of pretty poppy pictures from last July: 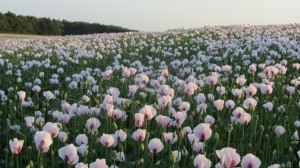 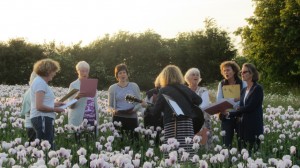