If we grew nuts on a field scale, I imagine I would not feel particularly friendly towards characters like this colourful fellow.  Luckily we don’t grow nuts, so I didn’t need to worry when I saw him flying free in the Dorset countryside the other weekend.  I wonder if anyone knows where he lives? 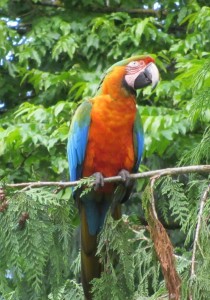 I can’t help thinking that this season, we should have planted rice, we had so much rain in April, May and June and we haven’t yet managed to settle into a nice reliable spot of warm summer weather.  The wet weather has encouraged high levels of disease in the wheat in particular, septoria tritici, which is a serious wet weather disease, and most of the fungicides we use on wheat are targeted predominantly at this one disease, which can decimate grain yields.

It destroys green leaf area, thereby reducing the plant’s ability to photosynthesise.  On a more positive note, although spray timings have been considerably stretched by the wind and rain, we have managed to preserve most of the top three leaves in most of our wheat crops, which are the important ones for grain filling.  The spring barley has remained reassuringly clean so far, in spite of wet conditions.  It grows so fast in a short season, that it is quite good at keeping ahead of disease, and usually only needs two low doses of fungicide to last the season, whereas wheat needs four, one every three to four weeks through the main growing season.  The sprays on the cereals and the rape are now all complete for the year, just the poppies need a bit more attention, to keep the downy mildew at bay in particular.  This disease can make a real mess of the poppies, and the sprays are not so effective or long lived as the cereal ones, so we have to aim to spray every two weeks, which is a bit of a bind in a catchy season like this one.  June has presented us with 184mm of rain so far, our previous record was 123mm in 1991, the average for June is 53mm! 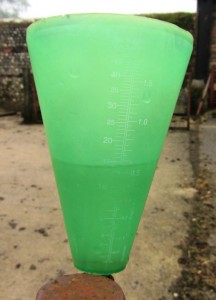 One of last week’s excitements involved a trip to the new Hall and Woodhouse Brewery in Blandford.  It includes a brand new brewhouse, with very impressive and attractive brewing vessels, all in all a £5 million investment. 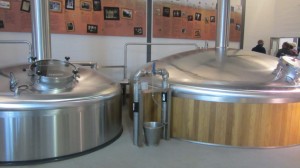 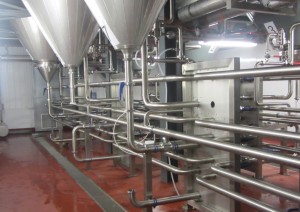 To see a local family run business so committed to the brewing industry is very encouraging, especially to us as growers of a key raw material, the barley, and just occasionally as consumers of their fine ales too. 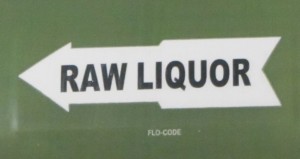 It was fascinating to hear how the head brewer constructs his brews, with details such as how finely they grind the grist in the mill, depending on the quality of the malt.  The fineness of the grind affects the amount of sugar that can be extracted from the malt, (which then feeds the yeast that makes the alcohol).  The brewery uses around 2500 tonnes of malt per year, which represents the barley harvested from around 1250 acres. 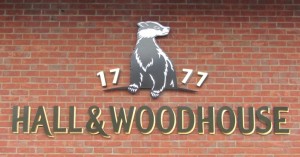 This month we have seen the lambing season progress, and draw to an end.  The main reason that we lamb so late is to take advantage of the supposedly warmer drier weather of early summer, but this having been turned on its head has meant the sheep have got pretty fed up, we have had quite a few losses,  and we have had to provide foster care for seven noisy lambs. 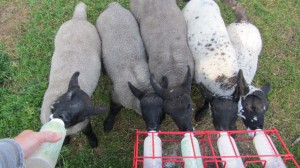 Despite the cool weather, and incessant rain plenty of growth has been taking place, the lambs are expanding steadily, and if we sat down for long we would really notice other things growing too.  These pictures were taken in the same field, 23 days apart, and there’s a big difference! 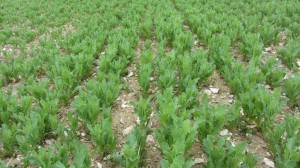 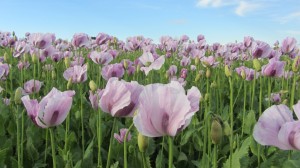 My final story this month relates once again to our feathered friends, and concerns a poor old cockerel, let us call him Copper, who used to be the finest and proudest fellow in the farmyard, and had the pick of the hens. 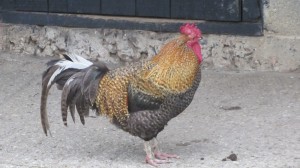 Now he is a sad old fellow, reduced to wandering around the yard on his own, because the new young kid on the block, who is known as Silver, has pinched all his birds, and swaggers about like he owns the place. 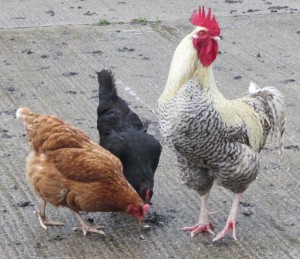 Whenever poor old Copper hoves into view, Silver, not simply content to swagger even more self-importantly, makes a beeline for old Copper, and attacks him, pecking, flapping, squawking, and poor old Copper scuttles away, and spends his time sitting in the long grass, dreaming of the days when he was cock of the roost.  He doesn’t dare return to the hen house until Silver and his ladies are up on the perches, then he hops up onto a perch at the back of the shed, where, as the light fades, one or two of his old lady friends sidle along feeling sorry for him, and spend the night next to him. When morning comes, they will be off again with that cocky young upstart, and so the pain begins again for poor old Copper.