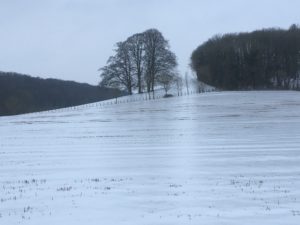 Shiny snow was a novelty, the fresh fall on Thursday 1st March, followed by freezing rain and another freezing night resulted in the most unusual conditions.  The animals didn’t like it, our dog ran across the frozen surface with claws outstretched, unable to gain much traction until she broke through the surface which brought her up sharp, she didn’t like that at all, and wanted to spend the rest of the day indoors.  3-4mm of ice over the snow was a very crunchy topping, the like of which I have never seen before, it turned the fields into huge shiny white rinks, which if the sun had come out would have been dazzling.  Fortunately it didn’t last long, there was a bit of fun to be had for a couple of days, but by Monday most of it had gone. 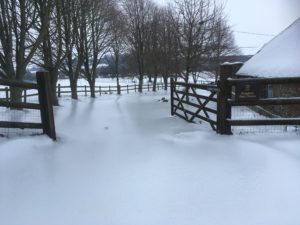 Regular readers will recall that our first calf of the season arrived as I was writing last month’s view.  Well since then, through the snow and rain, the cows have continued to pop them out, 38 to date, more than one a day, which is pretty good going, the bulls were obviously on good form last summer.  None had required any assistance from human hand until last Thursday, at around 9pm I got a call requesting assistance with a cow who had been trying to calve without success for several hours. We had to pen her in a corner so Dougal could investigate what was going on, legs and head were presented correctly, so we hitched up the calving jack, a clever device which gently lends assistance to the cow to push the calf out.  The problem was simply that the calf was a big one, and the cow couldn’t quite push him out on her own, once out she was soon licking him off, and it wasn’t long before he was up and drinking.  But before we could go home for the night, we had to deal with a second, younger cow, who had also been on the go for some time.  She is normally a very friendly creature, and will let us rub her head and scratch her behind the ears, but once penned up an altogether trickier side of her character showed up.  She would not stand still so we had to slip a halter over her head and tie her to the corner of the pen, so Doug could safely examine her.  We decided to help again with the jack, to avoid a long night of waiting and worrying. After rather too much struggling we managed to extract the calf, and as soon as we presented him to the grumpy mother her temper evaporated and she started licking him off straight away. 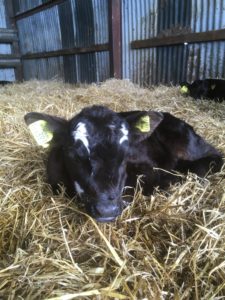 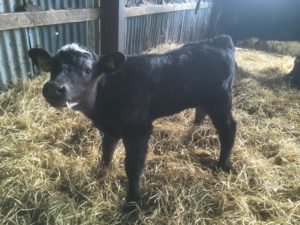 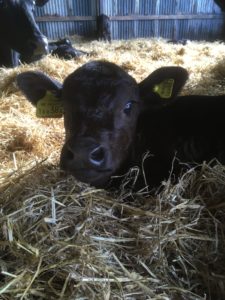 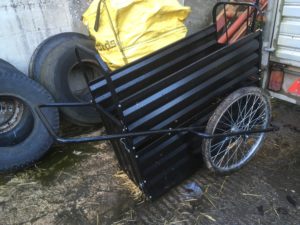 Spotted on a local dairy farm recently, a very handy calf chariot, for safely and securely moving calves around the farm, with or without mother in attendance, also good for administering medicine, ear tags etc. 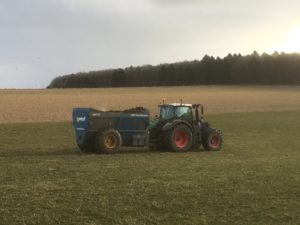 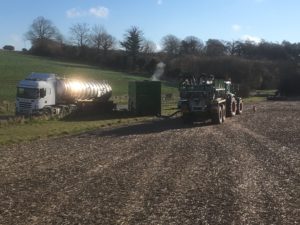 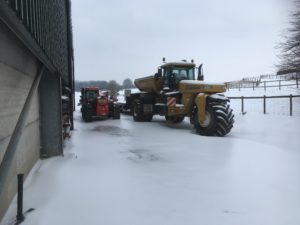 In the dry period before the snow came, we were beginning to get excited about moving some soil in preparation for spring sowing. George Mogridge’s muckspreading team were here for a couple of days, throwing chicken manure and well rotted cow muck about the place, then Gary was able to get on with the cultivator to work it into the soil.  Ben Stretton came in with his giant 3 wheeled Terragator to spread Lime and fertiliser. This is the fertiliser which comes from power stations where they burn chicken manure, the ash is a very consistent product which provides many essential nutrients and some organic matter for the land.  And to add to the busy atmosphere, Nick Bragg’s team came in with digestate from his anaerobic digester to apply on several fields.  This was a time where it was essential that I had done sufficient homework beforehand, to ensure that the right amount of material was delivered, and that each team knew what was to be spread in which field.  We were very lucky, most went very well, and the ground being dry meant that not too many wheelmarks were visible after the machines had passed.

Needless to say, since the snow melted, we have had a great deal of rain, and no more work has been done on the land.  We are waiting patiently for the next weather window, there is a lot to do, it is turning into a late spring, and the jobs are piling up.

During the half term break, we spent a few days in central Italy, taking in some beautiful landscape, winter vineyards, snow capped mountains, and plenty of food and drink.  We were taken on a tour of the very impressive Lungarotti vineyard.  The cellars were a delight, crammed with beautiful casks made from French oak, it was easy to detect how red wines can acquire an oaky aroma when matured in such casks, the wood smells wonderful.

We finished with a tasting session, and were pleased to find that we were not obliged to spit out each wine after sampling. 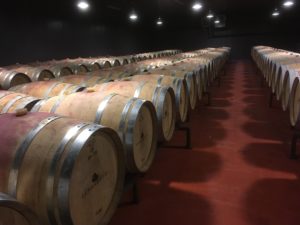 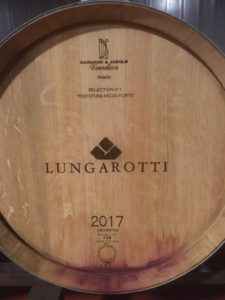 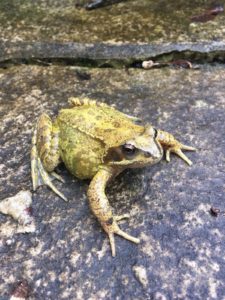 We weren’t the only ones to be fooled into thinking that spring had sprung early, this fellow was active in the garden well before the snow arrived, I only hope he found a warm corner to hide in.  The pond in the garden next door was the source of a lot of toad-like noise a few weeks ago, I suppose that would be the mating call of the common toad, a constant low level of croaking for several days.  I think they might have wished they’d stayed at the bottom of the pond for a couple more weeks. 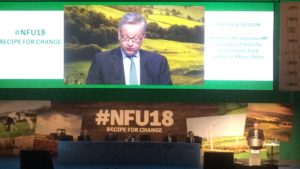 Political debate amongst farmers and the food industry reached fever pitch in February, when the NFU annual conference was held in Birmingham, and 1500 delegates invaded the city for 2 days of debate.  As is customary, the first session of the conference was addressed by the Secretary of State for the Environment, currently Michael Gove.  He repeated many of the interesting ideas he had first announced at the Oxford Farming conference in January, this time he even managed to mention food production, and that perhaps it was quite important after all, having failed to mention it at all in Oxford.

UK farming is most definitely at a cross-roads, however no-one knows which road to take because there are too many decisions that must be made by government first.  Questions regarding Brexit, such as whether we should have a sensible transition period? How much we will support food production, if at all, after we leave the EU?  Whether there will be any protection from food produced elsewhere in the world to lower standards than currently exist in the UK? And many more.

At the question and answer session at the end I felt that Mr Gove was given an easy ride, he didn’t face any awkward questions about why his department had screwed up so many farmers maps, or about why so many farmers, who have delivered cheap food, and environmental goods such as bird food, and pollen and nectar for bees and butterflies, in 2017 or earlier, have not been paid.  If the Government cannot honour its side of the bargain now, how will they deliver Mr Gove’s brave new vision for UK food and farming when we leave the EU? 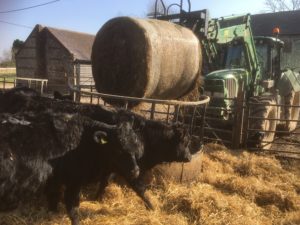 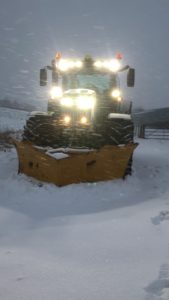 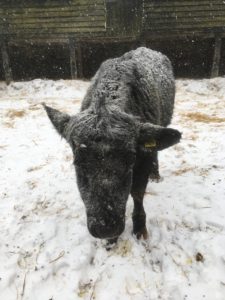