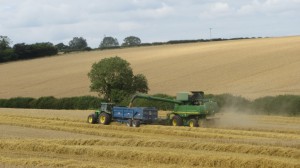 I promised some combining pictures last month, so here we are……… 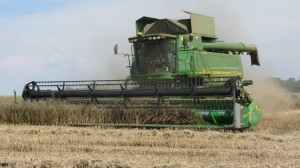 It’s been full on here since the 1st of August, the latest start to harvest any of us can remember, so against all our predictions, many of the crops never did catch up on the very late season.  Once we got going we found we hadn’t harvested at this pace for a good many years, memories of 7 days cutting on the trot are dim and distant, but once we managed to find some ripe crops, everything seemed to need cutting at once, and for much of the time, the weather has been very helpful, even if the forecasters hadn’t predicted it.  These two pictures show our combine munching up spring barley, and oilseed rape, 142ha of which we managed to knock off in just over 3 days, wonderful progress.

Fortunately with the dry weather, the baler men have been able to keep well up behind the combine mostly, an assortment of bale sizes have appeared in different fields, and biggies like this Class 3300 towed by a huge Fendt 360 hp tractor, can make short work of 100 acres of 30 foot combine swaths, then in come the loaders and trailers, on go 14 tonnes of straw and off it goes down into west Dorset or Devon.  There is so much pressure on much of the ground to get the fields cleared, cultivated and sown with the next season’s crop, that no matter how helpful the weather, the baler men are very rarely given the recognition they deserve.

One of our regular customers came  in today to bale up some good old fashioned small bales, rather fun in a quaint and nostalgic fashion, only 350 though, not the 10,000 per year that we used to make in the bad old days.  I didn’t get a picture of him I’m afraid. 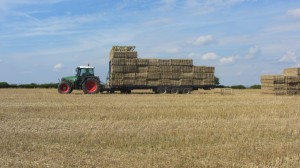 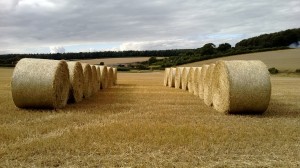 Here’s the poppy harvester at work, charging along at a ridiculous speed, the problem with their system is that they always seem to leave a lot of poppy heads behind, so we have to go in after them with the combine to tidy up. 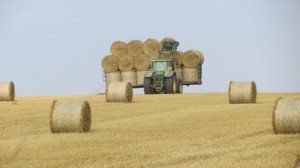 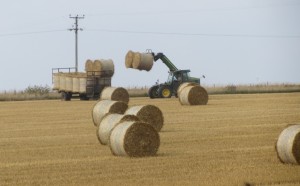 As of today we have cut around 190 ha of barley, 142 ha of rape, and 150ha of wheat since we started, as well as half the poppies.  Our local combine dealer can never resist the opportunity to try to sell us a new machine, even though we have assured him we are quite ok with our current machine thank you very much, you could buy a decent house for what one of these machines costs these days, so it is not a decision taken lightly.  Even after telling him this, he still insisted on coming to cut some of our corn with his current top of the range machine, and very fine it is too, so it would have been unkind of us to refuse. 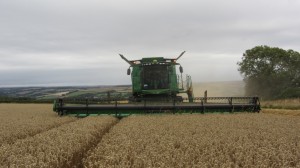 Here it is, with its magnificent 35 foot header, wading through some of our wheat yesterday.

As I said, there is not much wrong with our own 7 year old machine, it managed to cut 350 tons of wheat on Friday, which takes some dealing with in the grainstore, Although we did have to waste all of Wednesday, and half of Thursday dealing with a complicated breakdown, which can be summed up in the picture here. 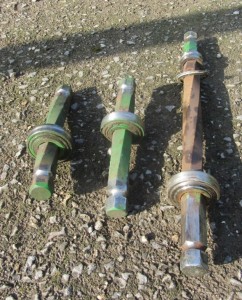 These shafts are supposed to be straight and untwisted, the long one is twisted a whole 180 degrees, contemplating the force  required to do this makes me sweat a bit, and it is no wonder the machine wasn’t running sweetly. .Must go, more to cut and dry…