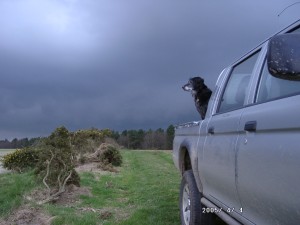 The dog watches the grey clouds roll in, little realising how wet she is going to get.  This year it was real April showers, 80mm in total, a bit less than the average, but cleverly arranged to stop us doing the same job for very long. 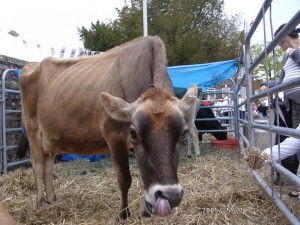 This beautiful animal, a jersey cow who lives in Langton Long, spent Monday watching hundreds of strange people who weren’t wearing rubber boots staring at her.  She was quite relieved that there was a strong steel barrier to keep them at a safe distance.  If you ever wondered how long a cow’s tongue is, and what it’s for, well now you know…..

While some of us were down at the Georgian Fair on Monday, spreading the word on behalf of food, farming and the countryside, someone else was left at home to organise the shearing.  A couple of strong men came along and sheared over 400 sheep between them, luckily the sheep were indoors all night in case it rained, you can’t shear wet sheep.  What they don’t need now is too many cold nights.  We have delayed lambing this year, to enable us to shear the sheep earlier than usual, before lambing, in the hope that this will help prevent fly strike, which often happens once the weather warms up, and is always worse before the wool is taken off.  The trouble for late lambing flocks is that after lambing you can’t shear for several weeks, until the lambs are big enough to be sorted from their mothers for the day. 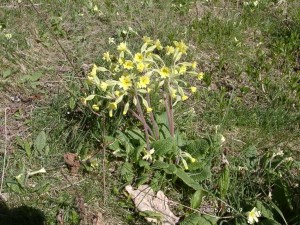 This picture shows a plant found amongst cowslips on downland locally, a local botanist calls it a false Oxslip, in other words a cross between cowslip and primrose.  True Oxlips are rare around here, and are more often found in Norfolk.  Whatever its name, it is a beautiful specimen, as are the oceans of cowslips around them.