You might think we have had an exceptionally wet and miserable January?  Wet and miserable certainly, but exceptional?  A loud NO!  Average rainfall for January here is 113mm, (4.5 inches), and we only recorded 93mm this year. It all fell in small amounts, interspersed with unexciting dull periods, mostly cold, but very little frost, until this week, the first in Feb, when we have had several very useful proper cold days and nights. 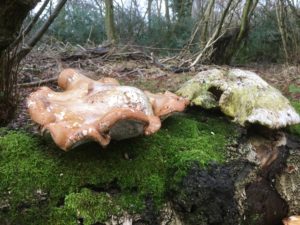 Ugly fungus on a bed of moss

As the grass has run out around the farm, the ewes have moved from field to field, eventually ending up on the Hill eating forage rape and turnips.  Here is a picture of Rocky in the footbath with his friends, just before taking his winter holiday with the ewes.  He is taking on the look of the hermit ram of legend.  Head and shoulders above most of the rest of the flock, and utterly useless, he has been part of the scenery around here for more than 5 years.  He is always popular with school visits, and loves dried toast served up by children. 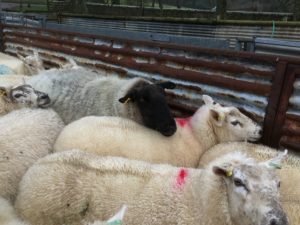 Last year’s lambs have been stuffing themselves with turnips since before Christmas, and we have now taken 2 draws from them.  They always fatten well on turnips, and we are already half way through them, we start to wonder if we will have enough mouths to eat all the turnips before we want the field back to sow barley in next month. 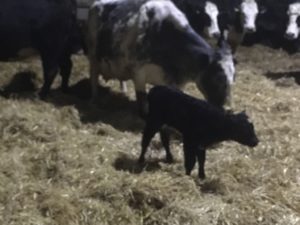 Whilst writing this Dougal has popped up on Whatsapp with this picture, the first calf of the season, born this evening, just 3 days earlier than the first one last year.  The proud Mum in the picture is one of our originals, who must be 11 years old by now, probably calf number 9.

Gary and Brendan spent most of Monday and Tuesday this week mucking out the cow shed, in preparation for calving, so just in time then.  There must have been 3 feet of muck throughout the shed, comprising over 200 bales of straw, and the poo derived from nearly 400 bales of silage fed since housing in mid November. The muck was all hauled up to the hill where it will rot down for a while before we spread it in the autumn.. This is how much there is. 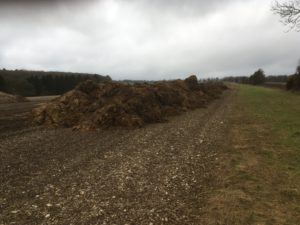 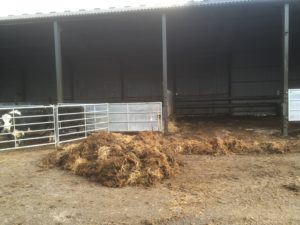 January is a time for meetings, training, and any other excuses you can think of to spend time indoors, when it is cold, dark and wet outside.  Recent NFU meetings have been interesting, as we dissect and digest Mr Gove’s suggestions as to how UK agricultural policy might change as we move away from the EU. Much of it is sensible, and in places quite revolutionary, but one wonders how on earth they are going to administer any new policies when the agency currently responsible for this (the RPA) consistently demonstrates mind-boggling levels of incompetence.  We are currently knee deep in a re-mapping exercise, which the RPA has decided is necessary in order to fend off a £75M fine from Europe, for alleged ‘mapping irregularities” in 2015,  the year of the complete breakdown of the RPA’s supposedly bomb-proof computer system. Since 2005 all UK farmland has been digitally mapped, and every year we have to tell them what we are growing on every parcel of land.  What they are creating now is a self-inflicted extra workload for both them, and farmers, of monstrous proportions. Many errors are made because they are using satellite imagery, which cannot detect all field boundaries or determine all necessary detail.  Where they have made mistakes, we have to fill in a form to send in pointing out each and every error. 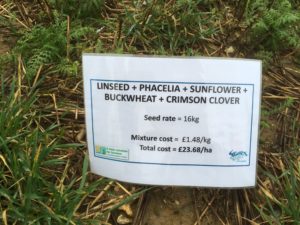 Much more positive was a very useful meeting last week, the first half of which was held in a freezing field near Dorchester, looking at cover crops.  The trial is run by Wessex Water, who are working with farmers on a range of soil and water protection issues.  We were shown a wide selection of different plant mixtures sown into ground that would otherwise have been bare stubble over the winter.  Modern thinking holds that the soil is healthier if there is a growing crop in it throughout the winter, the presence of live roots, preferably from more than one plant species, enourages the activity of the flora and fauna of the soil, bacteria and fungi, which contribute to the organic matter and general health of the soil.  A healthier soil should grow better crops because the levels of organic matter determine the ability of the soil to hold nutrients and water available for plant growth.

The second most important purpose of cover crops is to act as a sponge. Many of the regular crops we grow, to which we apply artificial fertiliser, are quite inefficient at using up all the nitrogen we apply, so that at the end of the season there can be free nitrogen left in the soil.  Every year we sow turnips on some fields, which are good at using up this unused nitrogen, and turning it into something useful. Other cover crops, such as phacelia, buckwheat and linseed will also soak up unused nitrogen, and will hold it in the plant structure thus keeping it in the usable zone for future crops when the cover crop has died and decomposed in the soil.

For the second half of the meeting we repaired to Charlton Down Hall, a very fine venue, where one of the speakers, an early innovator and enthusiast for cover crops, regaled us with his experiences, summarising his journey with the following diagram, which frankly could be used to describe the history of a good many human endeavours. 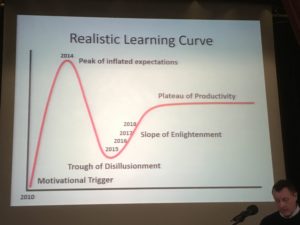 When deciding which cover crops will best suit our own farm, we need to consider a number of factors, the cost, how to sow it, how to treat it, and how to destroy it at the end so we can successfully establish the next crop in the spring, be it barley, poppies or beans.

The seed companies have very quickly jumped on the band wagon, and now offer all sorts of exotic cover crop seed mixtures, so we must convince ourselves of their value and usefulness in the long term.  We had a go at sowing some kale into standing wheat just before last harvest, this is quite a common technique, allowing the new seeds to germinate in the shade of the ripening crop, getting a  head start before the old crop is cut, and time is spent waiting for the straw men to bale and clear the fields.  This can make a month’s difference, which as autumn approaches can make all the difference.  The difficulty when sowing before harvest is not damaging the crop, and we are looking with envy at a machine we can fit to the sprayer which will spread seed the full width of the sprayer, thus not squashing any wheat. Can we justify the expense?

I am wondering if the current trend towards cover crops will mesh well with Mr Gove’s brave new world for UK farming, I suspect it will, but will he force us to record every acre with the RPA? I very much hope not. 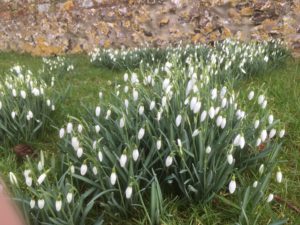 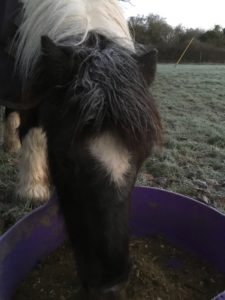 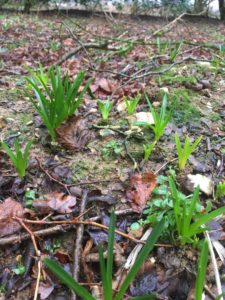 The bluebells are on their way 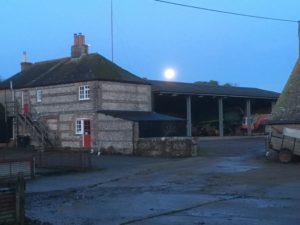 The Super Blue moon setting over the tractor shed