We find ourselves enjoying a wet and muddy November, somewhat suitable for this month perhaps, in the 100th year since that awful war.

The first half of the month has dumped nearly 5 inches of rain on our new seedbeds, and some have suffered a bit under the onslaught, however in the last few drier days we have managed to catch up with much of the delayed autumn spraying on the wheat and barley; mainly weedkillers, plus aphicide to prevent the spread of yellow dwarf virus which is carried by aphids while the mild weather continues. We could really do with some cold weather to slow them down naturally.  And preferably a few frosty nights, so we can blow some cold air through the grain heaps, some of which are still above 15 degrees, when in an ideal world they should be down to 5 degrees by December to prevent the growth of moulds and grain eating insects.  It is hard to achieve this when the temperature has hardly dipped below 12 degrees for most of the autumn so far, we need a temperature differential of at least 6 degrees to make it worthwhile turning the fans on, they can eat a lot of electricity. 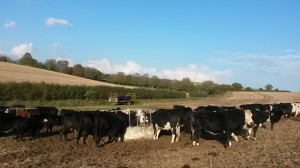 The cows and their calves were moved off the meadows a couple of weeks ago, as the grass ran out and they were in danger of poaching the ground in the endless rain.  We brought them up to a stubble field at Travellers Rest where we could feed them some silage before housing without worrying too much about the mess underfoot, it will be sown to spring barley in the spring.  Last week we rounded them up so our Vet could pregnancy diagnose the cows, a result of 5 empty out of 55 was a little disappointing.  We then took the calves away to Websley, and had to endure a couple of noisy nights while they bellowed for each other.  Today finally we managed to complete alterations to the cowshed at Shepherds Corner, so could bring the cows inside, to some clean straw bedding, sweet silage, and shelter from the rain. 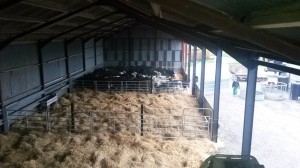 The picture shows them all crowded into one pen before they were sorted into small, medium and large, so they can be fed accordingly, with the best, not quite so tasty, and even less tasty silage.  The calves are in the yard at Websley this year, rather than wintering outdoors, where we hope they will thrive better than outdoors, as previously, on turnips and mud.  This will cost us more in straw, but we hope will be easier in the long run.

Many of the lambs are now grazing on turnips over on the land at Thornicombe, soon to be joined by the rest who are just tidying up the last of the grass over here, including our 5 orphan lambs who are well grown now, and deserve another picture here as they haven’t featured for a while. 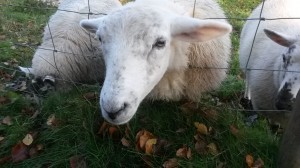 Many local people may remember our own unintentional commemoration of the fallen brave soldiers in the Great War, two years ago, when we had a bit of misfortune with our poppy crop on the Knoll.  Images of that field have been used by various people since then in a variety of situations. 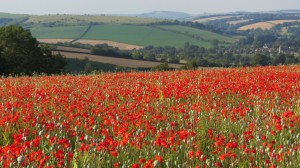 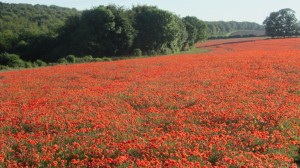 A couple of weeks ago I was in London, and lucky enough to have time to go and look at the poppy installation at theTower of London.  All the TV and newspaper pictures cannot quite convey the power and emotion of that very moving spectacle.  Nearly 900 thousand poppies, each representing a British or Commonwealth life lost between 1914 and 1918.  The thought of how big an area would be covered by all those people standing shoulder to shoulder is quite overwhelming.  I stood for some time watching the volunteers assembling and planting the beautiful ceramic poppies in the last corner of the Tower moat, and because of the rain, the grass beneath had turned to mud as the people walked back and forth collecting more stems and flowers to plant.  Visions of the tragic muddy battlefields flooded in, and of all those lives lost, some sixteen million in all. 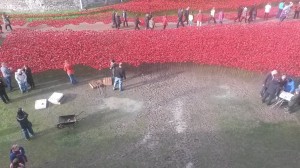 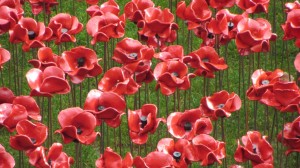 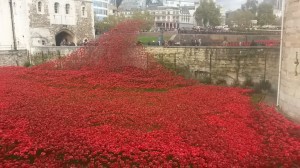