Three or four inches of rain later we are feeling very relieved, suddenly the pattern of early spring droughts is broken, and we are saying that’s enough for now, please can it warm up again, like March. The rain will wash in the fertiliser, and make everything grow. We’ve had classic April showers lately, hail included, some call it the blackthorn winter, for obvious reasons. 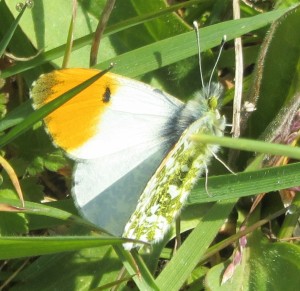 No sign of any swallows quite yet either, but I saw an orange tip butterfly today, so someone thinks spring has sprung.

I also managed to catch these little fellows on the nut feeder today, who are usually well out-numbered by blue tits and great tits, or are chased off by the woodpecker. Has anyone tried feedingnigerseed? It is a very effective magnet for goldfinches, who adore the stuff. I think it is similar to the seeds of the teasel, but of course these get eaten very early in the winter. The goldfinches empty the feeder within a very few days, and in the process manage to spill a lot of the seed on the ground, as they are so wasteful we don’t refill too quickly, and they have to go elsewhere for a while, but as soon as we fill up, they are back in force, I wish I understood how they find out so quickly. 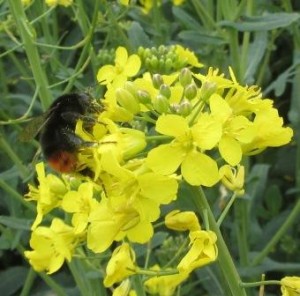 You can’t have missed the rape in flower all over the place recently, it is full of insects collecting nectar and spreading pollen about, for which I am very grateful. 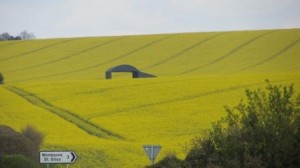 For video clip of bumble bee at work click here

Driving up the road to Salisbury yesterday it seems that half the farmland everywhere is down to rape this season, something to do with the favourable prices over the last couple of years I am sure, however good agricultural practice dictates that we should grow it no more than one year in five in the rotation, otherwise we risk serious disease breakdown. Some farmers who like to live dangerously risk growing it as little as one year in three, but the long term cost if clubroot or other diseases get in is too great for us to risk it. 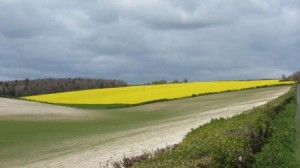 The early negotiations for yet another round of CAP (common agricultural policy) reform by the EU countries are getting some people in a lather, such as the suggestion that we must grow crops from at least 3 different plant groups, with no crop making up more than 70%, and the third crop must be at least 5% of the land area. (Grass does not count here). This rule seems to be aimed at farmers who grow very limited rotations, worse than that mentioned above, which maybe isn’t such a bad thing. There is also a proposal to return to setaside, but this is now to be known as ‘Ecological Focus Area’. So far it is unclear whether the 10% of land we have already taken out of production and put into wildlife headlands, bird food etc in our stewardship scheme will even count towards this category! What I struggle with is that every few years, our beloved leaders decide to throw everything up in the air, and give us a whole new set of rules and regulations, and just when we have learnt how to cope with these, they do it again. In 1993, 1999, 2005 and now 2014, they forget that farming is a long term business, and not something that can be easily changed every year. 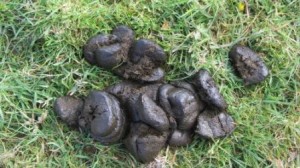 Before I get too worked up over all this, it would be sensible to remember that there are now 28 members of the EU who will have to argue/agree on the way ahead for the CAP, the Euro is still on very shaky ground, and there is a French election approaching, so absolutely anything can happen! We are not alone though, my friends in the teaching and health professions tell me that they suffer from exactly the same kind of bureaucratic interference all the time.

While we were in the middle of sowing poppies on the Knoll at the end of last month, our drilling tractor suddenly started making very unhealthy noises, so it was swiftly brought to a halt, and sent to the tractor doctor for examination. 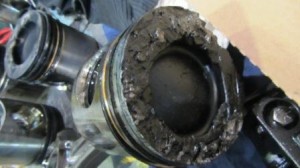 You may be able to make out from the picture that chunks of metal have been blasted off the top of one of the pistons, not a pleasant sight when we went to have a look, so a new set of pistons and liners have been fitted, and we look forward to a sweeter engine note when she returns, and an eye-watering bill….. 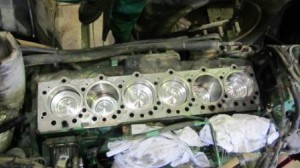 The great day finally arrived a couple of weeks ago when it was time to let the cattle out. After being cooped up indoors for several months, it is always a bit of a rodeo getting them safely to the intended field. Sure enough, with both groups of cows and their calves, things didn’t go exactly to plan, the cows from Shepherds Corner charged straight out of the gate as soon as it was opened, leaving their calves behind, and tore up the road and into a field of newly emerged spring barley, before anyone could get in front of them. 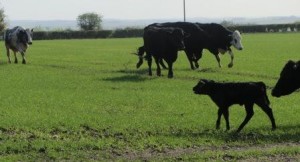 After a lot of running and swearing, we eventually got them into the right place. Sadly a similar scenario developed at Websley, where the animals should have gone straight down the track and into the valley, whereas in fact several of them got past the inexperienced gate-minder, and tore off towards Knighton, one calf even made it to Middle lodge before being turned back, caught, and sat upon the back of the Kubota, in order to be reunited with his mum. 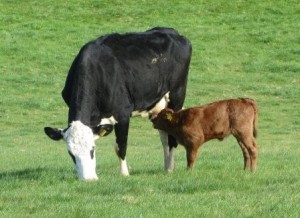 As of today, there is just one cow left indoors, still waiting to calve, kept company by Bonnington the bull, proud dad of the 48 calves out in the fields. The first 43 cows calved in just 31 days, which indicates the level of activity in the fields in May and June last year…….