The chooks have continued to lay throughout the Christmas period, 2 or three eggs per day, which is pretty good for the middle of winter, it is hard to know which ones are responsible, I suspect it is the former battery hens, rather than these handsome birds in the picture, they are only young and probably haven’t started laying yet.  They are a group of five who arrived on the farm as chicks, after hatching at Blandford St Mary Primary School last summer.  We know nothing of their parentage, other than that they must be beautiful, with a good deal of Buff Orpington and other rare breed in them. 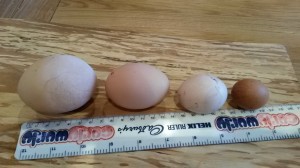 There must have been some watery eyes in the henhouse the other day when the egg on the left of the next picture was laid, the next one along would be a regular large egg, and the far right is what one hen keeps laying, with no yolk.  I have seen this before in young hens, but not for such a long period, I wonder if she will ever produce a fertile one.  The huge one was a double yolker. 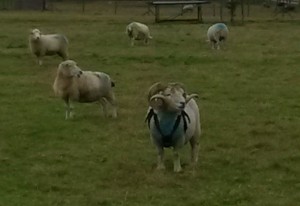 This handsome horny beast has spent several weeks next door to our meadows, near the village playing fields.  He has had a small group of ewes to entertain him, and it looks like he has certainly left his mark.  He is wearing a blue raddle, which shows the shepherd which ewes he has covered.  Traditional practice would be to use a pale colour for the ewes’ first 17 day cycle, and then change to a darker colour for their second cycle, so it is easy to see which ewes have failed to get pregnant first time round.  This gives a good indication of which ewes will lamb early, and which will be late.  A problem arose when we brought some of our own ewes down to the meadows to tidy up the grass after the cows had been housed.  We are late lambers, so our rams don’t arrive much before the middle of December, and by this time our Horned Dorset neighbour was twiddling his thumbs having finished his allotted task.  He was spotted one day laying into the dividing fence with his battering ram (head), and it was only a matter of time before he made his way into our field, and one or two rears got painted blue.  A team was assembled and went to round him up, then his owners arrived soon afterwards to take him away to pastures new.  Our usual motley gang of rams arrived a week or so later, a mixture of black faces (suffolks), white ugly faces (texel) and white fluffy faces (polled dorset we think).  Our rams don’t bother with raddles, we trust them just to get on with it. 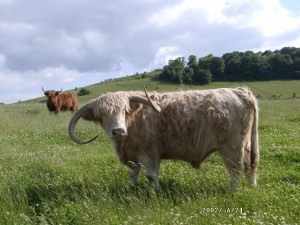 The story is more complicated in goats, the development of wholly polled strains in goats is deterred by the fact that in goats the polling gene is linked to hermaphrodism; even worse, naturally polled water buffalo  have genital defects! 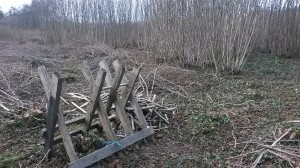 Our friend Ern Steele has been busy in the hazel coppice over the last few weeks, cutting hazel sticks to make into thatching spars.  He has been doing this for very many years, and the coppice is in good shape, cut on a seven year rotation.  This rotational harvesting means that hazel coppice is one of the richest ecosystems, where no one plant species is dominant.  The hazel is pretty dominant after seven years, but when it is cut down this allows many other plant species to thrive.  Coppice is also a haven for birdlife, small mammals and insects, which feed on the rotting brushwood which gets left behind.

Our cows are happy and contented in the shed at Shepherds Corner, munching away on silage and straw, the young stock are divided into two groups, boys and girls, in the yards at Websley, also eating silage, and much happier than trudging around in mud outdoors looking for turnips like they were last year.  The sheep are mostly on turnips now, and once they get a taste for them they are very happy, turnips do wonders for their breath, which we were reminded on Christmas day when feeding toast to last year’s pet lambs.  The sheep are much more tolerant of the weather than cattle. 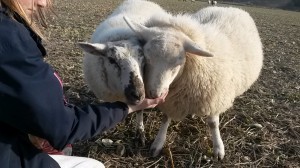 It looks like the cold weather over Christmas has done a bit of good out in the fields.  Some readers may recall that we tried to grow a crop called Borage a few years ago, it was very difficult, and cost a lot of money.  It also left behind a legacy of seed in the fields where we grew it, which comes back to haunt us when we grow rape in those fields.  There is no weedkiller that will kill borage in a rape crop, so we rely on a few sharp frosts to do this for us.  Inspecting one field yesterday it looks fortunately like it has done the trick, the borage plants look very unhappy.  The frost will also knock out any poppies that may have grown in the rape, another tricky one to control.

Silly animal picture of the month: 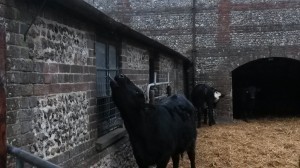 This beastie was catching raindrops coming from a leaky gutter with her tongue.  I have video footage too!