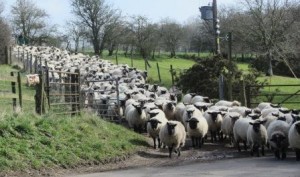 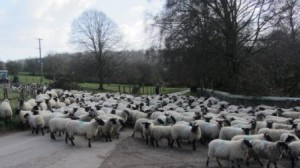 With apologies for missing an episode last month, I must also here add an addendum to the January issue:  An old farming friend, much wiser than I, has filled in some gaps in my knowledge, firstly to be a little more accurate about old-fashioned harvesting machines, the reaper-binder was the technical name for the machine which could cut the crop and tie it into sheaves, a simple reaper, which lacked the sophistication of string and knotters, could only cut the crop, and then drop a bundle of stalks on the ground, which would then be gathered and tied by a gang of harvest workers.  A scene in “Tess of the D’Urbevilles” describes this process beautifully.

Secondly, to add to the hedge-laying process I described, it should be said that after laying a hedge, often on a rotation as long as 15 years, traditionally the hedgers would throw soil back up on the hedge bank, to preserve the effect of the hedge being built on a bank, and therefore more impenetrable to livestock.  Over the years between layings, the stock would tread down the bank. 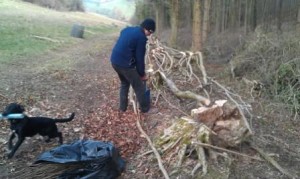 The hedge laying here has been progressing well this winter, all the easier thanks to largely benign weather conditions, and we have managed to gap up with 2000 new hedge plants so far, but having used them all up, with more gaps to fill, we will have to await further deliveries of whips, guards and canes!

This magnificent outfit was on the farm last week, spreading dried chicken muck.  This is hopefully a civilized progression from the wet muck we have used much of over the years, of which many would recognize the pungent aroma.  The dried version barely has any odour, is easier, more accurate, and quicker to spread.  The main drawback is that it can be very dusty, so we have to watch out which way the wind is blowing before the contractor starts work.  The three-wheeled monster is called a Terrogator, nic- named the Big A, the advantage of three wheels is that the ground only gets each wheel over it once, causing less compaction than a more traditional four-wheeled tractor.  The Big A tows its own loader, and a truck for going home at night, behind on a trailer, a pretty huge outfit altogether. 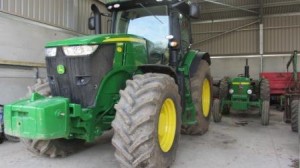 A demo tractor always causes a bit of excitement among the boys on the farm, the latest model from John Deere has been here for a few days, and each of us has been having a go in it.  It is very easy to be seduced by the shiny paint and the latest gadgets, but hard headed decisions have to be made, as the machine we hope to purchase could be with us for 10 years or more.  One of the reasons we are considering changing a tractor, is so that we can use GPS, (sat nav).  You might wonder why we should need sat nav, but it is surprising to see figures that have been worked out that show how much fuel and wear and tear can be saved by driving tractors more accurately in the field when cultivating.  It is quite hard to navigate a large tractor and cultivator to make sure the bouts match up, and a margin of error to be on the safe side, can be quite wasteful.  Sat nav takes the guesswork out of the job, and drives the tractor in exactly the right place every time.  It is very easy to program the machine to strike out across the field in a dead straight line, and then it can direct the driver to the exact place on the headland to enter into another bout exactly the width of the machine from the last, or indeed if the tractor is too large to turn sharply, you can skip a bit and go up a different bout, and create stripes across the field, then come back across later, filling in the gaps. 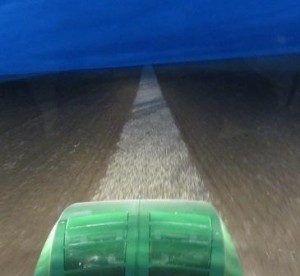 Another advantage to this system is that most efficient use of the tractor comes in straight lines, power can be wasted by the forces involved when operating around bends.  The model we are trying this week also boasts a very clever gearbox, which automatically selects the right gear and engine revs to suit soil conditions and speed desired for the machine being pulled. 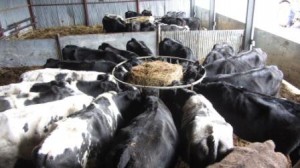 The cows are enjoying a peaceful winter in the shed at Shepherds Corner, on a diet of silage, and more silage.  Within a couple of weeks, we will be hoping for the sound of the clatter of tiny hooves, as calving is due to begin, and we are keen to see what Bonnington the bull’s offspring will be like.  Our young cattle, the ewes, and shortly the lambs too, will all be grazing turnips on the Knoll together, where we hope the electric fences hold out, because we could have an almighty muddle if they all got together.  In a week or two we will start going through the lambs to see who is ready for selling.  There is always a bit of a balancing act to be mastered in matching the number of animals to the feed available. 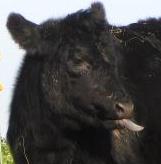 This season we have had the best turnip crop we have seen in many years, due to the long and warm autumn, and the animals are only making modest progress through them.  There will come a point, once the grass has started growing in the pasture fields, where we will have to decide how much turnip to spray off and cultivate in, so that we can sow this season’s poppy crop.

We are planning to start spring sowing this week, with 124 ha to sow, and lovely soil conditions, it is time to get going.  It will not have escaped most people’s attention that we are having the most ridiculously dry winter.  It is very hard not to be the miserable farmer, who says we are either in for a hell of a drought this year, or else a hell of a lot of rain at some point.  Whichever way it goes, it is important to get the spring crops sown promptly once the soil conditions are right, so that the plants can get their roots well down right at the start of the growing season if it’s going to stay dry, or else to avoid late sowing if we get a prolonged period of wet weather.

Silly animal picture of the month 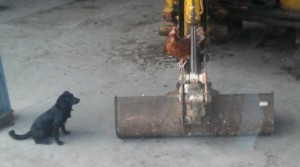