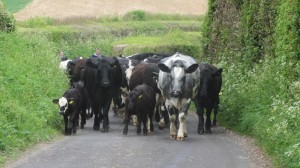 Here is one of our groups of cows and calves on their way to the annual TB test last week.  The vet came on Tuesday to give all the animals the preliminary injections, she returned on Friday to feel the bumps, the size and proportions of which determine whether the animal has been exposed to bovine tuberculosis.  If the bumps go the wrong way, it is curtains for the animal(s), followed by months of worry and further testing for the farmer and his staff.  Very fortunately for us, all our animals were found to be clear.  This testing must also be carried out within 60 days of a planned sale of any animals off the farm, so that we can be confident disease is not going to be passed on to other farms.  These regulations are part of a co-ordinated control on cattle movements to try to keep down the spread of TB.  I said enough about other vectors of the disease last month, so will not repeat myself now!

After the testing was finished, it was time to reintroduce the bulls to their lady friends, yes it is that time of year, when the cycle begins again to ensure that we will have a new generation of calves to rear next February.  The girls were very pleased to see Bonnington, and welcomed him with plenty of bellowing and jostling.  However poor old Stan, our younger bull, had been suffering lameness in a front foot for several days previously, so the vet sedated him so that she could have a good look at the foot.  She couldn’t find anything in particular, so gave him a trim up and then left him to shake off the sedative.  It was a tricky business judging how much to use for such a large animal, because you only want him to sit down, not lie on his side, yet he needs to be dopey enough to be able to handle his foot without upsetting him.  By the time he had slept it off, and he had been taken to meet his own bunch of ladies later in the day, it was clear he was no longer suffering from a headache, or from any lameness. 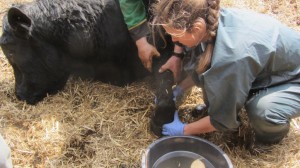 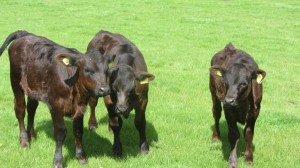 Lambing has been proceeding steadily for the last three weeks.  We managed to get the ewes shorn shortly before lambing, and they have looked a lot happier since shedding their thick coats now that we have had some warmer days.  We have had some trouble with random disappearance of live lambs, two ewes with two lambs each on Sunday last bank holiday weekend had mysteriously lost them by the Monday, and were looking very upset.  A fox had been seen the previous week tucking into a dead ewe, so we have had to assume that here was the guilty party.  We then moved the flock into what we felt was a safer field, and attempted to stake out the fox, unfortunately without success.  Since then, we have had reports of a number of foxes with young in the area.  We have not been aware of live lambs being taken like this before, as the ewes can be pretty aggressive themselves if threatened, however this level of boldness cannot go unanswered.  Friends of mine who farm sheep in Northumberland just laughed when I told them this was the first time we had had live lambs taken by foxes, they have always had to spend a lot of time and energy on this kind of pest control. 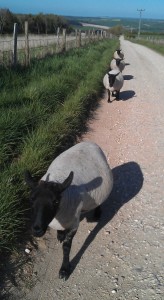 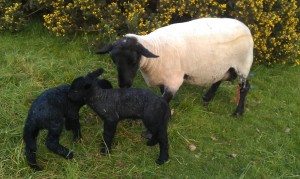 These pictures show previous years orphan lambs, now heavily pregnant ewes, being walked back to the paddock at Travellers Rest a couple of weeks ago, so they can be kept a special eye on at lambing.  The second one  shows Pongo and her two strapping lambs, born, with some assistance, on sunny Saturday afternoon.  This means that the four ewes have produced 8 live lambs between them, a good average.  Due to the usual problems in the fields, we now have 3 orphan lambs in the garden, being fed 4 or 5 times daily, making a lot of noise because they think it’s always time for another feed.

At last the rape decided to start flowering a couple of weeks ago, and how it brightens the place up after such a long and cold early spring.  We have had to spray it once since flowering began, to control a disease called sclerotinia, which ends up rotting the stems if it gets a hold.  Luckily the weather so far has not favoured its development, a rare plus side to the cool weather.  The other crops are still some way behind any other season I can remember, but the sunshine this weekend could well help them to catch up a bit. 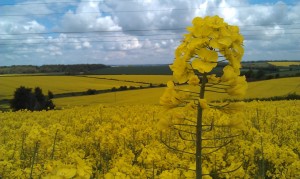 This picture tells an interesting story.  In my youth I remember that much of the steeper downland on the farm was lightly populated with anthills.  Over the years they have gradually disappeared.  I don’t know for sure what to put this down to, it is hard to see why farming would be to blame, for various periods over the years the valley sides were quite heavily grazed by sheep, and we used to spread fertilizer more widely than we do today.  However the valley fields have been on a zero or minimal fertilizer regime for 15 years now, and we certainly see more wild flowers, if the animals don’t eat them. Yet we have seen the anthills gradually disappear.  Except here: 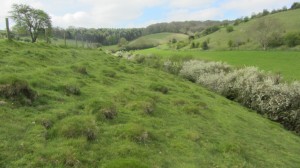 This is a small wedge shaped bit of steep bank in the valley, just beyond the Knighton pony paddocks.  What distinguishes it from the rest of the downland in the area is that it has been fenced off with sheep netting for at least 20 years, to stop sheep going down the bank and getting tangled up in the brambles at the bottom.  The sheep have been getting in there for the last couple of years, as the fence has a couple of holes in it, but I am wondering if the fence is something to do with why there are still so many anthills?  What animal with a fondness for bugs and larvae, is able to dig, and only comes out at night, might have been kept out by the fence?  TB, ground nesting birds, hedgehogs, latrines in school playgrounds, and now anthills?  What else can we pin on him? 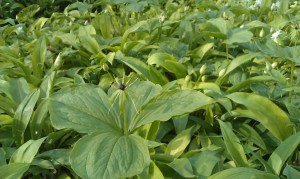 Herb Paris awash in a sea of Wild Garlic in Sutcombe Bottom, beautiful…..