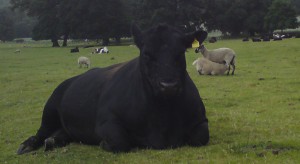 “Job done, I’m outta here.”  One smug bull, and with any luck 26 pregnant cows and 14 pregnant heifers.  After a very pleasant early summer on our meadows, our itinerant stud will be on to pastures new before long, he will no doubt be hoping for somewhere the grass is greener, because around here it is all pretty brown now, precious little pickings for our bunch of bovines  to eat, and still very little hay or silage in the barn for next winter.  As we hoped last month, our standing straw sale went pretty well, there was a good crowd of farmers, and bidding was brisk, even the oilseed rape straw, and the bean haulm all sold, which indicates the shortage of fodder.  In a normal year the rape straw would be chopped and incorporated back into the soil.  What will the rest of the summer bring? 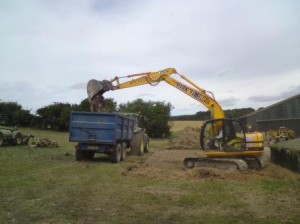 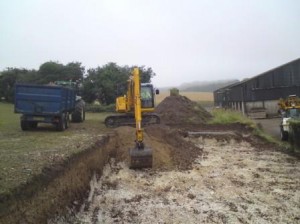 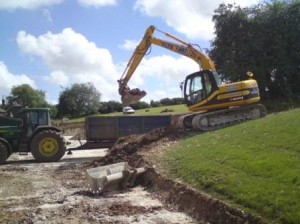 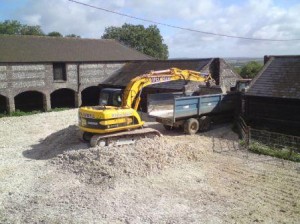 We took advantage of the lull before harvest to do a spot of excavating in the farm yard in preparation for what we hope will be a new tractor shed next year.  What use is a tractor shed that the tractors can’t fit into?  A good deal of the chalk we dug out has been used to build up the yards at Websley, where years of mucking out has gradually eroded the yard floor so that we get pools of rainwater collecting in the yard.  Now, after several tons of chalk have been slevelled by Mr Farwell’s skilled operator, the cattle will be able to stand on drier ground whilst munching their silage next winter.

As predicted last month, harvest has begun, we cut all the winter barley in good time last week, the crop was in good dry condition, and didn’t need too much drying, and the balers came along in force to bale up the straw in double quick time, and it has all been hauled away by lorries.  Yesterday and today we have been cutting the oilseed rape on Shillingstone Hill.  The crop has looked great all season, and then two weeks ago, the (briefly) heavy rain and wind knocked it all over, and most of it is now within a foot of the ground, which has made cutting it a bit slow and difficult.  The cutterbar has to be so close to the ground to pick up the crop , that from time to time it bulldozes into the soil, and before you can say knife, a load of soil and stones has pushed onto the header, and unless the operator is very quick, this all gets swept into the combine, which does no good at all, and makes a lot of nasty grinding and grating noises on its way through the machine. 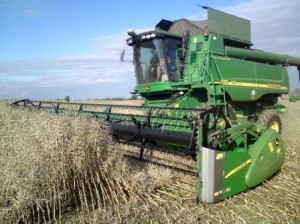 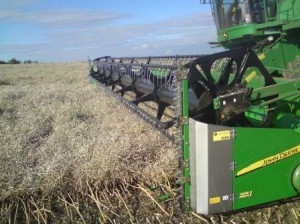 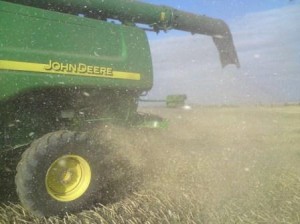 We have around 100 hectares of rape to get through, then with any luck a few days

break before the spring barley should be ready for cutting, and then the wheat will follow.  These pictures were taken today, while the dust was flying, and shortly before an important belt burnt out, which has left us with a two hour job of unblocking the front of the machine which is bunged up with a thick lump of rape stalks. 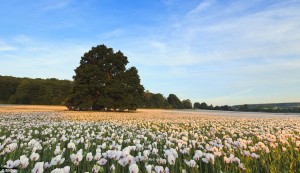 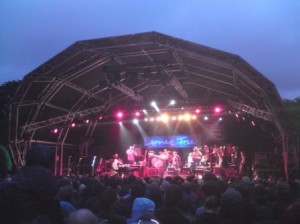 Jools Holland at the Larmer Tree the other day