There’s nothing like a visit to a brewery to get the taste buds going, especially if it’s the one that is the home of the famous 6X ale.  This week I had the good fortune to visit Wadworth’s brewery in Devizes, for a meeting about malting barley, and a tour around the brewery, including a visit to the shire horses, who still work hard delivering beer to all the Wadworth pubs within 2 miles of the brewery. 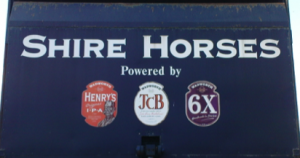 The brewery is also the home to the last Master Cooper in the country.  There are only 4 Coopers at all remaining in the UK now, as the casks that beer is stored  and transported in are now almost exclusively made of stainless steel or aluminium.  There are still a few pubs in the area who order their beer in the traditional wooden casks, and it is these that the Cooper maintains, repairs and renews.  Real ale afficionados would claim that the beer will taste better from a wooden cask.  Well whisky wouldn’t be whisky if it wasn’t fermented in wooden casks would it?

The cattle have all had their two shots of bluetongue vaccine, the ewes have all had their one, and the lambs are now old enough to have theirs.  Credit must be given to Defra for once, after some prodding from the NFU, they ordered enough vaccine (22 million doses), to dose all the susceptible animals in the country, and were the first country in Europe to do this.  The protection zones have gradually moved across the country on a county by county basis, as batches of vaccine have become available, and farmers have been encouraged to get on and dose their animals.  If everyone vaccinates all their animals, then we should be at minimal risk of further bluetongue outbreaks.  If only the same common sense and prompt action could be applied to the problem of TB……. 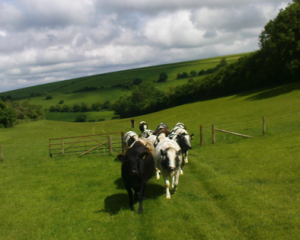 It cannot have escaped everyone’s attention that fuel prices have rocketed up in recent months.  At farm level tractor diesel has risen from 35p per litre to 65p per litre since last summer.  On a farm that uses over 60,000 litres per year that is an enormous increase in cost, do the maths.  Not only is it the fuel price that is rising though, fertiliser prices are directly related to the oil price, nitrogen fertilizer in particular takes a lot of energy to manufacture, and the price today for next year’s nitrogen is nearly double what we paid for this year’s crop. The total cost of the fertilizer we have used on the 2008 wheat crop is around £150 per hectare, whereas the latest prices for all the fertilizers we will need for next year’s crop, nitrogen, phosphate and potash, mean that the 2009 crop will cost well over £400 per hectare in fertilizer alone.  Part of the reason for these rises is because of world shortages, and fears that the UK will not actually be able to get enough fertilizer for next year’s crops.  Many countries are trying to raise food production levels, and are buying up as much fertilizer as they can.  Others are restricting exports of fertiliser so as to ensure they have enough for their own farmers.  A good deal of manufacturing capacity has closed down over the last few years, due to lack of profitability, and now that supplies are tight, the price is going up.  It will take some time, though to build new factories, and it is hard to envisage prices falling back much for some time.

On a lighter note, some of our prettier spring crops have been flowering lately, the poppies in particular have been a picture.  The borage will be bursting forth shortly, and the bees will be particularly busy, as they love the stuff. 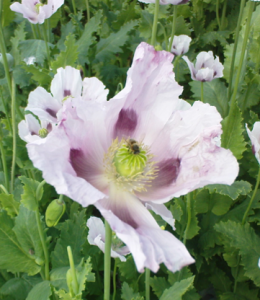 We are hoping to start wild oat pulling next week, which is always essential to try and keep on top of that expensive weed.  It can get a bit demoralizing to see how they insist on reappearing even after at least 15 years of persistent rogueing.  It is hard to believe that seeds can remain viable in the soil for that long.

We had a bit of an emergency with the estate water supply this week, the pump in the Crown estate borehole stopped working on Thursday morning, and as the reservoir only holds enough water for 3 or 4 days supply, prompt action was needed.  This supply feeds about 20 households, plus all of our farm, Enford farm, and Stuart Buckland’s dairy at Old Park farm, so time couldn’t be lost.  Local experts MJ Abbott were called in, and three men with a crane arrived on Friday morning to pull up the pump, which lives on the end of 300 feet of steel pipe in the ground at Folly.  One section at a time is lifted out, clamped, unscrewed and removed, lifted again, and so on, until at last the pump emerges.  The old one had seized, and a new one had to be assembled in Sunderland and shipped down overnight to replace it.  By 6 pm on Friday, it was all back in place and working, with the reservoir still half full. Pretty impressive. 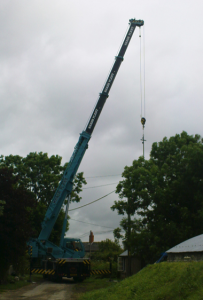 Hopefully by next month we will have some harvest news.  The grainstores have been cleaned with a lot of elbow grease and the combine is all shiny and raring to go, all we need now is a little more sunshine to plump up the grain in the fields.