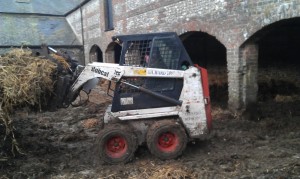 Great big steaming piles of you know what, that’s what we are working at this week, the cows have been building an ever larger pile in the yard at Websley, and there comes a point where if we don’t act, they will either be trapped inside the building without food, or else trapped outside, with food, but no water or shelter, because they can’t fit under the arches.  It is a certain consequence of constantly adding straw and silage to a group of cows with limited headroom.  A very important man who owns and drives a bobcat loader came along today, to excavate the undercover areas that larger and less nimble machines cannot, we then load up the muck and take it off to our rapidly expanding heap in Searchlight, which will be spread on the land in the autumn, after a summer of intense bacterial activity has reduced it to sweet smelling fertilizer.  The other cowshed at Shepherds Corner is due for the same treatment tomorrow.  All this frenzied activity in the sheds is mainly due to the imminent sound of tiny hoofs pattering, we don’t want calving to begin if the cows are going to need a ladder to climb out of the shed to get to their nursery quarters. 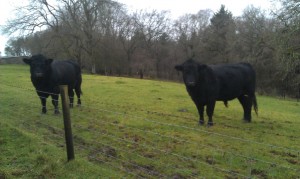 Our two bulls, Bonnington and Stan, have had to put up with each other’s company for the last few months, until this week when they were joined temporarily by a group of safely in-calf cows.  There is one cow who lost her calf early some time ago, and she has already been seen ‘bulling’ (riding the other cows), and putting her with the bulls would not only probably start a fight, but would upset our desire to maintain a neat and compact calving period.  With a 9 month gestation period for cows, farmers have to be quite strict about timing of bull activity if they want to calve at the same time each year.

The idyllic peace of the recent sunny days has been spoiled a little by the roar of distant hedgetrimmers, working their way around the fields and lanes of the farm.  At last the ground has dried out enough for them to venture off stone and tarmac, and to tidy up the alternate year hedges around the fields, which the birds have pretty well cleared of berries.  It is noticeable how much more activity there has been at the garden feeders lately, as most natural food sources are running short by this stage of the winter. 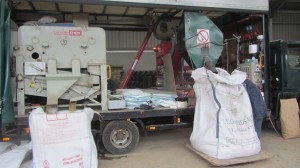 Last week we were visited by our regular seed cleaning contractors, CYO (Clean Your Own) from north Wiltshire, who spent all day turning our below average home saved spring barley seed into an acceptable sample for sowing.  Their machine took out nearly 25% of small and light grain from the bulk, it also removed unthrashed heads and the odd stone, as well as adding a seed dressing to combat the 50% levels of Fusarium disease that the seed was carrying.  This is a consequence of the dreadful weather of last summer, (see pictures and predictions from the August article last year).  Fusarium can kill off the newly germinated seedlings.  We always get our seed tested for diseases it might be carrying, so that a treatment can be applied when necessary.  Some years the seed is clean, and needs no chemical, but last year, no chance; the constant rain, and shortage of sunshine in June and July ensured that yields were thoroughly depressed, and grains were shrivelled and diseased.  So much so that nearly every lorry load of grain leaving the farm this year is being penalised to the tune of some £10 per tonne because of poor quality.  A chicken farmer friend was telling me this week how feed mills are struggling to manufacture animal feeds with sufficient energy in because of the lack of starch in most of the UKs 2012 grain, and in some cases they are adding products like imported soya oil to increase energy levels.  This raises their costs, hence having to penalise us for supplying grain which does not meet contract specifications in order to afford the extra inputs. 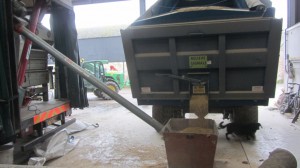 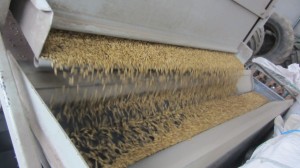 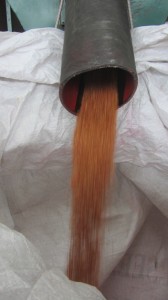 If the dry weather manages to last more than just a few days, we will start getting itchy feet, and will want to get out and move some soil in preparation for sowing the newly processed seed.  A little patience is required though, because we have some chicken manure to apply first, as well as some lime, to correct acidity here and there.  It is surprising how quickly things dry up once the weather decides to cooperate, but as with all sowing, one shouldn’t rush and force a seedbed that isn’t ready.  The soil has had so much punishment in the last 10 months that we must treat it most carefully.

As is often the case, it must be the chickens who have the last word, and so, returning to my opening theme of this month, great steaming piles of YKW are of more than passing interest to our feathered friends too, they love it, and aren’t the yolks such a lovely deep yellow? 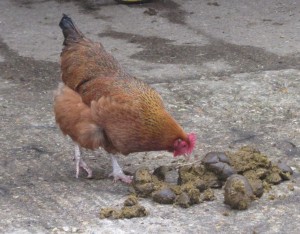