Sunny days in August usually mean just one thing, HARVEST.  If there is nothing to cut on a sunny day we will go around every field willing them to ripen, until we find one that’s as good as ready.  We always know that the weather or breakdowns will catch us out at some point so we can’t waste a good sunny day, it’s against farming law. 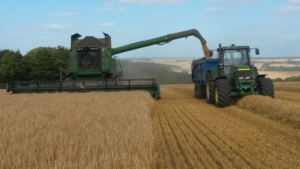 Winter barley was ripe on July 18th, and was rather disappointing, the wet and sunless June let the crop down badly, we cut it over four days and were rewarded with shrivelled light grain, and not much of it.  We moved on in to the oilseed rape on Monday 24th July, when it was just about ready, the seed was dry but the stems hadn’t dried out completely.  This kept us busy for the next week, with a rain break for much of last week.  Finishing the rape on Friday afternoon amongst showers, we thought we’d have a nibble at some spring barley yesterday (Aug 6th).  The sun came out and shone beautifully all day, the grain only needed a tickle from the drier, and the yield is much better than the winter barley, the sunnier weather in July must have suited its growing very well .  Grain quality looks good, though we will have to wait for the merchant’s word on the all important nitrogen levels after it has been tested.  Too high nitrogen means the beer will be cloudy.

Gary has been out baling all day today, 425 round bales from 40 acres of spring barley is pretty good, and good going for a day’s work.  Brendan has been chasing him around hauling the bales into the shed at Websley 31 at a time. 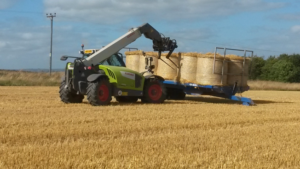 To see a skilled man at work loading bales go online here where you will also find brand new combine and baling footage. 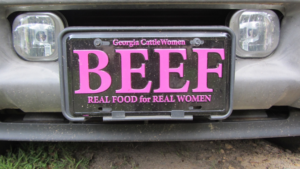 Last weekend I managed to sneak off from harvest to a wedding in Atlanta, and one day we took a drive out of town to visit a Georgian beef farm.  The lady farmer and her colleagues gave us a wonderful welcome, showing us around the farm, giving away some of their secrets, and we even got around to discussing the US election and the British vote on EU membership.  I felt both sides were doing their best to be diplomatic in situations that each could not quite believe were affecting the other.  One interesting farming titbit we learnt was that if you run donkeys with your beef herd, you get a lot less bother from coyotes (wild dogs).  Our host had acquired a pair of jenny donkeys some years back, only to find later that both were pregnant, she now has 4 jennys.  She also suffers very few coyote attacks on her cows and calves. 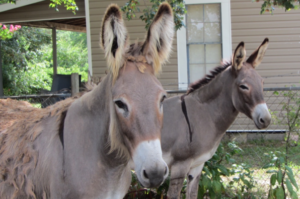 Three days into harvest we suffered a serious breakdown in the drier, the main fan died.  Its job is to draw hot air through the grain as it passes through the drier, and no fan means no drying. 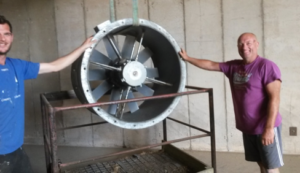 Our friends at Dorset Grain were on site very quickly and helped to remove the fan and its housing, they then whisked it off to a firm in Poole for motor rewinding.  This took two days, at the end of the process the rewound motor is baked in an oven for 14 hours to complete the repair.  Once back on the farm, the same team hauled the fan back into the roof and had it bolted together in a couple of hours.  The friendly man from DE Scott Electrical popped back in to connect up and make sure the fan was turning in the right direction, and all was finished by the end of Friday afternoon ready for a weekend of drying. 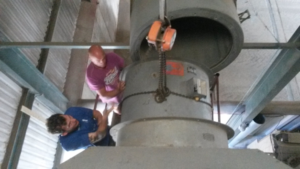 This year is the first time I have found a nest in the bolt rack in our workshop, the bird must be nuts…… 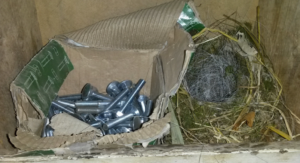