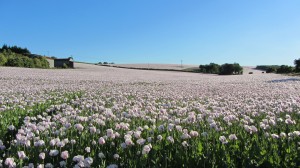 The dry weather throughout much of May and most of June and July to date have suited some of our crops, especially the poppies at Thornicombe, by keeping disease at bay, although I have my doubts whether others will make it to harvest without suffering from the lack of moisture.  Rain now would be too late to make any difference to the winter barley and the oilseed rape, and some of the wheat is now turning yellow, unevenly, showing the areas of soil where moisture is seriously depleted.  Grass is becoming a rare commodity due to the lack of rain.  Only 3 weeks ago there seemed to be a surplus, and we certainly reaped a pretty good first cut of silage, 700 bales now reside at Websley to feed the cows for the winter.  An autumn cut from some of our field margins will hopefully make up the balance for what we will need, once the wild flowers have shed their seed.  We are moving the cows and calves from field to field ever more frequently as they run out of grub and complain loudly that they are hungry.  Much more of this and we will have to supplement the brown and shriveling grass with straw in the field once we have cut some.

We are looking down the barrel towards harvest; the winter barley is only a matter of days away, and the oilseed rape is now on the road to cutting as we have applied pre harvest roundup to about half of the area, this is a handy technique, it ensures that the plants are completely dead when we put the combine in, which aids thrashing and reduces the risk of the combine innards gumming up with fleshy rape plant stems, which always take longer to ripen than the spindly pods and higher branches.  The other advantage is that any weed in the crop is dried out and crispy and doesn’t wrap around the combine header parts. 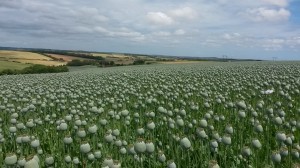 The poppies flowered for an intense few days a fortnight ago, but didn’t fail to catch the eye of itinerant photographers for miles around.  Placing them by a main road was asking for attention I suppose.

Here is a link to a short piece of video on youtube of the poppy flowers moving in the breeze  http://youtu.be/P7VBch5lB-Q

The short flowering period will hopefully mean that they will ripen evenly.  Following petal fall they now look like a huge area of little people standing shoulder to shoulder from one side of the field to the other.  One photographer, whose pictures ended up in at least one national paper, stayed up all night to catch the milky way above the flowering poppies at 1.00 am.  Ollie Taylor wins the prize for perseverance.  Here is one of his lovely pictures taken above the footpath through the middle of one of the fields. 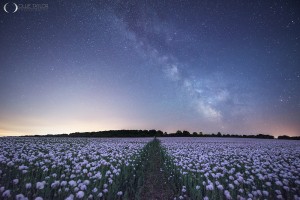 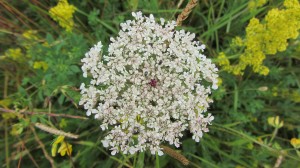 Wild Carrot, note the red dot in the centre 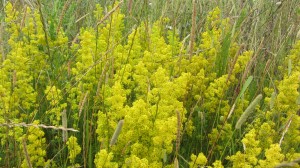 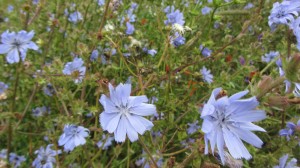 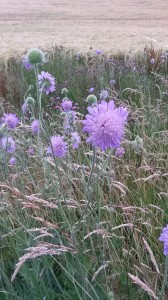 The lovely summer weather has led to a terrific show of wild flowers on the downland, in the woods, on the verges of the lanes and in the headland margins around most of our arable fields.  This in turn has encouraged a great turn out of butterflies and bumble bees, amongst many other species who enjoy a plentiful and varied supply of nectar. 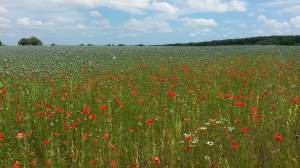 Black Knapweed is flowering strongly, pyramid orchid, yarrow, scabious, birdsfoot trefoil, ladies bedstraw, wild carrot, chicory, and many others are contributing to the of colour and diversity currently on show.  The following clip is a short embedded video file showing flowers moving in the breeze on a headland next to some barley.  I am trying this as an alternative to links to youtube clips.  I would be grateful for any feedback on which is easier to use.  It may be too slow to be worth looking!

The orphan lambs are growing well, and providing noisy accompaniment to anyone who passes their paddock, early morning walkers and runners are no exception. 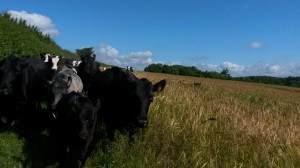 Moving the cows and calves, whilst trying to keep them out of the barley 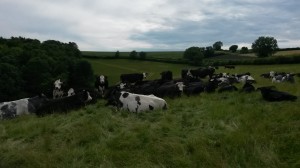 The two groups of cows and calves recently became one, as simple greed, or else amorous determination, rendered the electric fence and 5 bar metal gate dividing them useless.  We normally keep the cows divided into two groups at this time of year and we put one bull with each bunch.  After a couple of cycles we swap the bulls over, in order to cover for any unexpected fertility problems.  If the groups mix there is a worry that the bulls will fight over the one cow in the group who requires their attention on that particular day.  Fortunately there was no fighting, however it was still necessary to divide the groups up again, and take the opportunity to swap the bulls.  This was a tedious operation, requiring every animal to have its eartag checked against the master list, and for every calf to remain with the correct mother, so the catching pen, the mobile crush and plenty of temporary gates were needed to carry out this operation.  Managing this with over a hundred animals in one group is a big undertaking, especially when it was on the hottest day of the year.  Once the sorting was completed, the two groups were dispatched to different areas far enough apart to prevent a repeat.

A preponderance of foxes in the area around the farm yard has meant that our unfortunate chickens have had to be confined to the hen house for the last month.  We have had several taken one at a time, and after we saw three half grown fox cubs prancing about catching late evening insects in the paddock opposite, we realized that confinement was the only option.  Once the crops in the surrounding fields are cut, the murderous creatures will have less cover to approach the yard in, and hopefully less opportunity to steal our egg layers.  A plan is in hand to create a summer residence on wheels that will enable the hens to stay in a safely (electrically) fenced area during the summer in the future.

Over the last couple of weeks we have had a keen gang working in the fields pulling up wild oats and a variety of other grass weeds.  The idea is that if we pull up the weeds that have got through our herbicide programme, they do not get to spread their seeds, and in the long term, this should mean that we have less need to use herbicides in the future. 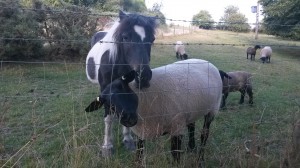 Please could I have that piece of toast I can see in your hand?