The rape has caught us out this year, racing upwards and starting to flower before the end of March.  We failed to spray it with a fungicide when we should have due to pressure of work.  We had to get the fertilizer on first because of the risk of scorch on the fast growing and lush foliage, and by the time we had caught up with that it was too windy to spray.  The advice was we’d be better to wait for the next timing, mid-flower, when we target the risk from a disease, known as Sclerotinia, which flourishes on fallen petals when they stick to the damp leaves.  The first timing should have been to control light leaf spot, and to provide some growth regulation, looking back now, we are told the risk from LLS was low this year, so I resort to the line that it was all part of a cunning plan, and that the crop was growing so fast that no disease could keep up.  That argument is sure to catch me out one day.

The season is already racing along, crops are growing fast, due to the warmer than average soil temperature coming out of winter, woodland flowers are looking fabulous, and the sprayer has been flat out applying fertilizer, fungicides, weedkillers and growth regs to all the crops. 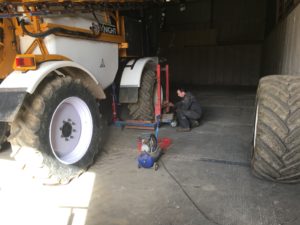 Part way through this early spring rush, the time came to change the sprayer wheels from the wide winter set to the narrower summer season ones. A problem arose when we discovered that we had forgotten we promised ourselves last year that we were going to repaint them, due to rust appearing through the old paint.  We didn’t wimp out, but got stuck in, and after a lot of rubbing down, and 5 layers of paint on each side of all 4 wheels, they look like new.  Changing the wheels is a pretty slick operation, loosely modelled on a formula one pitstop, but generally only with two people.  A pneumatic socket gun, a fancy jack, and a wheel mover all help to get the job done swiftly.  We have decided that the winter wheels could do with a paint job as well, and have again promised ourselves that this will be done well before we next need them….. 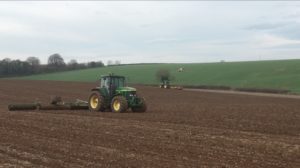 It is rare these days to find yourself working with even one other tractor in the field at the same time.  The way we organize our cultivations usually means that we wait for the soil to dry a bit between each operation, so the previous machine is usually long gone before you pull in with the rollers.  However recently we had the unusual event of 3 tractors working in the same field, plus the sprayer operating within view over the road.  Unfortunately the planets weren’t quite in alignement on this occasion, and I couldn’t quite catch all four in line. 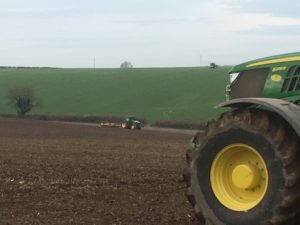 These pictures show the team nearing the end of the spring sowing campaign, we have now completed the spring barley sowing, and most of it is now emerging, in smart straight, satnav guided rows.  The poppies are also all sown, and right now are just at the tiny cotyledon stage.  They will take a little longer to turn the fields green.  This is a tense time for poppy growers, the tiny plants are very vulnerable to uncooperative weather for the first 6 weeks or so, last year we had to re-sow two fields because of poor emergence.  I am hoping we don’t get a repeat this time. 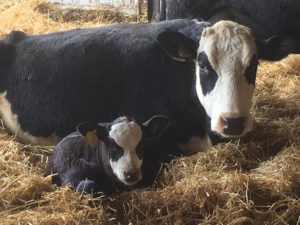 Calving has continued apace over the last month, we have now turned out the main bunch of cows with their calves, and just the last 12 remain indoors waiting to calve.  The youngstock have also been let out from their Websley winter quarters, as there is already plenty of grass for them to get stuck into.  The mucking out team are already chasing around with forklift and trailers, getting the sheds mucked out while we have some extra labour about in the holidays.

The lovely sunny weather over the last couple of weeks has brought spring in with a rush, there are already masses of wildflowers, especially in the woodlands, with wood anemone, celandine, primrose, bluebells, and in the grassland cowslips are raising their pretty heads.  On warm afternoons butterflies are active, flitting from flower to flower, I feel it is early for butterflies, so perhaps a long warm summer is ahead of us?  Either that or they know they need to get going early because it will be quite the opposite.  From the farmer’s angle a drop of rain would be good, to wash in the fertilizer, and help the spring crops to get going.  However one can’t complain at warm sunshine, especially if there’s no wind. 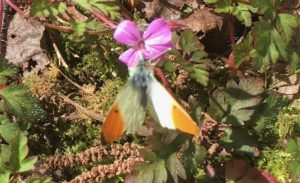 Here is an Orange Tip male, feeding on a Cranesbill flower in Sutcombe Bottom, on Sunday 2nd April.  The female doesn’t have the striking orange tips, but does have very pretty underside patterns on her wings. 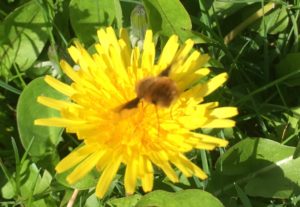 A bit of a nature ramble one Sunday afternoon revealed several natural wonders.  What I thought was a hovering bee, feeding from Dandelion flowers, turns out to be a Bee Fly, Bombylius Major, for the entomologists.  Crawling around on hand and knees with phone in hand, I managed a bit of video of this fellow, which is available on the Viewfromthehill website, along with woodlice and centipedes found lurking under the flaky bark of a rotting fallen tree, yet to be discovered by a woodpecker. 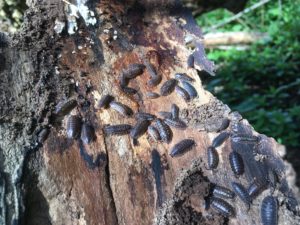 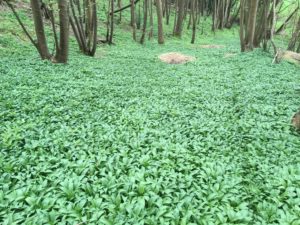 A carpet of Wild Garlic 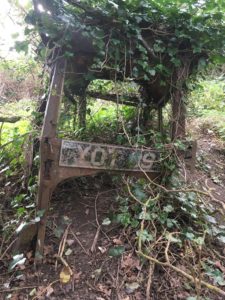 Tractor cab goes back to nature 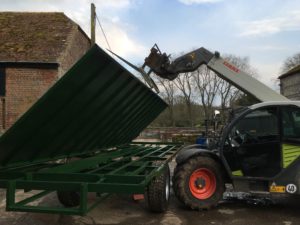 A trailer gets a new bed, axle and paint job. 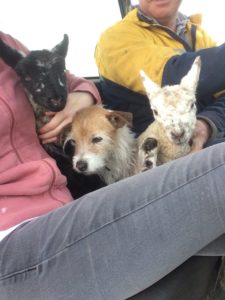 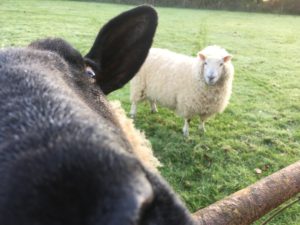 I want to be in the picture, says Rocky 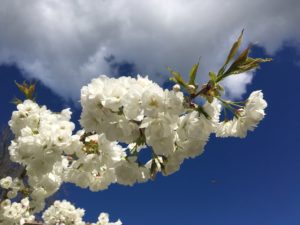