How do we get those stripes so straight?  In the old days it was a real skill, and done by eye, today a bit of cheating could have been involved, in the guise of satnav and auto steering in the tractor pulling the roller that creates the stripes.  This actually saves money when sowing and harvesting crops, or cultivating, because it means we drive in exactly the right place, neither overlapping, nor missing bits of ground, therefore fuel and time is not wasted. The grass needs rolling to make sure any stones and molehills don’t get picked up by the silage mower later in the season.

Spring is sprung; only three cows remain to calve as I write this on May 10th, and all the rest of the cattle were let outside a couple of weeks ago, always an exciting day as they so love getting back onto real grass after 6 months of silage and straw.  We need plenty of people on hand on turnout day, as the cattle love to charge about enjoying their new found freedom. 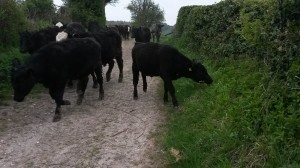 On a more sobering note, TB has struck us again.  A test at the end of February uncovered 3 inconclusive reactors.  This is a bizarre classification, defined by the size of the bumps which grow (or not) at the site of the test injections on the animal’s neck.  The injections are given by the vet on a Monday or a Tuesday, and then inspected three days later.  If there is no reaction, a simple swipe of a hand is all that is needed to check, however if there is a reaction at the site of the lower injection site, the animal  is showing that it has been exposed to TB and has the antibodies present in its blood. 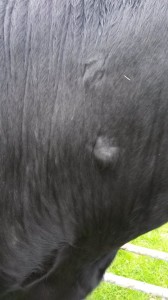 The difference in size of bumps determines whether the animal is a full reactor, which in effect is a death sentence, and results in the farm being closed for cattle movements until 2 clear tests at 60 day intervals have been achieved.  If determined as  inconclusive reactors, which seems to me to be a worse than useless status, the animals  must be isolated from the rest of the herd straight away, and then have  to wait 60 days for a follow up test, which happened last week.  During this period, the rest of the farm can trade freely, and we took the opportunity to sell 16 yearlings at market, and to purchase two new bulls.  Because 2 of the 3 inconclusives reacted fully at the second test, we are now shut down, and the whole herd must pass two successive tests at 60 day intervals.  The unfortunate animals will be taken for slaughtering shortly.  By some peculiar twist of fate, neither has a calf this year, whereas the third, which went clear, does.  In the eyes of the law, this matters not a jot; calf or not, they are taken and we could be left with orphan calves to deal with.

We very rarely bring new cattle onto the farm, we have not bought replacements for several years, and so far our new bulls have not been in contact with any of our other cattle, and they were tested before arrival.  My understanding of the situation is that our animals can only have infected with the disease by local wildlife.  There are many badger setts on our farm, and their latrines litter our fields, it is impossible to prevent the cattle from interacting with them unless we keep them in secure sheds all year round.  I have no desire to remove healthy badgers from our farm, only sick ones.  The badger cull, which so far has been trialled in Somerset and Gloucestershire, is the only chance we have been given to try to find a way to rid our countryside of this dreadful disease.  To those who say we should vaccinate all cattle for TB, I would agree, but when you look into it one finds that there is no sign of a vaccine that offers a hope of control for at least 10 years, and it would still need other measures taken to control the problem in wildlife.  In the meantime, thousands of otherwise healthy cattle are being slaughtered at huge cost to the tax payer, more and more badgers are suffering a miserable wasting disease, largely because of overcrowding, and the situation careers further and further out of control.  I would plead with those who object to a cull to please give it a chance.  30 years ago we had hardly any TB in the UK, and we had a thriving and healthy badger population, because of a targeted and diligent control programme for infected setts and cattle, which was long since dismantled. 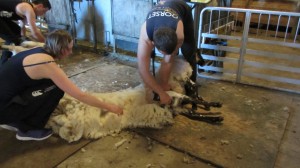 On a far more cheerful note, since we had our sheep sheared about 3 weeks ago, lambing has gradually wound into action.  Two young and fit shearers arrived one Monday morning, and by lunchtime had sheared our 230 animals.  The wool will go off to the wool board auctions, and bring in just about enough to pay the shearers.  It seems a tragedy that such a versatile fibre as wool is valued so poorly.  After such a warm April, it was just typical to find that May came in cold and wet just after shearing, however the ewes are carrying a good load and are unlikely to get too cold. 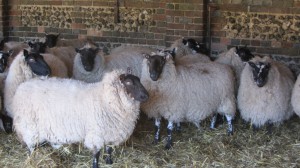 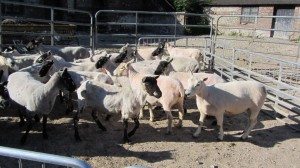 Lambing brings its usual issues, mis-mothering, shortage of milk, and the occasional unplanned death, so we expect to end up with a few orphans.  One ewe had a triplet, and not enough milk for three, so one was removed and twinned on to a ewe who had lost her lambs, along with another who had lost his mum.  After a couple of days indoors, the new happy family emerged and is now back on grass. 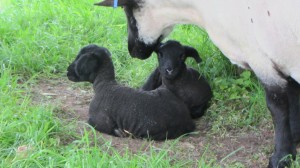 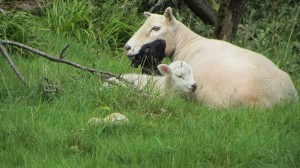 There are also a couple of lambs being bottle fed, who may end up twinned on if lucky, or else they will become  pampered pets.  This is what happens if teenage girls spend too much time with orphan lambs: 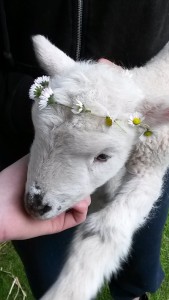 Spring flowers abound everywhere you look, the bluebells are beautiful in the woods and hedgerows, they seem to be spreading too, in various fields which are not grazed too early in the season, they favour shady spots, such as under this lovely old copper beech in one of the woods. 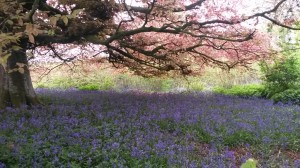 Elsewhere on the farm, the winter barley is coming into ear, we are at the beautiful paintbrush stage where the awns are just peeping out and whole fields sway gently in the breeze.  The wheat is coming on well, all the fertilizer is on now, although one or two fields are suffering a bit of scorch from liquid fertilizer applied in slightly less than perfect conditions.  Hopefully this will grow out quickly.  The dry April has meant low disease pressure, although the spray programme is largely unchanged, because to be effective, the fungicides need to be applied before the disease attacks, and anything can happen over the next two months while we hope that yield is building as ears emerge and fill.

The oilseed rape nears the end of flowering, our friend Greg Tapper spent a couple of hours filming the sprayer at work in a field of flowering rape on Shillingstone Hill, Stourpaine  can be seen in the middle distance.  The filming and this picture was done by Greg’s drone carrying a camera.  (Dronepictures.co.uk). The sprayer was applying a fungicide to keep the disease Sclerotinia at bay. 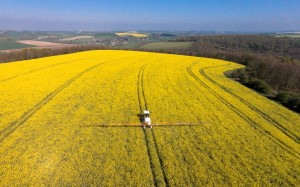 Jim Bettle and his Dorset Charcoal team restarted charcoal burning in Foxwarren woods a few weeks ago, after a winter break following a good long stint last summer and autumn.  They are creating more lovely renewable charcoal for local barbecues, pyrotechnics, pharmaceuticals, feed supplements, and a surprising range of other products.  The timber they are burning is mainly turkey oak, a non-native species, many of these trees blew down in storms over the last few years.  We are gradually felling the turkey oak, and are encouraging native species more suited to the area to take their place.  Jim struggles to get his van in and out during wet weather, when we have to tow him, or lend him our ATV.  Handling the charcoal is a very dirty job, and you could be excused for mistaking the team for coal miners.  Read all about Jim’s charcoal at www.dorsetcharcoal.co.uk 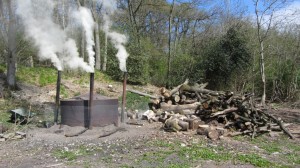