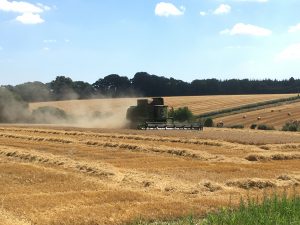 Harvest has been and gone with a whizz and a bang and a very large Phew this week.  All over in a hectic month, with very few days to draw breath.  Bearing the drought in mind, some of the crops have done surprisingly well, though the spring sown ones have definitely not.  It is a record early finish for us, and it is hard not to feel a little smug as it rained almost as soon as we finished, and the weekend has continued wet.  Many other farmers still have plenty to cut, so I hope there is some more fine weather shortly. 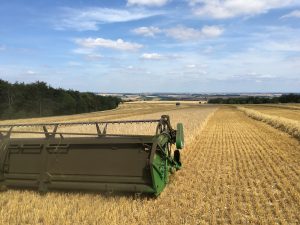 During harvest we have fielded a few breakdowns on the combine, and a broken bearing down in the elevator pit in the grainstore, but otherwise it has been a very easy harvest to reap, the fine weather has meant we have hauled in nearly all the grain at historically low moistures, and we have only had to dry 78 tons.  The loss of moisture in such grain results in a loss of weight, 3.5% in the driest, but in a wetter year one might spend the equivalent amount on drying, so we shouldn’t moan too much.  Some people might try to add back moisture to the grain, but to do it evenly and in such a way not to cause problems in the store over winter is difficult, and we will not be doing this. 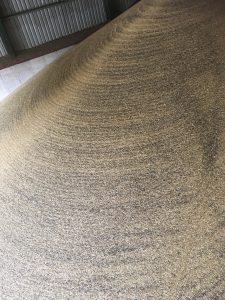 The oilseed rape makes interesting patterns as it lands on the storage heap, and colourful additions to the sample appear from time to time.  We shift out all our rapeseed during harvest to make room for wheat, some has gone to a large store in Wiltshire, and some went onto a boat at Portland harbour for shipping directly to the crusher at Erith.  Apparently the skipper of the boat called a halt to loading at one point when he discovered ladybirds in the cargo, he obviously didn’t understand how hard they are to persuade to fly away before we harvest the crop.  They are clearly pretty tough little fellows to withstand going through the combine and the grainstore machinery in one piece. 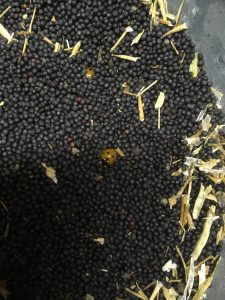 “How does a duck know which direction south is, and how does he tell his wife and all the other ducks?”  So go the words of of a great song by the Crash Test Dummies.  It came to mind whilst I was pondering the behaviour of the farmyard swallows here, they insist on flying into our workshop barn if the doors are left open, and then fly up to the windows in the gable ends trying to escape.  They simply don’t understand glass, and they will flutter against it all day long.  I have in the past climbed up a ladder to try to catch them, or waved sticks at them to make them fly back towards the doors, but the windows are high up, the roof goes even higher, and the doors are low down, and it is very hard to get them to fly downwards to escape. Leaving the large horse and cart sized doors open, with the lights off, at dusk usually works as they are attracted to the fading light outside, but during the day you can often find 3 or 4 in there. How they have the intelligence to fly thousands of miles on migration, and yet be unable to find their way out of a Dorset barn beats me.

Like many other traditional barns, ours would have been built as a threshing barn, with large doorways through the centre of the building. Horses pulling wagons piled high with sheaves of unthreshed crops would have been driven through the barn for unloading, then the threshing would have taken place through the autumn and winter, the grain stored in sacks, and the threshed straw loaded up again to be removed for animal bedding or perhaps thatching of houses and farm buildings. 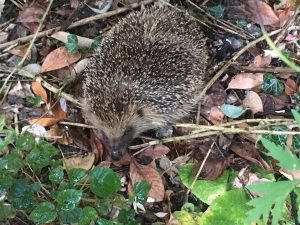 We have had a regular visitor in our garden recently, she has been seen trotting across the drive on several occasions, another was found in a flower bed a few weeks earlier, were they the same one, how do you tell one hedgehog from another?. There cannot have been good pickings for them lately, slugs and snails would be laying low in the dry weather. We left some cat food out for them one night, which all disappeared, but did the dog snitch it before we realised? 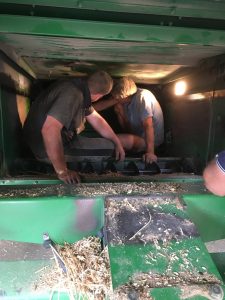 Two engineers inside the combine after removing much of the insides, in search of damage caused by a single broken bolt. The bolt secures the sieve box, a large assembly which supports the sieves which reside in the back of the combine, which, coupled with a constant huge blast of air, serve to separate grain from chaff.  The sieve box had dropped, hitting the fan which produces the blast of air, thus wrecking many of the fan’s blades, and causing its belt to burn out.  This repair ended up costing £1800, which has to be taken on the chin if we want to continue with harvest. 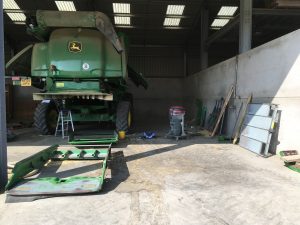 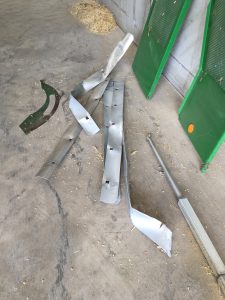 Another smaller scale problem with the side knife, essential for cutting tangled oilseed rape, was easier to fix. 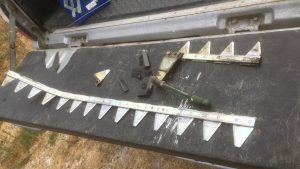 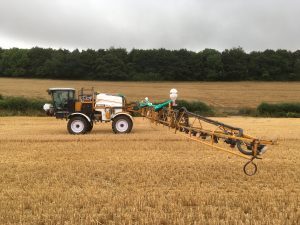 Once we had cleared the early cut wheat, we were able to try out our new modification to the sprayer, which has been turned into a part-time seed applicator.  The idea is, in a normal season, to sprinkle seeds of various cover crops into the unharvested wheat, in the hope that they will take root in the moist microclimate below the standing crop. In this way stealing a march on seeds that would normally be sown after the crop has been cut and the straw baled and removed. This could make a difference of 2 or 3 weeks growing time, significant when the days are getting shorter and we want to harvest sunshine with our cover crops, to fix carbon, and any spare nitrogen left over in the soil. This year however, the soil being so dry, and harvest being so early, we decided to wait until the wheat was harvested, so we could run over the soil with the discs, to create a bit of tilth for the seeds to enjoy. We still used the new machine though as it covers the ground so quickly. The main reason for putting the seeder on the sprayer is so that we can sow seed across our 36m tramlines, no other machine can do this.

Turnips for the sheep, which were sown in this way, are coming up well, thanks to the well timed Sunday rains we have seen recently. 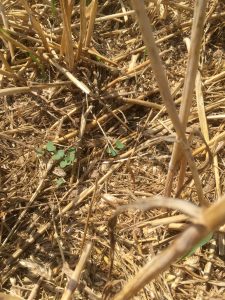 One crop that seems to have lapped up the sunshine, and shrugs off the notion of drought, is the maize, which has continued to grow strongly, and still looks fantastically green.  It is now filling its cobs, and presumably it will be ready for harvest earlier than usual, like everything else this year, so we must decide where we are going to store it until required by the digester. 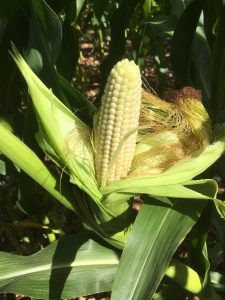 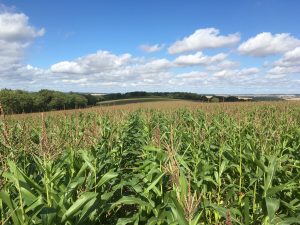 The garden has been very productive in the sunshine, with plenty of watering the beans, courgettes and cucumbers have gone mad.  Inevitably some get too big or stringy, but we know some people who are happy to help out. 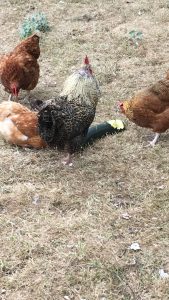 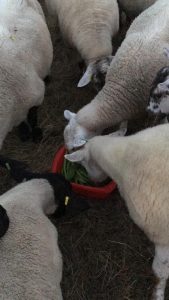 The charcoal burners have been busy in the nearby woods for several weeks, they have a good bare patch of land around their burners, and there are no naked flames, so are safe in the dry weather.  Demand for barbecue charcoal must have been good this year, Dorset Charcoal from Dorset woods, it is a mucky job, but Jim and his team are dedicated! 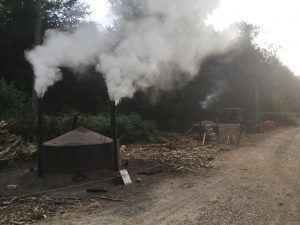 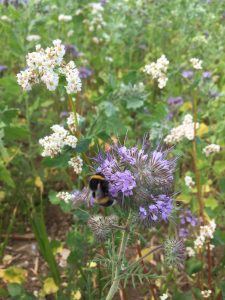 A bumble bee hard at work on a phacelia flower in one of our pollen and nectar plots. In spite of the dry weather, these plots have grown well, and are full of insects.  Buckwheat, linseed, gold of pleasure and other plants provide all sorts of food for them.

Below, the poppies look ripe to me, sure enough the harvester arrived two days later and knocked them off in a single long day. 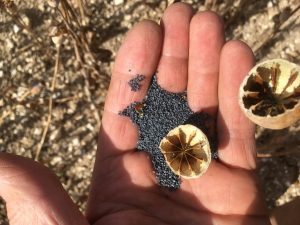 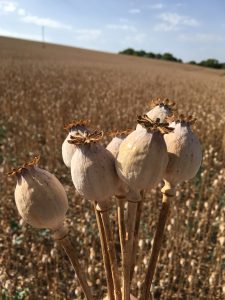 Sadly they produced the lowest yield in many years, such a short growing season, sowing having been delayed by a month, followed by drought, what chance did they have?