I have just spent an idle hour working out that every year the UK harvests enough straw to build a 1 metre square tower to the moon.  This is a bit approximate mind you, but based on 7 million hectares of arable land, with maybe two-thirds of it growing a straw based crop, and 238,000 miles to the moon.  This tower would be just 2 bales wide, so would test the skills of even the Travellers Rest rick builders, who would be struggling to keep it vertical after about 10 layers in height. 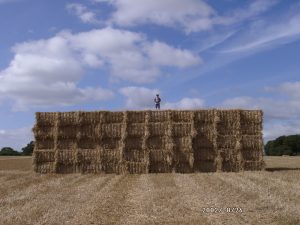 We have made less small bales than ever before this year, no small hay, and just 100 small straw, so we are all quite flabby.  Rick building is always a lot of sweat and toil, but is good team work, and every year the old stories would come out while we sweated away in the roof of some barn or other.  Arthur Voss was legendary for cutting a bale in half to fill an awkward gap, and there are always endless arguments on the best way to build a corner.  One way stacking was always controversial. 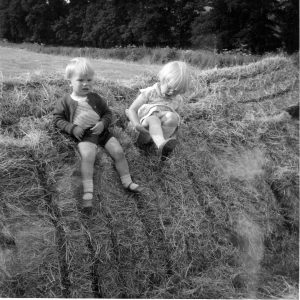 Of course haymaking and straw baling only happen in the hottest weather, so we would always try to get the bales unloaded in the cool early morning, before the sun got too high.  Trouble was, when the baler man really had his tail up, and baled far more than would fit on the trailers by nightfall, we would all have to stop what we were doing and chuck off a couple of loads in the heat of the day, hell.  Of course, we must always pick up the bales on the same day they are made, in case it rains during the night.   These days, sadly, some would say, it is nearly all done by machine, and instead of bad backs and blistered fingers, all we’re likely to get now is repetitive strain injury from using the forklift joystick, or heat rash on the backside from sitting on the seat for too long! 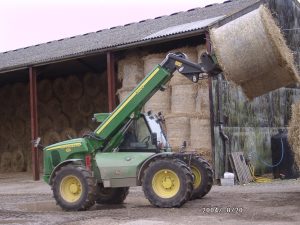 There are still one or two diehard farmers who make a lot of small bales, because it suits their system, maybe they have lots of small calf pens which are best bedded with small bales, and many horse owners still prefer small hay bales, although they sometimes don’t much like the price.  All that labour spent making it though doesn’t come cheap any more.

We finished the autumn sowing campaign last week, unless the slugs do their worst while we’re not looking, and wipe out more crops like they did the oilseed rape last month.  I am not happy about the amount of slug pellets we have had to use; they are not exactly environmentally benign, as many friends like earthworms can get caught in the crossfire.  However a necessary evil I suppose, resowing a whole field is infuriating, and expensive, particularly if a pre-emergence weedkiller has been used.  This is because disturbing the soil renders the chemical useless.  This technique works by applying a thin layer of selective chemical to the soil, and as the tip of the germinating weed tries to pass through it, the plant absorbs sufficient to kill it.  The crop plants are supposed to be resistant to this effect, however if you get awkward weather conditions at the wrong time, such as heavy rain or frost, a certain amount of crop damage can be seen, usually a price worth paying to avoid a bad weed infestation though.  Many weeds are very difficult to control in the growing crop, and are easiest to deal with pre-emergence. 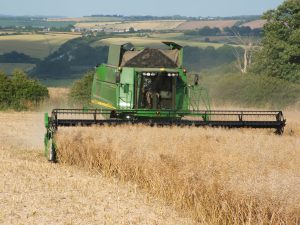 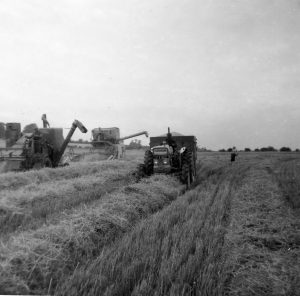 Apparently Patrick Holden of the Soil Association was on the radio last week, saying how he reckons the whole world will be organic in twenty years time.  Well what a complete joke, with a large proportion of the world’s population on or below subsistence levels of food, to think that we can feed the rapidly rising world population organically is laughable.  When organic crop yields are less than half those of non-organic systems, where are we going to find the extra land required to grow it, the moon?  Which I think is where we started…….