This has been the wettest June recorded here since 1991.  115 mms have fallen this month, 123 in 1991.  The drought of early spring, and the heat of April is but a distant memory, the barbecue is sheeted down, the garden chairs are slowly rotting under a tree.  If the weather truly is performing in two month cycles, then hopefully it might stop raining in about a week.  We can only hope.

Where do I begin with TB? 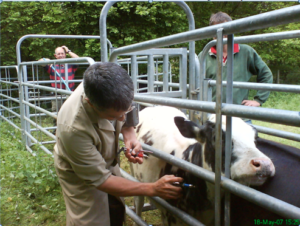 We had a TuBerculosis  test here a few weeks ago, as shown in the picture, our local friendly vet spent two afternoons with us, injecting all the cattle with test serum, then returning 3 days later to read the bumps.  If there is a reactor, the two lumps will be noticeably different to a non-reactor.  A reactor must be taken away to be slaughtered, for which the farmer is compensated, then the dead animal is looked at in detail for real evidence of tuberculosis, by inspecting the lungs and lymph nodes.  Fortunately all our animals were clear, reactors are less common in younger stock.  We are in a four year testing cycle, recently demoted from a 2 year cycle.  However we had to test our animals because the farm who supplies our calves broke down to TB in the early spring.  This is not the first time for them, it always seems to happen in spring, shortly after the cows go out to grass.  When they are shut up indoors during winter, they don’t seem to get TB, it only appears when they go outside.  Funny that isn’t it?  It is a closed herd, which means that they breed their own replacement cows, and do not bring animals in from other farms, so the disease cannot get in that way.  There are hundreds of farms like this, where the only possible explanation is that TB is spread to the cows by badgers when they go outside in the spring.  Farmers have known this for decades, yet the latest announcements from the Independent Scientific Group, which started its infamous Randomised Badger Culling trial 10 years ago in Devon seem at first glance to dispute this.  The ISG group draws all sorts of conclusions from this trial, which was long ago discredited, largely because of constraints imposed on the trial scientists by Ministers, including an inadequate number of days of trapping per year, culling at the wrong time of year, and ineffective culling methods,  not to mention interference by saboteurs, which all led to very low levels of trapping.

The idea of the trial was to try to prove whether removing all the badgers from a TB infected area would lead to a reduction in TB in cattle. It looks like they never managed to remove all the badgers from any areas, (they were not even allowed to use gassing).  So how they feel they can draw any scientifically rigorous conclusions at all completely baffles me.  It would seem that the whole trial was a completely wasted opportunity which has answered none of the questions everyone has been asking for years with any kind of authority because the whole thing was organised so badly from the outset.  Once again a scandalous waste of public money by incompetent politicians.  Where have we heard that before? 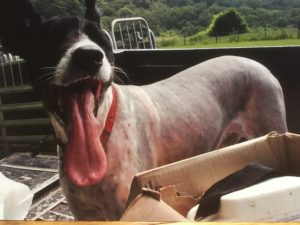 The hot dog picture was from a big sheep mustering session early in June.  After the shearers had shorn all the sheep, they thought the old dog looked like he needed a trim up too, and he loves his new all weather hairstyle.