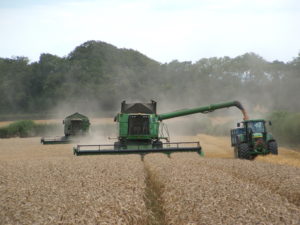 Our wheat harvest finished on 16th August, the earliest we have finished for very many years, by the 26th we had finished the beans, and which left us only with the Sunflowers, which are notorious for their lateness.  By the middle of September they were still pretty green, and still a long way off cutting if we left it to nature, also, the seeds being a good deal riper than the stems and heads, were becoming a tasty target for all the birds in the district.  Positive action was required; we decided to spend quite a lot of money on a desiccant, and a contractor with a high clearance sprayer.  The chemical (also known by its advertising jargon as ‘Sunshine in a can’) did the trick, within about ten days the crop was ready to cut.  Last weekend being a bit damp, we had a go on Monday, and managed to get some seeds into the tank, although they weren’t so keen to come out again being quite damp. 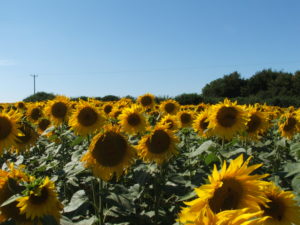 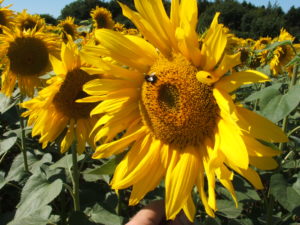 The art of cutting sunflowers with a combine requires speed mainly, to encourage the heads to fall into the header, rather than forwards and onto the ground.  Cutting in the sunny weather on Monday and Tuesday afternoons finished the job, and since then I have been messing about with the 40 or so tonnes we collected, in the grainstore.  They are now down to about 9 percent moisture, which should be safe for storage until we load them into lorries to go to Suffolk for cleaning and bagging and sending to the RSPB.  The RSPB website sells them in varying sizes of bags, for rather more than we are to be paid! 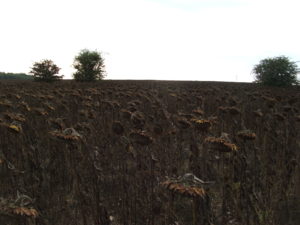 Generally this year’s harvest was a bit below average, largely I feel because of the exceptionally dry spring and summer.  It was only the good rainfall in May which averted a potential disaster (rain in May fills the barn with corn and hay).  Strangely, or annoyingly even, quite a few farmer colleagues locally say they had a pretty good harvest, so then I start wondering what we did wrong.  Not enough fertiliser, badly timed spraying, the wrong varieties, combine wasting too much from bad driving, or simply the wrong combination of sun and rain at the critical times?  I favour the last!  At least the harvest itself was fairly easy, and we didn’t have to burn too much diesel at nearly 40p per litre for drying the grain.  It was a frantic dash, with very few wet weather breaks, 35 days cutting in 45 days from start to finish, which is pretty fast and furious for 1700 acres.

We spent the last few days of August sowing next season’s rape crop, into a dry and very dusty seedbed, fortunately since then there has been enough rain for it to germinate, and it now is looking pretty respectable.

Rape is one of the best break crops, it usually allows for a much better following wheat crop than after most of the other break crops, even though in its own right it barely breaks even financially if costed honestly.  Only when averaged over two years with the following wheat crop does the financial side stack up.  Our other break crops include beans, naked oats and sunflowers, as mentioned above, none of which perform any better than rape.  Why grow them at all I hear you shout, well we could fallow half of the farm I suppose, but that would provide no return at all for a whole season, rather than a very poor one from these break crops, and we do fit in a couple of barley crops in the rotation on most of the farm, which make a fair contribution, though not comparable with wheat.  We employ a rotation roughly as follows on most of our land: wheat, spring barley, winter barley, rape or other break crop, and then back to wheat.  This is not set in stone, and sometimes it will just be: wheat, break, wheat, break.  The individual crops can perform very variably, and it is the five year average performance that really matters. 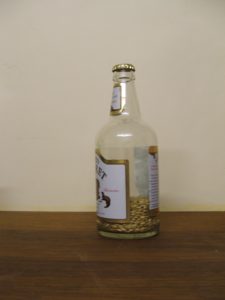 This picture of a beer bottle, demonstrates how much barley is used in the making of a pint of beer, not much use until it has been malted of course, but an interesting amount.  A very simple product, beer, only water, malt, hops and yeast.  A good recipe and a skilled brewer obviously helps. 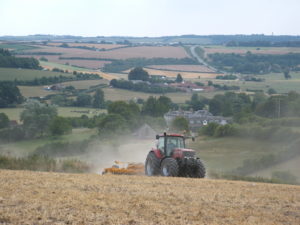 Since the beginning of last week, our main priority has been the sowing of next season’s winter wheat and barley crops.  The rain we have had has provided some desperately needed moisture for the seedbeds, which a couple of weeks ago were parched.  This week’s seedbeds have been lovely, and the seed has gone into the soil in almost perfect conditions.  As I write, of course, it is too wet to do any land work.  We have sown around 140ha of this autumn’s campaign so far (plus around 90 ha of rape), leaving another 200 to do.  On an average day we can sow around 30-35ha. 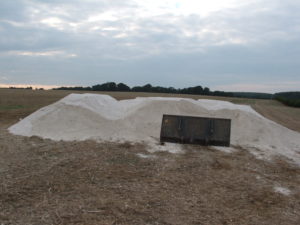 Before sowing some of our fields needed a bit of lime to keep soil acidity status on the right side of neutral. 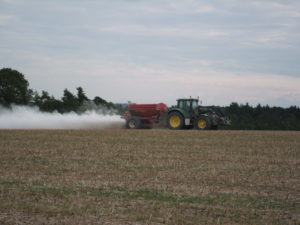 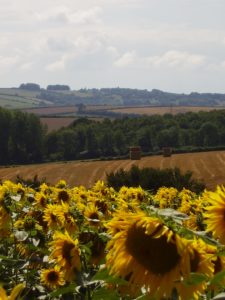