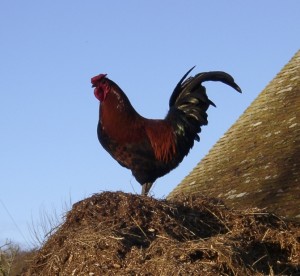 Last week we were visited by our seed cleaning contractors, who come twice a year to clean, and if necessary dress with a fungicide, our seed for sowing for the following season.

We set out to sow as much of our land with home grown seed as possible, this may sound obvious, but the seed production companies (mostly large multinationals) would much rather we bought their seed, which often comes in nice colourful bags, and of course costs more than home-saved.  We save our own seed for practical as well as economic reasons; we are always assured of plentiful supply and are not held up by late deliveries.  We can be reasonably confident of the quality of the seed as we have each variety tested for diseases and germination before cleaning, which is rarely done by the seed companies before delivery.  If the seed is free of disease, then we don’t need to waste money treating it with fungicide, also we are using less chemical, which is probably a good thing.  Seed bought from the seed companies is invariably treated, and few of them offer the option of testing and optional treatment, a cynic would say that they make too much money out of selling the chemical to do otherwise. 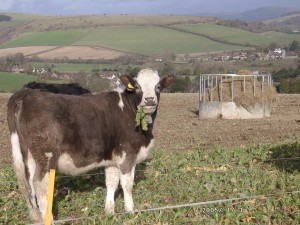 We always buy a small quantity of fresh seed each year, which we can save our seed from next time, this is harvested separately, and kept until the mobile seed cleaner arrives, which thoroughly cleans it, to remove weed seeds, chaff, small seeds, unthrashed heads, etc.  Then it is weighed into bags weighing 750kg, which will fit comfortably into the drill two at a time when we go drilling.  Some years ago, the seed companies realised that increasing numbers of farmers were saving their own seed as prices kept on rising, and they said this was threatening the future of the seed industry in the UK, so they clubbed together and managed to impose a royalty scheme on home-saving seed growers, similar I suppose to a kind of copyright.  They do have a point, but of course there are plenty of arguments about what the charges should be, and how many people do not own up to how much home saved seed they use!

Last week we treated about 30 tons of spring bean and barley seed, enough for about 44 hectares of beans and 85 hectares of barley.  I wonder whether we will have managed to sow some of this before the next issue hits your doormat?  The ground is quite dry again now, and winter rainfall is still nowhere near the average to date.  By the second half of February we will be looking to get some ground cultivated ready for sowing if the weather allows. 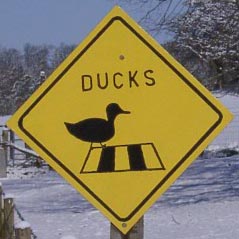 Lastly a request for information: this picture shows one of two home-made road signs we put up here a couple of years ago, the first of which was stolen a couple of months ago, and the second of which was taken last Sunday night (Jan 23rd).  If anyone by any chance saw anything, or sees one of them anywhere, please let me know.  They were made as a Christmas present and took ages to paint.