As predicted in my last broadcast, harvest did indeed get underway early this year, the best contrast is shown by the spring beans, which we cut on the 16th and 17th of September last year, but which we cut on the 18th and 19th of August this year.  As I write, most is now safely gathered in, except for a little late spring rape, and around eighty acres of linseed, which so far is proving an absolute pig to cut, either it is not fit, and we are simply too impatient to get the job finished, or else the combine drivers are incompetent!  Linseed, being closely related to flax, which is well known for its fibres (used for linen), is tough old stuff.  It is very stringy, and can put a lot of strain on the combine (and the driver), it tends to wrap around important parts of the machine for no apparent reason. 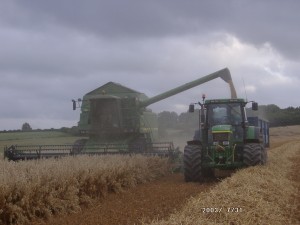 Apart from the trials of the linseed, we have had an amazing run of harvesting, cutting a total of 1130 acres of oats, spring barley, wheat and rape on 20 consecutive days.  Even with a little help from a couple of demonstration machines, keeping this up for an average of 56 acres per day with a gang of 5 isn’t bad going. 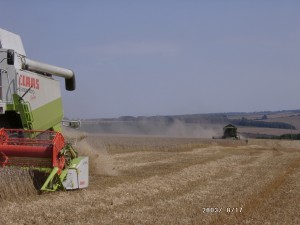 Our friendly straw baling contractor was close behind the combine, so that the fields were cleared quickly and Norman was soon in with the cultivator, to break up the ground as the first operation for next year’s crop.  We like to encourage a good chit of weeds by creating a stale seedbed, to reduce the weed burden in the following crop. 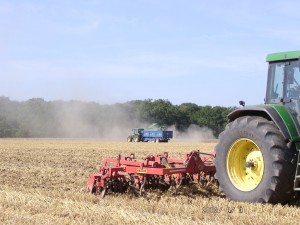 Out of a total of something over 4000 tons of grains cut and hauled since mid July, only about a quarter has needed drying, with a consequent dramatic saving on fuel, although this year a problem has been the grain entering the stores at temperatures well over 30 degrees C, which especially in the case of malting barley, can damage the germination.  Cooling the heaps as quickly as possible by blowing cool air through them is essential.  On the whole yields have been around average, spring barley being a pleasant surprise, spring rape a serious disappointment.  The combine has behaved pretty well this year, a lot to do with the hot dry weather conditions, although half of a boiling hot day had to be spent removing, blasting out, and replacing the radiator. 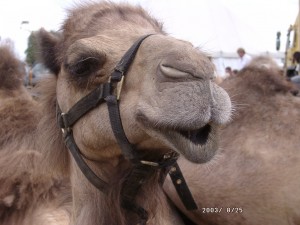 The best of our barleys this year will hopefully end up in beers like Marston’s Pedigree, Timothy Taylor’s Landlord, or various Ringwood Ales.           Cheers.