To focus the mind before we started harvest, in July a small bunch of farmers visited the Ringwood brewery to research in depth just what happens to our barley and what it tastes like when mixed with hops yeast and water.  The answer was refreshingly good, much of the barley turns to alcohol, and if a fact in such a place could be described as sobering, it is the one that a tonne of barley is enough to make 10,000 pints of beer.  This must mean that the barley in our store could be involved in producing around 10 million pints of beer over the next few months…..

Our shiny new grain store is now not quite so shiny, the process of filling it with grain deposits a layer of dust all over everything.  The store has certainly made life easier this harvest, saving a lot of double handling and general panic.  The weather conditions meant that if we could snatch an afternoon cutting grain at 22% moisture, the next 2 days would be spent drying it, using up to 15 litres of diesel per tonne.  You can work out how much it cost, we cut 150 to 200 tonnes per day.  The picture below shows that we were so nervous about being left with acres of sodden straw in the fields where we needed to get on with cultivations for the next crop, that we made sure we had the baler in the field right behind the combine.  Fortunately conditions didn’t get to the terrible state we were faced with in 1992, and the weather eventually came right just long enough for us to finish, with a couple of days to spare.  The downside is thatUKfarmers have now got a low quality wheat crop to dispose of on the world market, which is in a very depressed state due to bumper crops in many areas of the world.  The lack of breadmaking quality wheat due to weather spoilage will mean imports of better quality stuff from elsewhere, adding insult to injury. 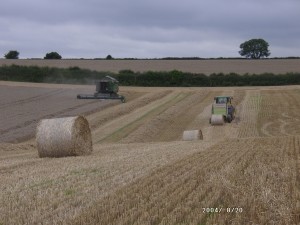 A light on the horizon is the project planned by Wessex Grain at Henstridge to build a bioethanol plant, which will produce a carbon neutral fuel from grain, which can be mixed with petrol to put in cars, and which will provide a new market for grain farmers in Somerset, Dorset and Wilts, if only the authorities can be persuaded that it is a good idea, and if the renewable energy obligation can be made to work.  This is a mechanism, which if fully implemented will mean that oil companies can choose between paying extra duty on all 100% non-renewable petrol, or qualify for subsidy (paid for by the extra duty) by employing a proportion of renewable fuel in their products (probably 5% to begin with).  Petrol/bioethanol fuels are widely available in much of Europe, as is biodiesel, which is slowly catching on in the UK.  We are now using biodiesel in our road vehicles. 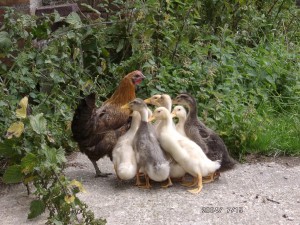