One of our family members is working on a large arable farm near Stamford in Lincolnshire, where this week they are still lifting sugar beet. The beet can only be harvested while the ground is dry enough, and not frozen, so when conditions are right they have to get a shift on.  This photo shows a queue of lorries on the farm road waiting to be loaded with beet to take to the British Sugar factory up the A1 at Newark. The beet harvesters work long hours lifting the beets out of the ground and shaking the soil off them.  The sugar-packed roots are then piled up alongside a convenient track or road where the loading machine can pick them up and convey them into the waiting lorries 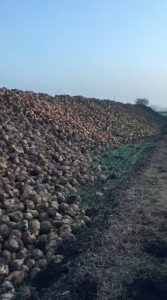 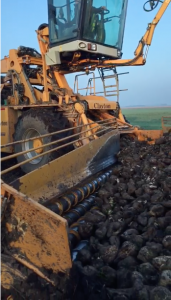 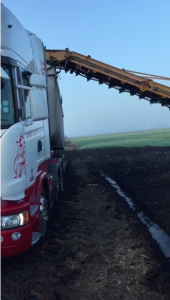 The factory takes in the loads of beet, washes and processes it into sugar and other products, such as animal feed, in the form of sugar beet pellets.  For every ton of clean beet you can expect 150-200kg of sugar, UK grown sugar beet provides around 50% of the UK demand for sugar.  It is a spring sown crop, usually harvested in late autumn and winter, which farmers will hope to follow with a late sown crop of winter wheat.

Shortly after Christmas we had one of those amazing days where the sun shines on the hill dwellers, but the valleys are filled with cold and clammy fog.  This what it looked like on 27th December, looking across the Stour valley from the south towards Stourpaine, Hod Hill is lurking under the clouds in the centre of the picture. As we walked down into Websley wood, we found an eerie atmosphere in the edge of the cloud amongst the trees. 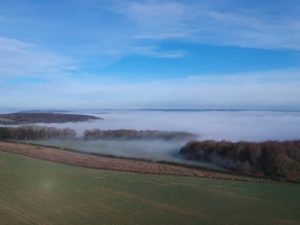 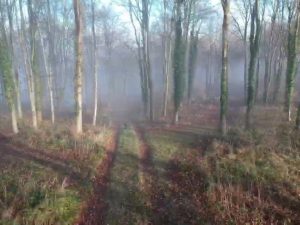 Our sprayer caused a bit of trouble last month, an oil leak was spotted emerging, somewhat ominously, from a rather expensive looking aluminium block, which takes the main flow of oil from the oil pump, which is directly attached to the engine, and distributes it to the steering system and the boom folding mechanism.  This means that every time you turned the steering wheel, or tried to fold or unfold the boom, oil spurted out under high pressure. Brendan first noticed there was a problem when the sprayer ground to a halt having run out of oil, the leak being impossible to see whilst driving. Being entirely hydrostatic, it needs oil to drive the wheels as well as everything else. 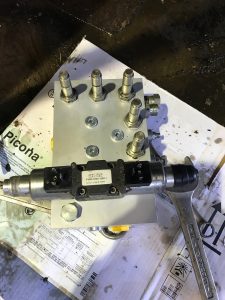 It turned out that the flow of pressurised oil through the aluminium block, for the last six years, had worn away the metal in one place, so much that a small hole opened up to the outside world, but being hidden by the bracket to which it is fitted, the actual leak was invisible.  It took a great deal of dismantling and close examination with a torch to finally identify the problem.  Then we had to call in a skilled man from Knight Farm Machinery, the company from Rutland who built the machine, to bring us a replacement part, and fit it.  On the same day he also carried out the sprayer’s annual test, to ensure that it is fit for safe and accurate spraying, a requirement of the farm assurance scheme we belong to, a part of the Red Tractor scheme.  That lump of aluminium cost more than £1000.

Since the festive break, we have resumed loading out lorry loads of maize silage for an anaerobic digester, at a rate of two loads per day.  This has caused a bit of a problem on days that we also have to load grain lorries, the chalk floor beneath the silage heap has got a bit churned up by the handler on wet days, so it gets plastered in mud. This means it needs a thorough washing after loading silage before it can go anywhere near clean grain.  This a is a bit tedious for the operator, but at least the dog enjoys it. 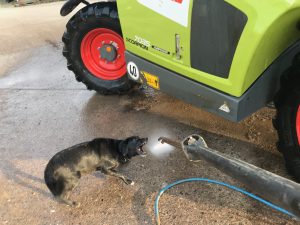 Every load of silage taken by the lorry has been accompanied by the arrival of a corresponding load of spent digestate, a lovely looking soil conditioner, which we hope will enhance biological activity in our soils.  It has to be tipped on concrete in the yard, as there is no way you would risk taking an artic into a field at this time of year.  Then we distribute it to heaps in various fields from where it will be spread later in the spring. 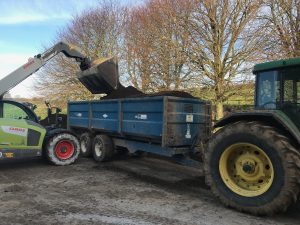 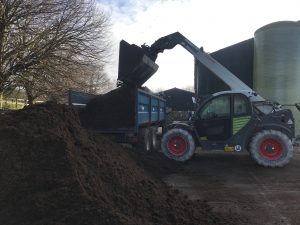 The current dry weather is very welcome after the soakings of November and December, we have been able to haul the digestate out to the fields without making enormous muddy ruts, the sheep have remained happy in the turnip fields and have not trodden too many into mud, and the cattle in the yards at Websley are not using up as much valuable straw as they would in wet weather. 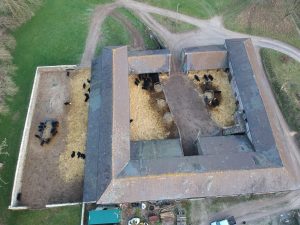 Not only that, but it means that the chooks can do what chooks love best, and that is to have a good dust bath, unheard of in a normal January.  Prepare to get wet! 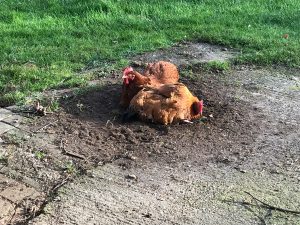